Review: ‘Daisy Pulls It Off’ 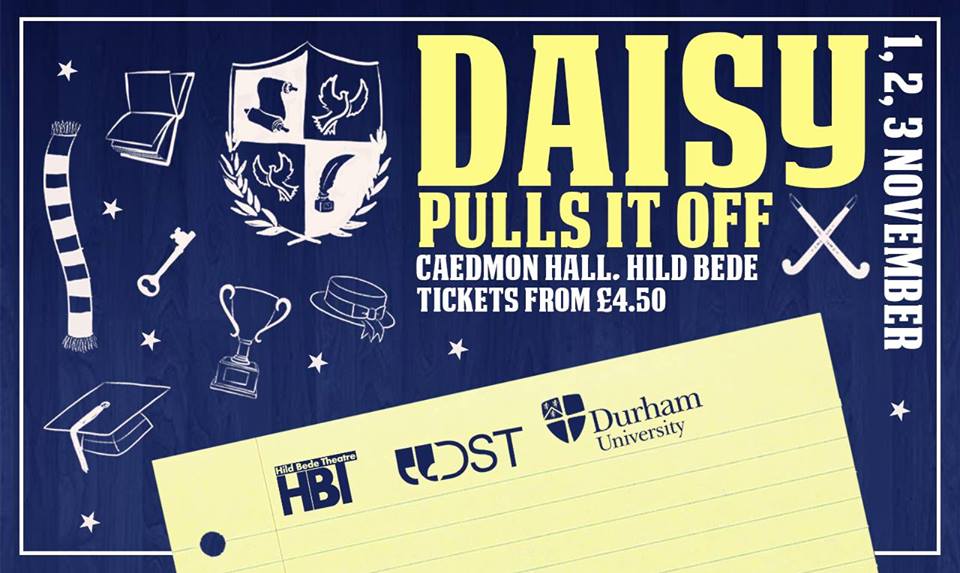 In the rather appropriate venue of Hild Bede’s Caedmon Hall, which could easily be mistaken for an assembly room in any secondary school from around the country, Hild Bede Theatre’s production returns its audience to their high school days of high school plays before the performance has even begun.

A technical malfunction spares only one pair of overhead lights, which unfortunately works against some of the actors’ efforts and leaves many faces and actions in semi-darkness–although the cast shows commendable commitment to the performance by persevering regardless.

“…their despair at what Daisy’s arrival might mean for the standards of the school is both amusingly and intelligently performed.”

First-time director Frankie Haydon-White’s staging is simplistic but not simple, at once recognisable as a high school but also producing a sense of high school, patched-together amateurism that is perfectly suited to the play. There is an upstage centre blackboard, which doubles vitally as a portrait which proves instrumental to the protagonists in their search for the coveted ‘Beaumont treasure’; the remaining facets of the story are navigated by a whirling arrangement of chairs and props. A cluster of stair blocks becomes a surprisingly effective cliff edge, and a choreographed hockey match, complete with hockey sticks and sports manoeuvres, provides a refreshing dose of activity–even when some missteps cause a burst of amused, fourth wall-breaking laughter among the cast.

There are moments when the direction is truly on the ball; audiences around the world continue to love this play because of its relentless spoofing of English stereotypes (“Jolly good!” “Top-hole!” “Spiffing!”), and Haydon-White’s use of these characterisations form the production’s greatest successes. Antagonists Sybil (Beth Mortimer) and Monica (Georgia Crown) are a seamless pair and perfectly cast; their despair at what Daisy’s arrival might mean for the standards of the school (“…and what about England…and the Empire!”) is both amusingly and intelligently performed. Also of note is Phoebe Masters’ Clare, whose accent–which is about as posh as one can go without attempting a direct imitation of Queen Elizabeth II–is a delightful and delightfully-consistent caricature.

Lauren Hayes is a natural in the title role, and balances well with best pal Trixie Martin, played energetically by Sophia Pym. There are some occasional slip ups and overlaps with lines, but it is easy to forgive both when they carry between them such a great portion of the narrative weight.

“The only crucial problems are when lines are rushed through a little too quickly, as this hasty delivery frequently causes important narrative developments to become lost.”

Though largely delivered well, there are more than a few moments that fall just short of realising their comic potency. A scene in which groundskeeper Mr Thompson (Ben Harries) trips through the classroom and sends flying a basket of apples, for example, draws laughter mostly for its bizarre and incongruous timing, and it isn’t certain whether this is its only intended effect.

The only crucial problems are when lines are rushed through a little too quickly, as this hasty delivery frequently causes important narrative developments to become lost. This clunkiness seemed to plague the transitions between scenes, too, although in fairness, this was more of an aesthetic matter than a dramatic one.

That said, there is real comedic potential in this production, and while the cast are obviously conscious of these (easily-fixable) pacing issues, it is once again their commitment to the performance that redeems and amuses. Having rehearsed for only two weeks, this production is an impressive reminder of what can be achieved with great material and a dedicated cast & crew.