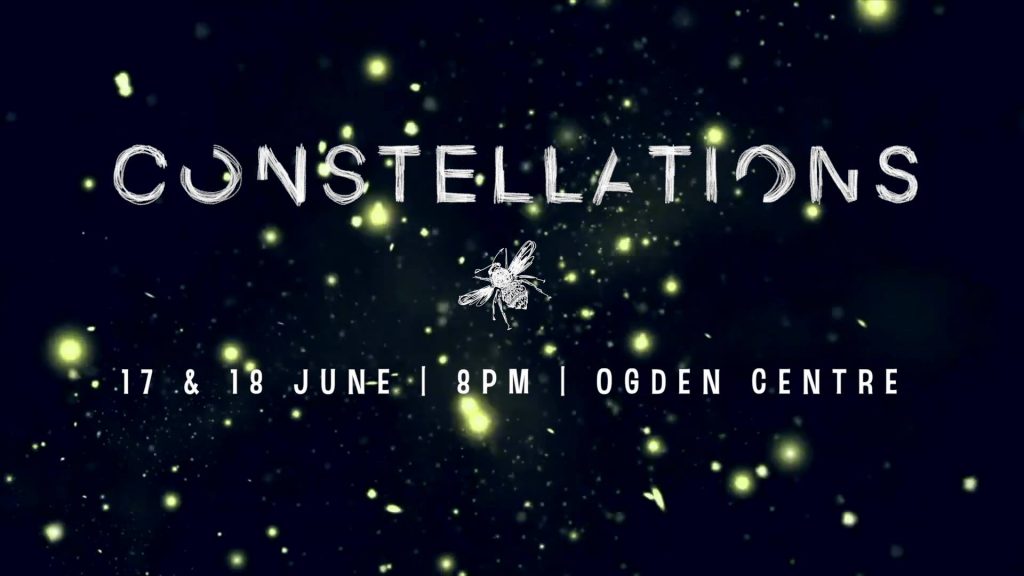 ‘Constellations’: string theory, time as a human construct, free will as an illusion, questions about the reasons and purpose of our existence. A non-linear structure and an extremely sparse stage in a room with all the lights on. Ready for a relatable, funny evening, where human nature is at the forefront?

We follow Oliver (cosmologist) and Roland in their relationship and see the infinite ways it could unfold. Scenes repeat themselves with role-reversals, different outcomes or the same script infused with different emotions and body-language. This demonstrates Oliver’s favourite thing to talk about: the fact that ‘every decision you have ever and never made coexists in an infinite number of parallel universes’.

Yet it isn’t confusing, and it isn’t repetitive. In scene transitions, the two move like emotionless robots, dazed and out of touch with reality, into their new positions. Sometimes they hold hands in these moments, before they snap back into focus when the bee-buzzing sound overhead stops. It’s slightly bizarre, and I don’t think I ever really got used to it, but it helped us to predict which scene would be repeated next. Even when jokes were repeated, they didn’t lose their humour, and Mark Woods (Oliver) and Jack de Deney’s acting had the potential to make or break the piece in this respect – luckily it made it. They saved the piece from becoming repetitive, and, odd transitions aside, their emotive facial expressions made the play extremely human.

One minute, Roland is yelling and hits Oliver and the next he is sitting on the sofa comforting him. The two work very well together in maintaining movement in the otherwise dull stage set, partly thanks to clever casting of actors so unalike in height and appearance. The production goes some way to answering the questions about the purpose and meaning of life the play raises as the emotional intensity of the scenes, and the essentially unadorned stage, work well to urge the audience to focus on the individual moments as opposed to Oliver’s infinite-future-infinite-past musings.

Oliver’s ideas relate to the entire universe, our entire existence and we are gently urged to think about them in the context of our own lives. But the piece seems to focus more clearly on asking whether these ideas comfort us, or whether this is a misguided expectation given human emotions are so illogical. If we’re cheated on, we might want to be angry, and someone telling us that ‘there’s no linear explanation’ for their behaviour is hardly seems like a good (let alone relevant) excuse. We might not want to be told that past, present and future are only concepts when we’re thinking about the fact our loved one only has so many weeks to live. It’s our sudden inability to comprehend what’s happening and to find the right words in the most crucial moments in our lives (those individual moments above) that frustrate us the most. During Oliver’s conceptual tangents, however, Roland has a get-out clause on the tip of his tongue.

‘Constellations’ is running from 17th – 18th June at 8pm in The Ogden Centre for Fundamental Physics, Durham University Science Site.

(Image by courtesy of Letterbox Productions)