Shauna Lewis and Becky Percival in Drama on 19 February, 2018. 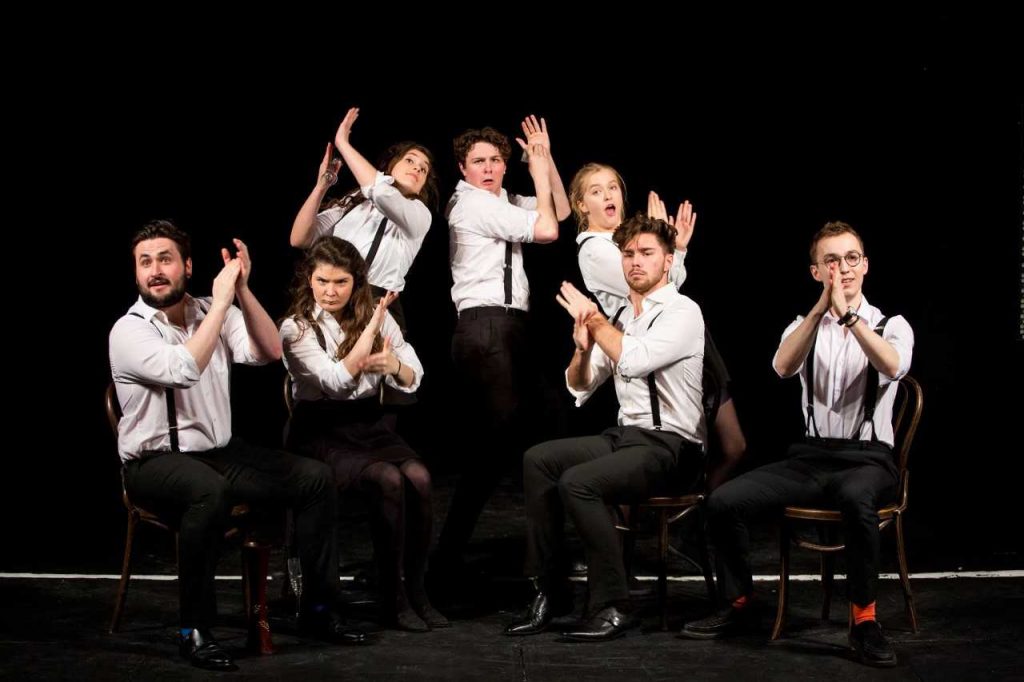 “Oxford might be the best university in the world, and it’s also certainly the most serious!”

‘Comedyfest’ offered the best of The Oxford Revue, The Cambridge Footlights and The Durham Revue, in a sketch show filled with strong pieces and good humour, along with those which didn’t quite hit the mark.

Starting off with stand-up was a bold move on the Oxford Revue’s behalf, and though commendable, it wasn’t necessarily what the audience were expecting and had limited success. Participation of the comedian’s parents began by being quite sweet, but as it became apparent that her whole stand up relied on the same ‘coat’ joke, it didn’t seem to go anywhere. As Oxford moved through their sketches, there were elements that piqued attention and began by being quite funny, but that gradually were overworked; others simply fell flat.

The ‘Agatha Christie’ sketch worked well initially, but the joke grew old as the Revue laboured the same joke again and again, meaning that by the end it lost its comedic effect. The David Attenborough sketch was similar in this sense, though more successful, but again The Oxford Revue seemed to take it too far until it wore thin and the audience were left slightly uncomfortable as the crescendo of explicit language stopped being funny and instead became awkward.

The main sketch, which took up far too much of their time, was on the subject of meta-theatre. Whilst smart, and the actors Bill and Adam were clearly comedically talented, the sketch tried too hard to be self-aware, and resulted in being pretentious. This was not helped by the overlaboured point that ‘as Durham students, not Oxford students, you may not get this’, something that once again began funny, then became tired. Perhaps I did miss the point they explained so extensively, but if you have to explain a sketch, and then have a sketch explaining that sketch, then maybe it isn’t funny in the first place…

Thus, although the stand-up and sketches were quite amusing overall, and it is important to remember they were not playing to a home audience, the Oxford Revue were slightly disappointing, even if their members were talented and some of the material had potential.

The Cambridge Footlights had an interesting concept for their set, centred on mime and clowning, though it could have done with a few more weeks of practice. It was for the most part engaging, but comic timing was sometimes forced and at times, actors were clearly still concentrating on developing their performance. Saying this, it proved a slick show, even if the quality wasn’t always there. The use of the different media platforms was utilised effectively, the transitions were professional, employing a ‘theme-tune’ idea, and gave them an edge that the other two troupes didn’t have.

In particular, the ‘Bear Grylls’ sketch stood out as the first of the night to be particularly funny, maybe because the increasingly stupid pensive thoughts became increasingly relatable. The ‘Speechless’ sketches had some high points; the skit based around the operating table became funnier as it progressed, as did the piece depicting its members as Pom-bears.

Although the Cambridge Footlights had some notable highs, there were other sketches that really fell. The bizarre skit that took a member of the audience as David Tenant to interview silently wasn’t so much funny, as it was strange. Unlike other sketches by both Oxford and Cambridge where the potential was present, even if it wasn’t executed to its maximum potential, this skit was just uncomfortable. As the audience grappled to understand the humour, it was thankfully relieved by a ‘breaking news’ skit, only to be returned to later. Laughs produced were confused, triggered by expressions and gesticulations provided by the troupe members. I was confused as to why it had been selected as one of the longer skits.

The final full sketch surrounding ‘The Hungry Caterpillar’ simply did not work. The premise of mocking GCSE drama, an objectively amusing and relatable concept, was ruined by a confusingly abstract, not even awful, rendition of a mimed ‘Hungry Caterpillar’. Once again, the audience were left confused, as it seemed more a light show than a comedic sketch and resulted in a severe dip towards the end of their set.

If all of it is to be taken into consideration though, the Cambridge Footlights put in a really strong performance which had some innovative concepts and funny material in their sketches. It did very much appear to be an experimentation on behalf of the Footlights though, which though understandable, seemed a bit cheeky as a lot of students had paid a lot of money to be there and were seeking a very funny evening.

Sticking to the traditional sketch format, The Durham Revue put out some great skits. All received a warm reception, partially down to a home crowd, but also down to material.

Although the Durham Revue took a little while to get into it, they did so with gusto and enthusiasm. In particular, the pieces surrounding the “hoarder” of museum pieces was the first to work for the audience; it was clever in its conception of misinterpretation. Falling into this bracket also, the sketch surrounding the figurines worked, playing off the audiences’ knowledge of the actors on stage. Although it may not have succeeded anywhere else but Durham, it was effective here and allowed the audience to engage more with the actors on stage. Similarly, the wedding-planning sketch was also a crowd-pleaser, although it was perhaps an easy laugh, by placing a male in the position of a bridesmaid, it was one of the more consistent sketches of the night.

The ‘Patricia and the Wolf’ sketch was a standout. Fantastically received, a clear display of two talented, and experienced, members of the Revue absolutely brought the house down with their abstract, intelligent comedy. An exercise in comic timing and a demonstration of the sheer quality of our home troupe, I was proud to be a member of Durham University. It was fabulously executed.

Despite largely good sketches, there were some that didn’t land as well. In some instances, it was the knowledge of the actor alone that made the sketch funny. Pieces such as ‘Guess-Who’, although they seemed to be satirising off a student stereotype, and therefore had potential, fell slightly flat and again became one of the sketches that was repetitive and overdone.

It became increasingly evident that the freshers were typecast as the typical ‘straight’ roles, meaning it was difficult to decipher whether they were as comically gifted as the others and it will be nice to see their development in the future and how they evolve. Newcomers Hamish and Rosie seemed more confident on stage, though this could be down to their greater experience.

Altogether amusing, ‘Comedyfest’ allowed for consistent entertainment throughout where the troupes experimented with their sketches. Although not side-splitting, it made for an entertaining evening.