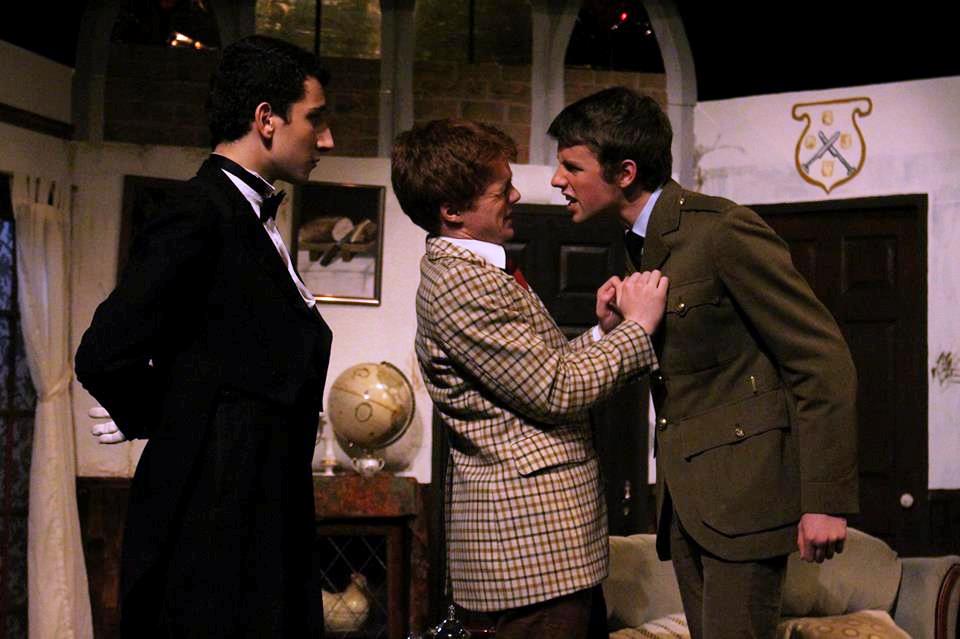 I entered the Assembly Rooms on Friday night largely as a blank slate. Having read a brief synopsis but little else, my expectations were somewhat vague and unsure – however, what I actually saw completely blew all expectations out of the water.

After taking my seat, my attention was immediately drawn to the set – and how impressive it was. Notably, it was remarkably professional and, I believe, well reflected the character of Bill Towcester – the signs of past affluence were all there but had been gambled away, leaving his Towcester Abbey estate looking as decrepit as his bank balance. It was, all-in-all, excellently designed and worked flawlessly – with the exception of the comical curtain mishap during the break between Act Two and Three which simply nicely added to the humour of the play itself.

However, I’m getting ahead of myself – we must start at the beginning.

As the stage went black and the curtains were drawn, there began Guy Bolton and P. G. Wodehouse’s work of comic genius that is Come On, Jeeves. Bill Towcester is in trouble. His moonlighting as a racecourse bookie has left him indebted to a colonial big-game hunter, and he faces pressure to sell his run-down estate to a wealthy clairvoyant. Come On, Jeeves follows the story of the heroic, yet understated, butler Jeeves and his bid to save the day for Lord Towcester.

The production opened with Rory and Monica Carmoyle, played by Andrew Shires and Charlotte Warmington, examining what is left of Towcester Abbey with some distaste. These introductory scenes were somewhat slow but this was nothing of concern, especially once the jokes started flowing – which they very soon did.

Throughout this play I found myself experiencing every emotion in the book, but predominantly I found myself laughing – sometimes long after the jokes were over. On that note, I must mention the unforgettable, downright hilarious performance from Andrew Shires (Rory Carmoyle) whose face alone – in the best way possible – could draw a laugh. Not to mention the not-so-subtle provocative jokes and his occasional exclamation of “what!” which, I believe, took the entirety of the audience off guard and surprised us with just how funny it was. However, this all could have easily fallen flat if played by someone with less charisma than Andrew – he by far received the loudest round of applause come the finale, which is a well-deserved testament to Shires.

While Shires’s performance often stole the show, all of the cast deserve a whopping pat on the back. For example, with Ellen the maid (Helen Fitzmaurice), whose appearances were brief but extremely memorable, it was almost easy to forget she was not a main character, especially considering that the laughs she drew were comparable to some of the main cast. Her character was a wonderful addition to the play and, despite being a minor character, Fitzmaurice made sure she was not to be overlooked. In contrast, the bold and booming Captain Biggar (John Halstead) was a surprisingly diverse character. While making his entrance as an intimidating, fearsome debt collector, Halstead perfectly captured the Captain’s softer side and his love of “yogah” which was unexpected but was so brilliantly, and strangely, right.

Speaking of Captain Biggar brings me very nicely onto the fantastically feisty performance by Savy Des-Etages (Mrs Spottsworth) as “The American” in a production dominated by Brits with stiff upper lips. While bordering on hysteria on several instances – namely while employing her clairvoyant capacities – Des-Etages managed to ensure that this flamboyancy was not unbelievable, just stereotypical – think Americans in Downton Abbey. Her portrayal of Mrs Spottsworth’s eccentricities brought with it some hearty laughs and, as the production drew to a close, what the play had been largely missing – a budding love story. I’ll let you work that one out for yourself…

With our hearts softened at the prospect of love, you can only imagine the response when the adorable Fizz Thomas (Pomona the dog) was carried on stage – cue the resounding “aww’s” from the entire audience – I heard you, men – and you’ve got it pretty much spot on. This canine’s cameo definitely engaged the audience and was an unexpected highlight. The production team (while doing much, much more than this too!) must be commended for carrying this off without a single mishap.

Also to be commended is Hamish Inglis, who played the almost hilariously incapable Bill Towcester, the 9th Earl of Towcester. I must note that his lines were, to begin with, somewhat rushed and there may have been some jokes lost to the audience as a result but after easing into the performance this quickly became history. By the end, Inglis’s performance perfectly encapsulated the essence of Towcester’s failed attempt at aristocracy – particularly, the nervous jokes and laughter, mostly directed towards the audience, were very well delivered.

And of course, no review of Come On, Jeeves would be complete without mention of the titular character Jeeves, played by Jake Goldman. Whilst butlers are, traditionally, simply background characters, Wodehouse and Bolton’s Jeeves is much, much more than that. He is the somewhat questionable moral compass, the (much needed) calming influence on the bumbling Lord Bill Towcester and ultimately his partner in crime, dropping occasional “suggestions” to other cast members to help with their cause. Goldman’s consistently articulate, humorous and refined performance was excellent and I can’t imagine anybody else taking up that role.

My favourite part of the show was, as I suppose it may have been for many others, the immaculately executed final few seconds of Act Two, where Jeeves and Bill carried out their dasterdly plan with Captain Biggar to pay off his debts. I certainly did not expect to see two of the lead male characters in dresses, but there it was! It was excellent comedy brilliantly delivered by all three on stage and the lighting and background effects ensured that we fully appreciated the climax – Jeeves the butler dressed as Lady Agatha, the resident ghost of Towcester Abbey.

If you’re looking for some light-hearted, silly and unapologetically British entertainment that is a change from sitting in front of the TV then Come On, Jeeves is for you. It was very refreshing to see comedy so well performed by students and I left the venue feeling lighter, happier and remarkably able to forget about the woes of third year. Now if that’s not what theatre is about, then I don’t know what is.

If you get the chance, I urge you to give Come On, Jeeves a go – you won’t regret it.