Review: Bring It On, The Musical 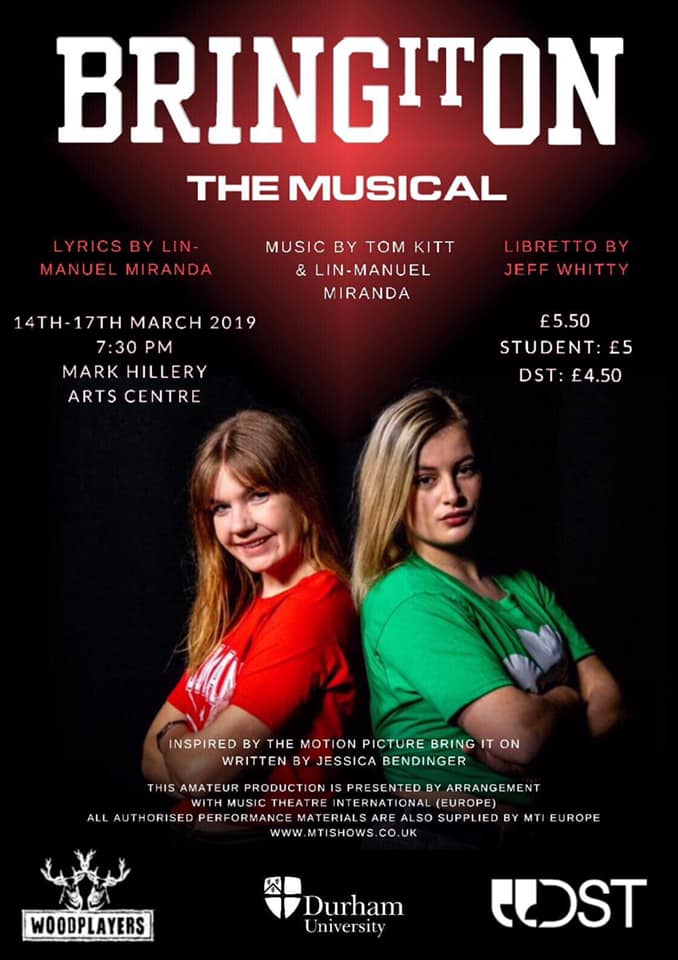 To my great shame, I’ve never seen the movie Bring It On, so I came into this musical with no expectations. The Director’s Notes from Molly Taylor and Aaron Thompson call Collingwood Woodplayer’s show “utterly ridiculous”, but they emphasise that it’s a feel good musical. And it is. It’s cheesier than a mozzarella stick, but its Disney Channel sense of fun, cast of colourful characters and slick one-liners manage to compensate for the generic plot.

In short, the story follows high school cheer captain Campbell (Ashleigh Boyce) who finds her dreams of leading a team to win the nationals scuppered when she gets transferred to Jackson, a less affluent school with a metal detector at the door and, more importantly, no cheer team. Boyce is an impressively strong singer, although at times her performance lacks confidence. Campbell, despite being the protagonist, is certainly more generic than the rest of the cast, but this doesn’t mean she can’t have her own sass and bite and a few potentially funny punchlines get lost.

Lin-Manuel Miranda’s score isn’t show-stoppingly memorable, but it’s still toe-tappingly upbeat, although it doesn’t quite reach its stride until we arrive at Jackson a good few scenes in. What really shines in this show is the supporting cast, and the conviction with which they each bring their characters to life. Amie Page is an early standout as Skylar, vapid, vain and obviously loving every moment of being onstage as much as the audience love her pitch-perfect comic delivery; Tamzin Kerslake’s Ava starts as an overlooked character before coming into her own and absolutely nailing a sickly sweet mean girl persona which you just can’t help but love watching; Becky Brookes’ Bridget is awkward and loveable, making you genuinely care for the subplot of her devloping self-esteem. And then there’s Louise Lovatt as Danielle, the show’s deuteragonist, in a convincingly constructed performance of being tough yet sympathetic.

It’s difficult to pick out every strong performer, and the infectious enthusiasm they bring to both their characters and the choreography (courtesy of Molly Taylor, Ellie Shearwood and Georgia Webb) means you can’t help but smile. There are a few moments that jar, however. A few lines in the script – references to ‘my people’ and ‘white girl’, as well as the overall focus on the Jackson students as hip-hop fans – means there is an element of the show which is lost with an all-white cast. If anything, this is an indictment of Durham University’s general lack of diversity rather than anyone involved in this show, although some script editing might have been helpful since these lines awkwardly stick out.

Similarly, there are a few momentary technical hiccups: microphones not coming up or being silenced in time, a split-second projection that isn’t meant to be there. None of it ruins the overall experience, however, and these are just first night teething problems which can easily be sorted.

Bring It On isn’t grand or deep, but you’d be hard pressed to find a single audience member who doesn’t enjoy watching it, and fun is its primary aim. Especially as the shadows of summatives loom over us all, it’s an unquestionable success in this respect.

Bring It On, The Musical is on at 7.30pm, 15th- 17th March in the Mark Hillery Arts Centre, Collingwood College.