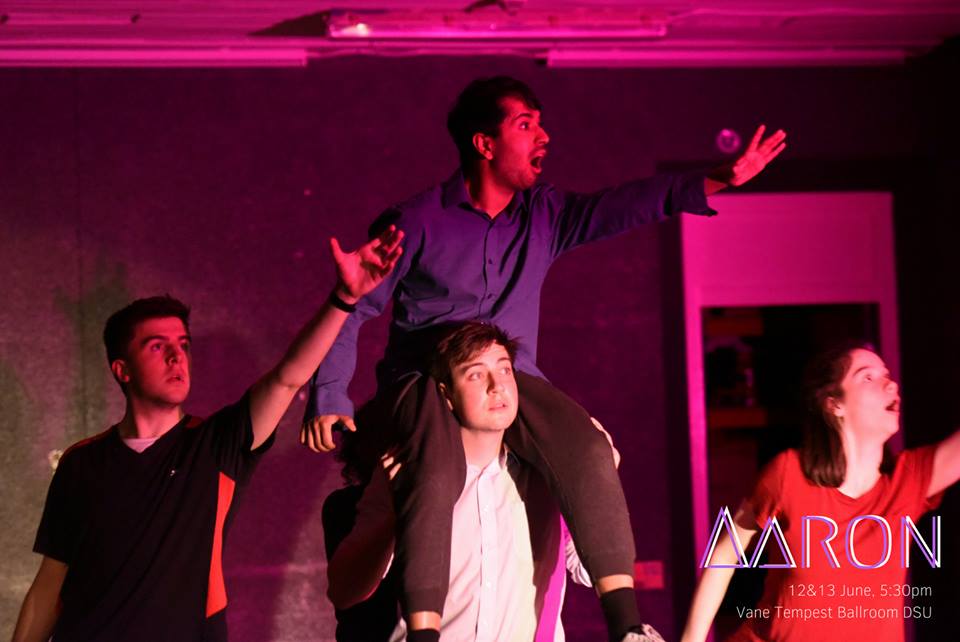 Wrong Tree Theatre’s Aaron carefully and convincingly explores the personal and familial ramifications surrounding disabilities as well as enlightening some of the key societal and social debates. Telling the story of a teenage boy who suffers from Prader-Willi Syndrome (PWS), a rare genetic disorder which causes insatiable hunger and a never-ending obsession with food, it is an incredibly moving and gripping piece of theatre.

Mo Hafeez’s portrayal of protagonist Aaron is a fantastic feat of acting and he gives an entirely convincing and relatable performance. It is immediately apparent that a huge amount of thought and research has gone into the character as he adopts all the habits and mannerisms of a sufferer of PWS. Speaking to members of the audience after the performance everyone seemed in agreement that his performance was virtually faultless. He seamlessly combines periods of childish, immature behaviour with moments of intense and terrifying anger. It is worth going to watch this piece of theatre simply for his performance alone.

The family dynamics are established and sustained throughout the play. By re-enacting scenes which would typically be considered easy, like eating meals and washing up, Aaron gives an insight into the difficult and omnipresent effects of an individual’s disability on the entire household. It is particularly poignant to watch mother Anne, played by Catherine Wright, pulled in all directions and overwhelmed by the mammoth task of caring for her disabled son and brother Jacob, played by Max Greenhalgh, constantly providing support and kind words to Aaron. Nevertheless, despite the incredibly sad nature of the subject matter, there are still elements of comedy, largely provided by sibling Phoebe (Isabel McGrady). These provide some light relief and also show that despite the devastating effects of PWS, families still manage to find some light even in more difficult times.

Alongside the familial effects, the play manages to enlighten some of the key social problems that exist in society today. Patrick Palmer’s portrayal of social worker Peter, for example, exposes the lack of knowledge and training concerning rare genetic disorders as he rushes to convince Aaron to live alone, a solution which often results in tragic consequences in sufferers of PWS. Catherine Wright’s performance as care worker Suzanne also deserves a special mention as she creates an entirely memorable character.

The physical theatre aspect really contributes to this play. Using stock physical theatre scenes throughout to underline the banality of day-to-day existence, Aaron transforms normality into something entirely original and fascinating. The scene at the supermarket is particularly brilliant and the effect could not have been achieved in any other way. Fans of naturalistic theatre should not be put off watching as the physical theatre elements are not overwhelming but are instead thoughtfully inserted when it is deemed that they will add something to the performance.

The sound and music also contribute to the intense atmosphere throughout the play.  Their effect is particularly evident in its final moments, which in my mind is the most moving scene I have watched at Durham, leaving most of the audience in tears.

Whilst the piece can, at times, be slightly confusing it is, in fact, this confusion which achieves the concluding and overriding aim of the play – so stick with it and I promise you will not be disappointed.

Director Florence Petrie manages the seemingly impossible task of tackling a sensitive topic head-on, yet delicately and thoughtfully. It is undoubtedly a fantastic piece of theatre and one which completely stands out. It is something one has never and probably will never see again, and I urge anyone to go and see it tonight for its final performance – you will not regret it.