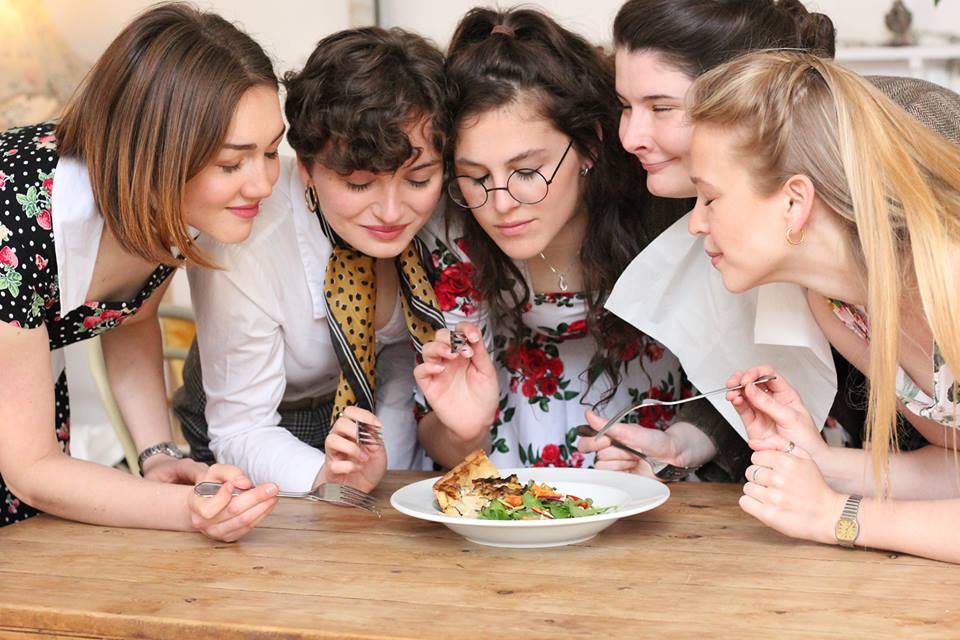 Following the enormous success of the first show, I was excited to see what many had hailed as ‘Durham’s best show this year’ on a bigger stage. Having closely followed their (it has to be said, professional standard) publicity, I was very excited. As soon as I entered the theatre, I knew I was in for a treat. Welcomed in by the ‘sisters of the Susan B Anthony Society’, each audience member was greeted in the classic 1950s clipped trill and handed a name badge; we were all honorary members for the night. All immediately immersed and slightly giggly, the audience took their seats. It was about to begin.

The set was relatively minimalistic, but it was enough; it worked and it didn’t distract from the main event: the ‘sisters’ themselves. Similar to the set, the actors all managed to fill the larger space with absolute ease. I had been slightly concerned that a bigger stage would undo some of the audience/cast member intimacy that was more easily constructed in the Assembly Rooms, a significantly smaller space, but that just didn’t happen. The charm that filled the Assembly Rooms flourished. The actors, their comfort with each other, and the play, made for a wonderful hour. I was just sad that given it was so short, it was also only on for just the one night.

There was very little to criticise at all in this play. From technical hitches to a couple of audience members leaving (something everyone else simply couldn’t understand – I later deduced it must have been a trip to the toilet), all that could have thrown any less experienced cast, was handled with absolute ease and neatly made part of the show itself: a standard of professionalism that exceeded mere student theatre.  The actors all had fantastic comic timing and there was no particular weak link. Jazzy Price’s Lulie embodied the very notion of dignified 1950s lady, from her clothes to the way she held her face, it was truly impressive. Lily Edwards as Vern was a standout. From her facial expressions to her gesticulations and cheeky interjects, she had the audience in the palm of her hand.

And of course, you cannot go and see this play and not remember THAT scene – yes the erotic quiche eating scene, as performed by Ella Blaxill as Ginny. This is a scene that could have ended up being horribly awkward, as having to essentially having to imitate oral sex on a quiche is definitely not something easy to go about, let alone pull off as absolutely hilarious. Ella, however, absolutely threw herself into this scene and it went fabulously. The audience were in stitches and, supported by naughty little comments from fellow cast members, it was easily the most outrageous scene of the play.

I suppose the only thing was, there were times (and there were notably few occasions) when the fluidity was not perfect, and it was obvious and a little jarring. One of these occasions was during Dale’s (Mally Capstick’s) speech. It was impressively long, and difficult to deliver as it was simply more sincere than other quips throughout the play, but this made the repetitiveness of what was one of the less funny scenes, a little clumsy. I did put this down to the script, however, since Mally as Dale was brilliant otherwise – particularly in the dramatic moment where she is locked outside in the supposed nuclear wasteland. The slightly awkward moments, however, were recovered exceptionally quickly – and the fact it was so jarring was really only in relation to the rest of the play, that was so excellently executed that it made such moments noticeable at all.

It has to be said, the director this time around, Damson Young, along with her predecessor Lucy Knight should be commended. Their use of space, their nurturing of the impressive characterisation each actor brought to the stage, and their dedication to this show made it one of the best I’ve ever seen, not just in Durham, but ever.