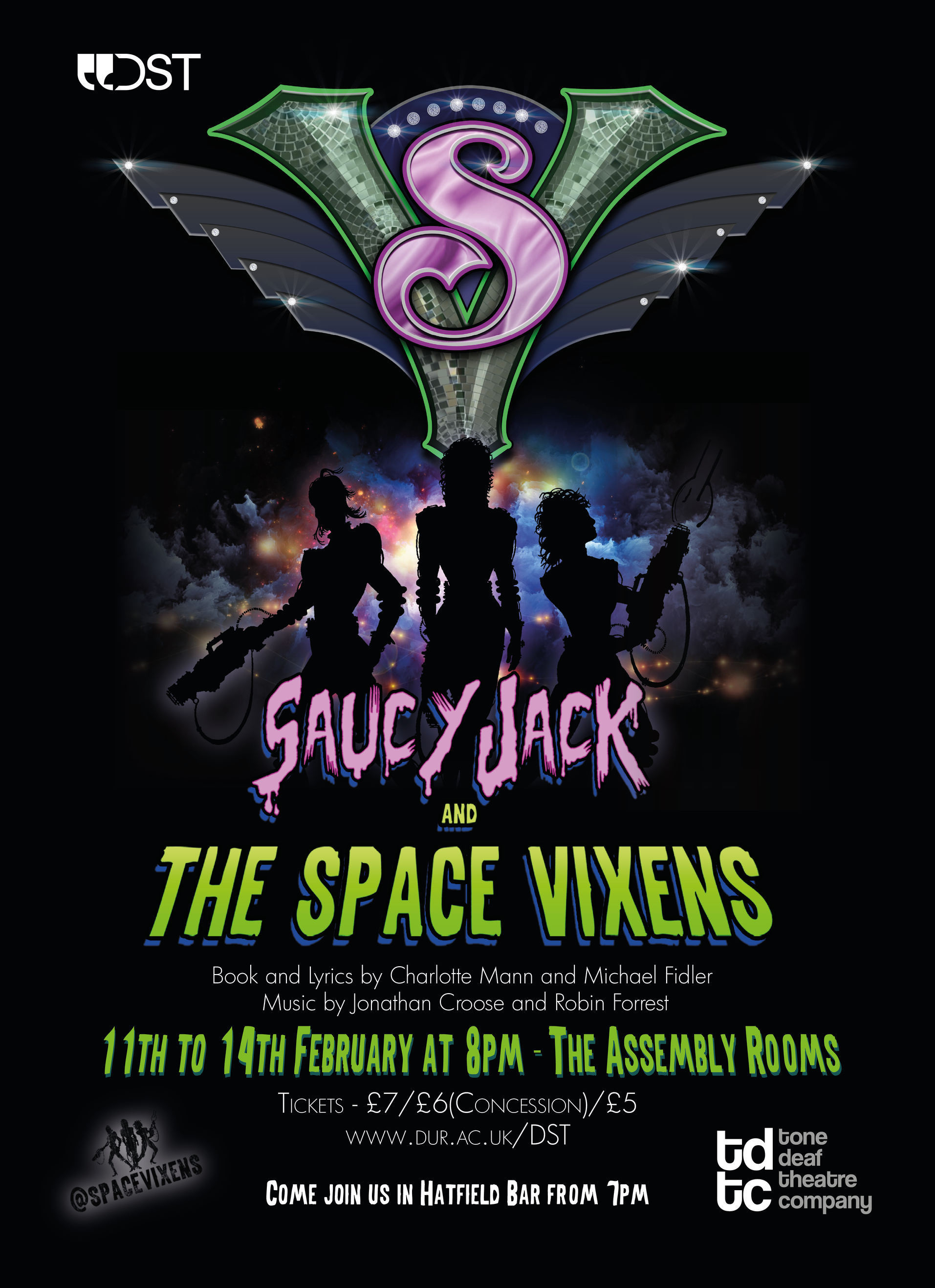 Hi Sam! With such an eye-catching title, I guess the first question is: what is it?

Saucy Jack and the Space Vixens is a fairly unique show to stage in Durham. Think Cabaret meets The Rocky Horror Show, and you’re halfway towards Saucy Jack. It’s raunchy, full of innuendo, and outrageously funny.

Where did it come from?

It was written in 1995 by Johanna Allitt, Simon Curtis, Mike Fidler and Charlotte Mann from the University of Kent, who wanted to stage a production at the Edinburgh Fringe festival. Leonard Bernstein’s Candide – the play they originally wanted to stage – was already going to be performed, so they decided to write their own play instead.

According to Mike Fidler, at the time they had in their possession a book entitled How to Write a Musical – ‘a good book, since out of print.’ He also claims ‘we were envisaging a musical rendition of Cheers set in outer space more than any attempt to pay homage to The Rocky Horror Show.’ They were in a unique position of selling a show before having written it, so he felt ‘we might as well create something that people were going to like.’ I think it’s safe to say they succeeded given that they played to sell-out audiences, and won the Fringe First Award for innovation in theatre and outstanding new production. Since that it has entertained audiences all over the world, with over fifty productions on three continents, including in Los Angeles, London, Seattle, Wellington, Oslo, Anchorage, Glasgow, Charleston, Amsterdam, Memphis, Brighton – and soon in Durham!

So, what’s it all about?

All is not quite as it should be at Saucy Jack’s, a seedy disco bar on the futuristic planet of Frottage III. Cabaret acts are being murdered one by one, found stabbed by the heel of a sequinned sling-back shoe: the calling card of the serial killer.

Inside Saucy Jack’s, waitress Booby Shevalle, saxophonist Sammy Sax, barman Mitch Maypole, and eccentric regular Dr. Wilhelm Von Whackoff discuss the murders. The only person who is unconcerned is Saucy Jack himself, who is unashamedly sleazy and enigmatic at the same time. Chesty Prospects, an outlaw, arrives from out of town, followed shortly by the infamous Space Vixens. The Space Vixens are an all female intergalactic police force, famed for their sass, independence, and thigh-high glitter boots. Together the cast uncover the dark and dirty secrets hidden in the depths of Saucy Jack’s bar.

What’s so great about it?

The play celebrates being whoever you want to be. It’s inclusive, featuring a multiplicity of relationships. It’s pretty much the ultimate disco, with numbers such as ‘All I Need is Disco’, ‘Glitter Boots Saved My Life’ and ‘Plastic, Leather and Love’ that will stay stuck in your head all night! It’s unashamedly glittery – but it works because it doesn’t take itself too seriously. It’s absurd, and makes sure the audience is aware of this; we’re aiming to make you laugh. From the characters’ names to the innuendo-laden script, we are here to entertain!

The ideal location to stage Saucy Jack is in a bar, but since the Assembly Rooms does not have a license, this is hard to recreate. However, we are building up the stage, so it won’t be the theatre as you know it. We would also like to invite everyone to join us in Hatfield bar, before the performance and during the interval, to get the full experience of the show!

Saucy Jack and the Space Vixens will be playing at the Assembly Rooms, 11–14th February. Tickets are available via the DST website: http://community.dur.ac.uk/dst/show.php?show=1196