In conversation with: ‘5 Lesbians Eating a Quiche’ 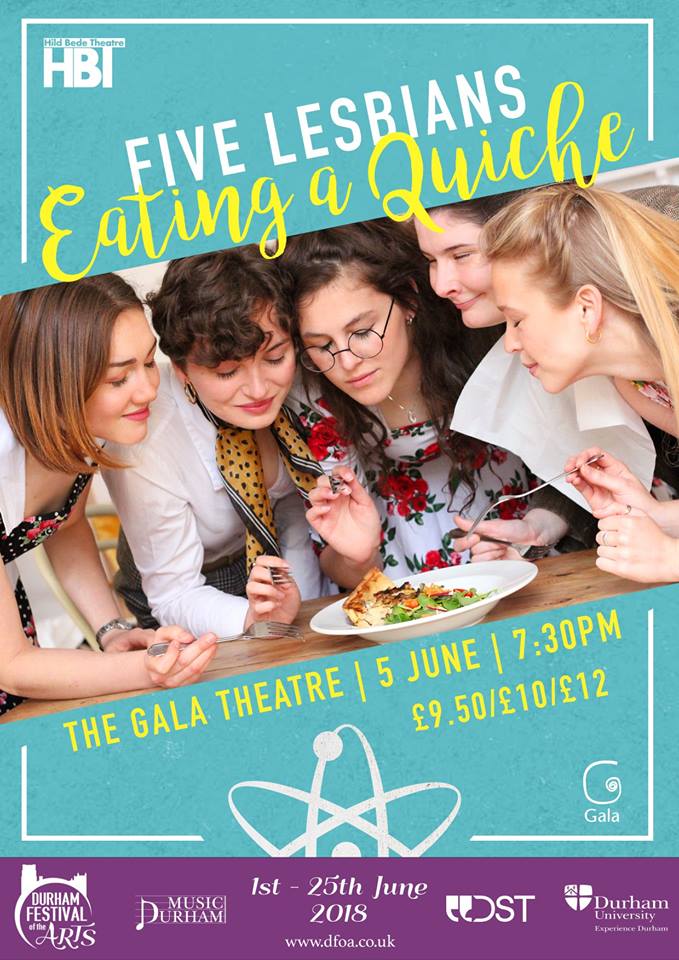 “To me, the play is ultimately a celebration – of homosexuality, of womanhood and, of course, of quiche.”

Director Damson Young gives us the insight on making ‘5 Lesbians Eating a Quiche’ even better and even more quiche(y) than before.

For those who haven’t seen the show, set the premise:

To the surprise of many, ‘5 Lesbians Eating a Quiche’ is not a mere click-bait title; it does exactly what it says on the tin. The show is set in 1956, at the annual ‘quiche breakfast’ of the Susan B. Anthony Society for the Sisters of Gertrude Stein – a society in which the audience are active participants. Whilst the meeting starts like any other, the looming threat of a Communist invasion and the disclosure of a few secrets proves to cause carnage – though fret not, I can safely guarantee both lesbians and baked goods.

Have you approached the show differently from its previous format, or have you maintained the spirit of the original by trying to keep it as similar as possible?

Michaelmas Term director Lucy Knight did a fantastic job, and so for the most part I’ve tried to keep the play in line with her original vision. Whilst as an ensemble the five lesbians (Ginny, Lulie, Dale, Wren and Vern) are a tightly knit group, I’ve maintained the idea of leeway for improvisation, an element of the play which I think is key to the success of its comedy. Over the last few weeks, we’ve also done some more focused character work and tried to slicken up those elements which were perhaps a little rougher round the edges. Whilst this year’s show promises a couple more gags and perhaps smoother running, I thought it was really important to stay true to its roots.

How have you adapted it to suit the gala?

The Gala is, of course, a massive space and so adaptation-wise our efforts have been geared towards making it bigger and better, both in terms of set and the play itself. I would say that we’ve up-scaled in both regards. The space available has enabled us to come up with a more detailed staging vision which I’m sure will pay off, and has ensured that all of the characterisation has been somewhat magnified. The Gala also offers unmissable opportunities for audience interaction, an element of the show that I’m really looking forward to.

Why should people that have seen it before come and see it again?

Given the room for improvisation, the show is essentially different every time, and the fact that I’ve watched the show countless times since October and am still not bored of it is testament to this. Part of the show’s charm is in its unpredictability – whether it features the prize quiche toppling off the table or some unexpected ad-libbing, it’s guaranteed to entertain and to offer a different experience each time it is performed.

In what ways do you think the show is important to people? What do you want the audience to take away from the show?

‘Five Lesbians Eating a Quiche’ is, of course, gloriously silly and makes for very light-hearted, feel-good viewing. However, I think it actually offers something really quite special. The all-female cast are absolutely fearless in their silliness, and the bonds between the ‘sisterhood’ are really tangible, even amidst the more farcical parts of the show. As many of the cast and crew are members of the LGBT+ community, we’re also immensely proud to put on such an exuberant display of lesbianism. To me, the play is ultimately a celebration – of homosexuality, of womanhood and, of course, of quiche. What more could you want?

‘5 Lesbians Eating a Quiche’ is on for one night only at 19.30, Tuesday 5th of May at the Gala Theatre.
Tickets are being sold here and follow the Hild Bede Theatre Facebook page for updates.