With a total of 70 students involved in this year’s production, Dulog presented an incredibly impressive musical produced by Jennifer Leigh where every element— choreography, singing, music, acting, sets— was equally remarkable.

The perhaps most colourful couple of the show was Nathan Detroit, the resourceful gambler desperately trying to find a place for his craps game, and Miss Adelaide, his fiancé of 14 years desperately trying to get married, respectively played by Olly Stanton and Flo Lunnon’s understudy Bella Jessop. Not only did they have a great chemistry as a duo, but they were also individually amazing. Stanton’s presence onstage in particular was outstanding as he captivated the audience with his expressive faces and his incessant pacing and running around. Bella Jessop was absolutely hysterical as Adelaide with her sometimes husky sometimes squeaky voice and her performances displayed a great mastery of, well, everything. She also lived up to the high standards set my Emily Phillips who had performed ‘Adelaide’s Lament’ in the TDTC Freshers’ showcase— which inevitably makes one wonder what it would be like if they were ever to perform together.

As for the Hot Box numbers, characterising them as fantastic wouldn’t do them justice, they were utterly perfect. Jessop’s powerful voice kept changing while she was simultaneously dancing and acting, but she somehow made it look effortless. However, there was more to the Hot Box numbers than Adelaide, and the dancers surrounding her, like the whole dance ensemble, were close to stealing the show with their joyful and perfectly executed choreography. One could argue they did during the Havana number which truly put them in the spotlight. Hats off to Anna Kendall whose choreographies were one of the highlights of the show.

Overall, I think what I found surprising is how comedy was easy to achieve for both Stanton and Jessop. They had everything right : timing, precision, physicality. Moreover, Adelaide was so relatable that she almost had us shed a tear when she realised she couldn’t change her guy.

Yet, the talent of the cast did not stop there. Mirroring the passionate Nathan and Adelaide was another couple, Sky Masterson and Sarah Brown, respectively Tom Cain and Lucie Fletcher. The pious missionary’s first appearance wasn’t as striking as Tom Cain’s charming smooth-talker, but her first song had the audience in awe with her cristal clear voice reaching without any difficulty high notes. While Cain and Fletcher were great on their own, they lacked a little chemistry during the part in Havana where Fletcher’s tipsy character— to say the least— outshone a more static Sky Masterson. Cain made up for it with his charisma however, and they were both sweet and endearing.

The other members of the cast were every bit as good as the leads when it comes to acting. I was delighted to see The Revue’s Daisy Hargreaves as Big Jule whose theatricality paired well with Stanton’s. Em Oliver as Harry the Horse was hilarious and Alexander Bittar, from his initial performance in the opening trio proved to be very talented. Harry Allderidge, who had been a little eclipsed during the TDTC freshers’ showcase, gave us a sweet and moving rendition of ‘More I cannot wish you’. 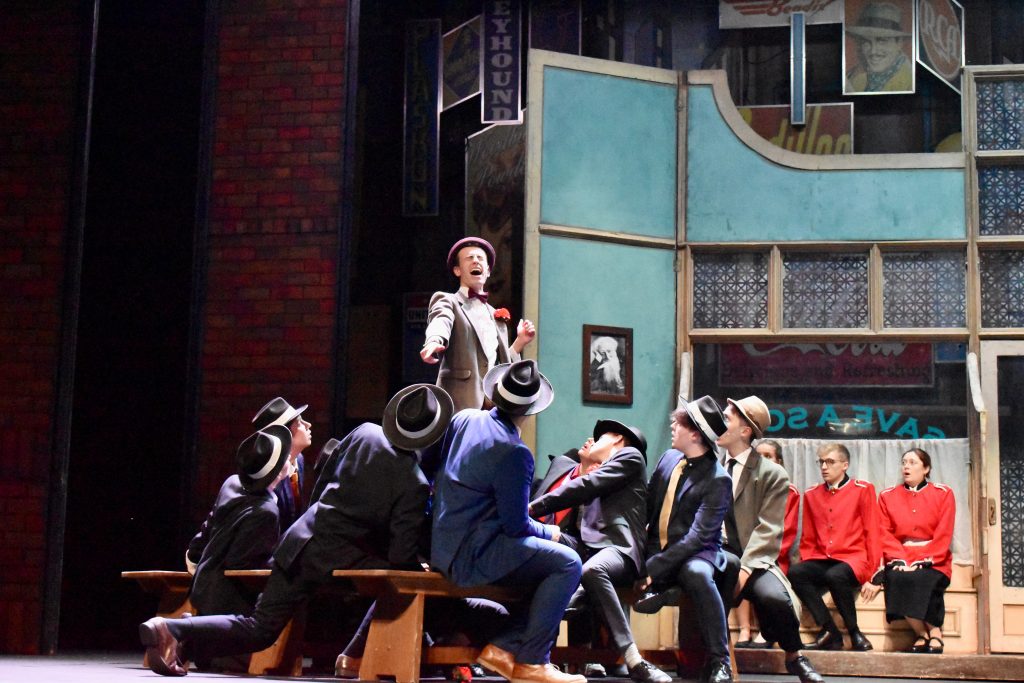 Sam Jones as Nicely performing  ‘Sit Down You’re Rocking the Boat’ surrounded by the other gamblers. Photo by Jennifer Leigh

But to me, the show-stopper for which congratulations are in order to the musical directors Tom Klafkowski and Ollie Fabb, was the classic ‘Sit Down You’re Rocking the Boat’ performed by Sam Jones as Nicely. The whole meeting at the mission with the gamblers might have been my favourite scene because of its comic value, but Jones’ number was truly breathtaking and deserved the round of applause it got.

I was also very impressed with the sets which allowed us to immerse ourselves in the story. This production of Guys and Dolls as a whole looked—and sounded— incredibly professional. In fact, it was exactly what I would expect a real Broadway show to be. Guy Rapacioli can be proud of what has to be the best production I have seen in Durham so far.