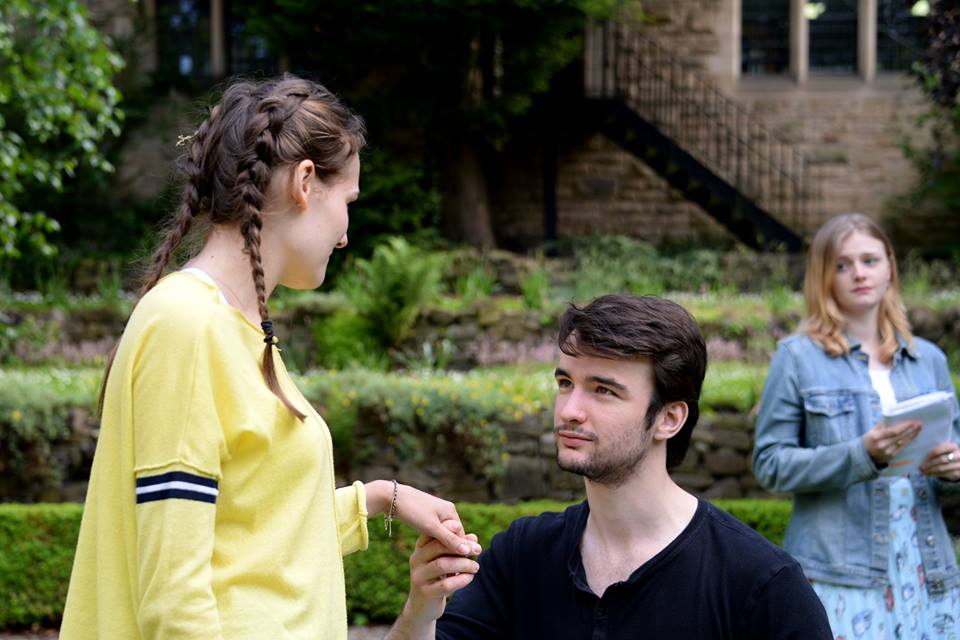 To be chosen as the director for Castle Theatre Company’s Summer Shakespeare Tour was an unbelievable honour – the tour has been running every summer since before I was born, and is now an iconic feature of Durham Student Theatre. I was also absolutely thrilled that the chosen play this year was Twelfth Night, as its gender-bending and musical mischief make it, in my opinion, one of Shakespeare’s most interesting comedies.

Since the play is being performed outside, and in multiple venues, we have had to think carefully about how to make the most of the resources we have in order to best bring the story to life. Our musicians have been a real blessing, led by musical director and composer Georgie Proctor, who has been able to create musical ‘themes’ in order to set the scene, in lieu of a naturalistic set. The music has certainly been one of the highlights of the rehearsal process for me – Georgie has done a fantastic job drilling all our cast members into becoming excellent musical performers, whether it is in their comfort zone or not!

I have chosen a ‘dapper’ theme for the costumes, as the bow-tie and braces fashion is one that has become popular not just for male-identifying individuals, but also for women and non-binary folk who wish to present androgynously. Therefore, it seemed the perfect stylistic choice for a play so preoccupied with the performativity and social implications of gender. I really wanted to bring out the nuances of presentations of gender and sexuality in the play. One of the ways I have attempted this, in addition to the costumes, is by casting a female actor in the role of Malvolio (in our production: Malvolia), inspired by the recent National Theatre production starring Tamsin Greig. This creates an additional instance of same-sex attraction in the play, further exploring the latent queerness of Twelfth Night.

However, as much as I have tried to create a certain level of nuance in this production, audience members can rest assured that they will not go without a decent helping of revelry and silliness if they bring their picnics down to Fellows Garden this weekend. Sock puppets, tiny swords, and yellow stockings all take to the stage with aplomb to give you the light-hearted folly you ordered for a (hopefully) gloriously sunny afternoon of post-exams fun.

Putting on a show in the short space of time after exams is an intense and sometimes stressful experience, and this production has not been without its moments of difficulty. Having said that, working with such an incredibly lovely and talented group of actors and musicians every day has reminded me why this process is absolutely worth it. Furthermore, my producer Emily McLean has been utterly wonderful, and working with her, alongside my aforementioned musical director Georgie Proctor, tour manager Theodore Holt-Bailey, and choreographer Millie Blair has led to an end result of which I hope we can all be proud. I know it comes from all of us when I implore you: please do ‘sneck up’ and come to Fellows Garden to join us in picnicking, iambic pentameter, and general merriment.

Twelfth Night is on at 2.30pm, Friday 15th June- Saturday 16th June in the Fellows Garden, with a 1.30 pm performance on Sunday 17th June at Ushaw College.