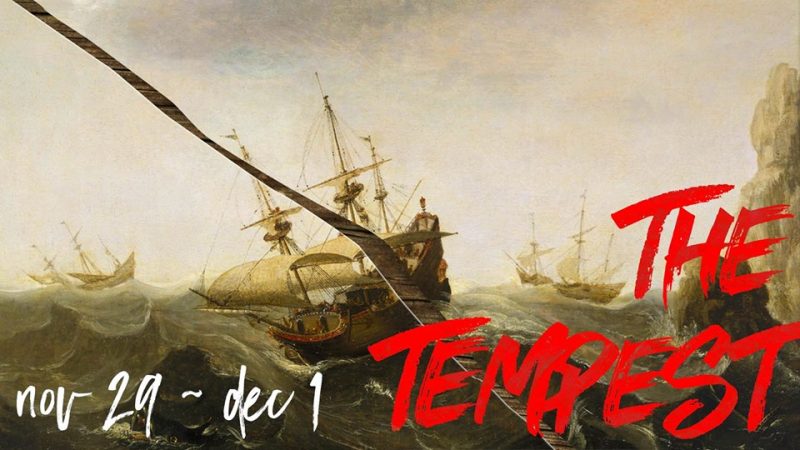 As mixed-raced students in Durham, we became increasingly aware of the lack of diversity within the university and throughout theatre presented in DST. With the continual racial tensions nationwide: the Exeter Uni scandal, the Durham fellow in blackface, the Muslim Durham students attacked last year and others of that ilk; we thought creating a piece of theatre which showcases our own and other cultures, would be fitting for the current social and political climate.

We were both very familiar with The Tempest and were perplexed by the fact that traditional productions tend towards displaying Prospero as a fatherly and benevolent leader. Even towards his daughter, Miranda, his anger and dictatorial temper is evident in the text, and this is only more dramatic when speaking to those he has enslaved.  The idea of a white man (or in this production, a woman) arriving at an island and appropriating the island as her own, is a distinctly colonial theme. Not to mention the Men of Naples who are stranded there and all of their grand plans to “become King on’t”.

With The Tempest we wanted emphasise these themes, and look at influences from non-western traditional theatre, bringing elements of our own and our casts cultures into the production. A lot of this ties in with Sightline’s aim to increase diversity in the Durham theatre scene and introduce foreign theatrical traditions. We also wanted to broach the somewhat sensitive topic of Britain’s inherently colonial past through theatre, for example we have directed the spirits to produce magic representative of colonial reliance on their host communities.

We also approached the production with sensitivity toward cultural appropriation, being aware that we were unlikely to cast one colonised race as the spirits we wanted, to avoid a specific country as the location. We didn’t want to dress non-Indians in sari’s, non-Malaysians in baju and so on. This also gave us the freedom to use a lot of different types of dance and physical theatre from many diverse cultures. We have created ‘Sprits’ whose physicality is informed by Malay folk dance, Indian Kathak dancing and Indonesian body percussion. We think this creates a temporal space where cultures can be appreciated and showcased.

Our key aim from this production was to stage how little we know of the diverse cultures across the world, despite boasting of having ‘conquered’ it for so many years. We want to expand Durham’s western outlook on theatre and on culture, to fit the varied traditions from around the world.

The Tempest is on at 7.30pm, 29th November- 1st December in the Hild Bede Chapel.