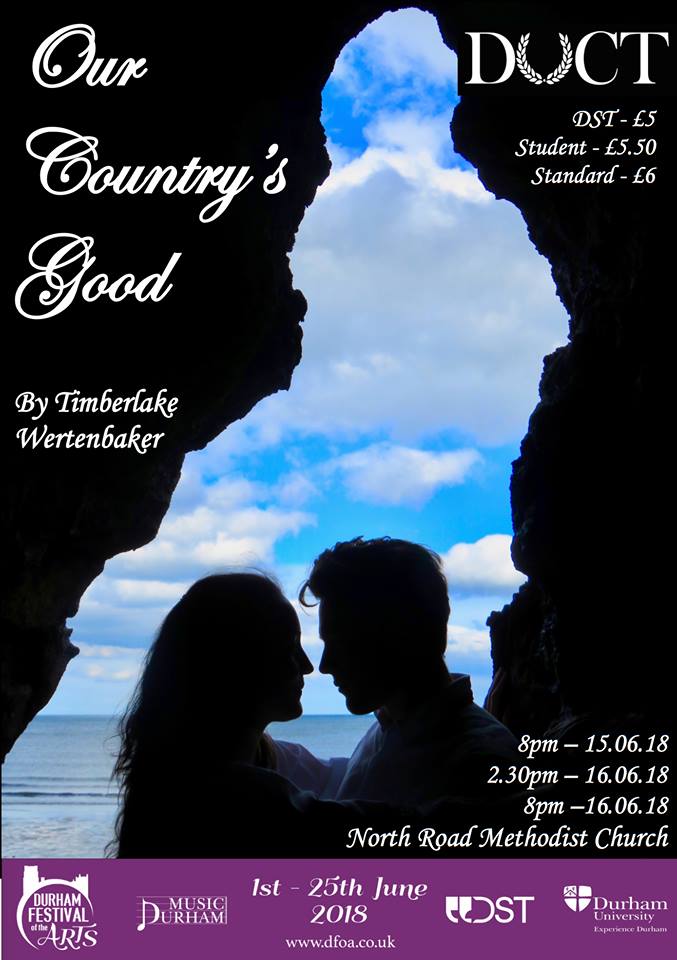 “…we’ve got floggings, theatrics, heartache, and of course, kangaroos. “

I’m the first to admit- pitching a play set in 1788 about putting on another play, in the Australian wilderness might initially sound a little dry. But with further study, I hope you’ll agree that Our Country’s Good is far from that- we’ve got floggings, theatrics, heartache, and of course, kangaroos.

One of the things which first caught my interest when I encountered the story was the difficulty of defining it with a fixed genre. The play is both heartbreakingly tragic in parts and hilariously funny in others. It is a love story, a coming-of-age drama, a record of historical events, an examination of the nature of captivity and the power of art, and so many more, all at once. Luckily, I have been privileged to work with a cast and crew who rose to the challenge of depicting the subtle and complex themes of the play with aplomb, and have all worked immensely hard to bring Timberlake Wertenbaker’s brilliant script to life.

I hope that despite (or perhaps because of) the darker elements of the play, you will be entertained by the performance. However, simply to view it as a light-hearted recreation of Australia’s convict history is to miss its complex meaning. The events of Our Country’s Good are based on the very real and often very dark history of British colonisation and the effects of transportation on officers, convicts and Aboriginal Australians alike.

My aim was never to shy away from the realities that the play dramatizes and, like real life, it is a mixed bag of light and shade, joy and sorrow, some happy endings and some not. Nearly all of the characters in the play are based on real people, their real lives and personalities, and my team and I have endeavoured to do justice to their stories.

The play also has an important message about the power of art. Written in the 1980s in a time when funding for the arts hung in the balance, I believe it is still as relevant today. Like the crew of The Recruiting Officer in 1788, we have found that producing a piece of theatre can be stressful at times, but ultimately worth it all for the joy that can be found in art, and in working with a company. We get involved with student theatre because we love it, and I hope that every member of the Our Country’s Good cast and crew has enjoyed the process as much as I have. The play ultimately proves that in whatever sense we are in prison, connecting with others, in this case through theatre, can set us free. It has been an honour to work with everyone, and a joy to make new friends and connect further with old ones. I hope that you, the audience, will share in the enjoyment of the theatre and, as Governor Phillip says, ‘laugh, be moved and perhaps think a little’. But enough from me- the last word, of course, must be the play itself.

Our Country’s Good is on at 8pm, Friday 15th-Saturday 16th of June at the North Road Methodist Church.