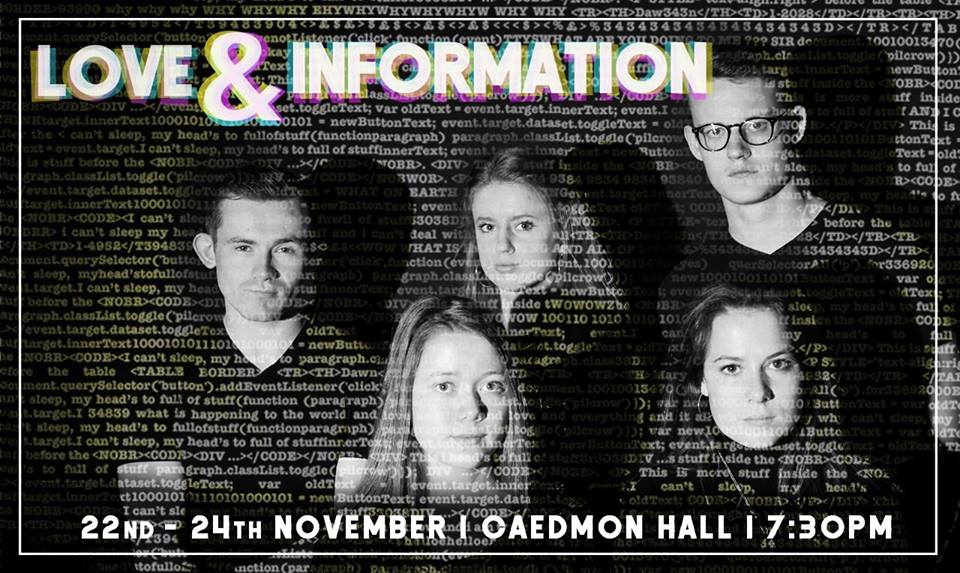 Love and Information is like nothing I’ve ever worked on before. Caryl Churchill hands over complete authority to the director, something I was so excited about (if a little daunted). The only rules Churchill lays down are that all the scenes display different characters and that the sections should be kept the same, as well as interspersed with a collection of single line scenes which she entitles ‘Depression’. Not much to go on!

Churchill is questioning form, and immediately undermines the conventions we have come to expect in a play. I wanted this deconstruction of the norms at the forefront of Hild Bede Theatre’s production, with an emphasis on process in order to point to the theme of communication. What happens in different relationships when communication breaks down, and how much does love depend upon, and interfere with, the information we receive? Throughout the play we present people gaining information, rejecting it, misunderstanding it and even forgetting it. The amazingly talented five-person cast work tirelessly to portray over one-hundred characters, and through these we look through a window into a multitude of individual lives, as connections are made and broken.

There is one central character to look out for, but she is far from a narrator. She is just as uninvolved as we are when trying to process the changing relationships that surround and crowd her, over which she feels she has no control. It is through this individual person, who is consistently present, yet feels so, so absent, that we touch on how mental illness can so deeply affect a person’s interactions and relationships. She feels isolated and overwhelmed by the vast world around her, and we follow her as she grapples with the weight of every single emotion she feels.

I cannot emphasise enough the importance of the process itself in making Love and Information come alive. Rehearsals have been an entirely collaborative. A typical page in Churchill’s script looks like a jumble of random words and phrases, almost like an abstract poem. This gave us complete freedom to the point where we had to decide how many people in each scene, which lines are said by who, and where in the world this scenario is taking place. The characters, therefore, guide the play completely, and each scene is tied completely to those within it. The actors are performing scenes which they have devised from start to finish – they have seen the cognitive processes behind every single word they speak and movement they make – allowing them to be fully immersed in the production as an expression of the whole team’s inputs. This is what makes this production so special and unique: it is a melting pot of all of our feelings and ideas, and this brings truth to the meeting pot of characters we are showing you.

I always knew I wanted to make the most of the technical capabilities of the super talented Freddy Sherwood and Meerav Shah, and I have had so much fun working with them and nodding along to technical jargon that really means nothing to me. I have been repeatedly amazed when I describe something wild and wacky I want to happen on stage, and every time the response is ‘Yep, we can do that.’

Audiences may leave Love and Information with more questions than when they came in, but (and it may sound clichéd) I want to make you think. I am very happy to challenge you with scenes that don’t make sense, or confuse you by putting seemingly unrelated themes into a mismatch of familiar and unfamiliar contexts. Love and Information does not occur in a vacuum, and so my intention, perhaps, is to make the audience question some of the values and assumptions they walked through the door with. This stretches as far as how they expect to view theatre: Love and Information demonstrates how a play is so much more than the finished performance. It is a process, a collaboration and tells the story of the creative process, the actors’ intentions as much as the characters’ within it.