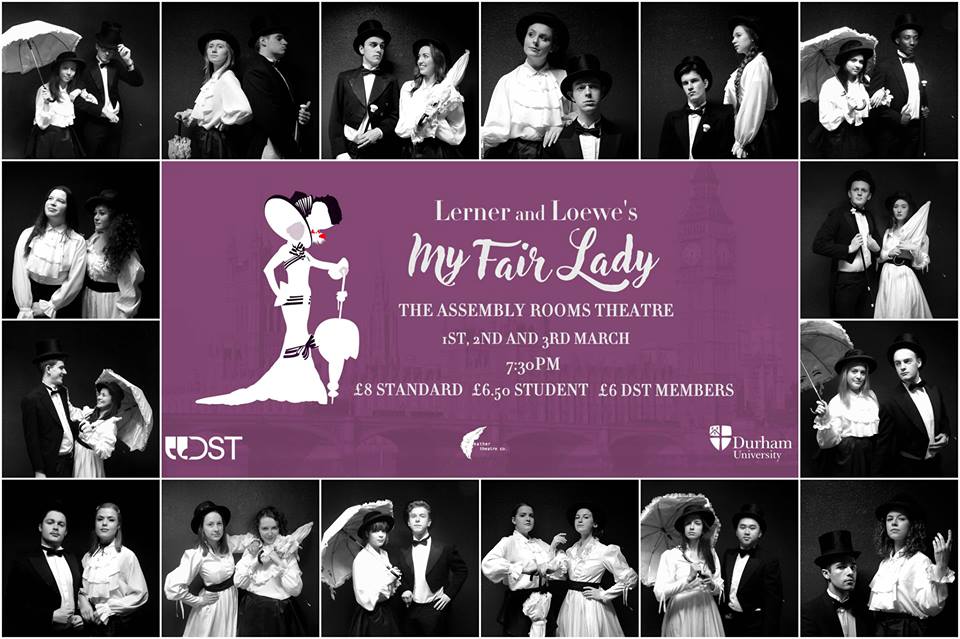 “One of our biggest priorities throughout rehearsals was to emphasise the humorous aspects of the script.”

‘My Fair Lady’ is a timeless classic, famed for its beautiful score, witty script and its Cinderella transformation of Eliza Doolittle from cockney flower girl to an upper-class lady. So when the opportunity to direct it came around, there was no way I could turn it down.

The first piece of the puzzle was finding an Eliza and a Professor Higgins, who could not only portray two of musical theatre’s most well-loved characters, but also bring something new to the roles.

Olivia and Nick have done an incredible job bringing these two extremely complex characters to life, subtly hinting at their growing friendship throughout the show. It’s no mean feat to play the romantic leads in a musical where the protagonists argue in practically every scene and don’t sing a single love duet together.

One of our biggest priorities throughout rehearsals was to emphasise the humorous aspects of the script. These could easily get lost under the weighty themes of class and patriarchal attitudes.

Rather than rely solely on the character of Alfred Doolittle and his drinking mates as the comic relief, as many versions do, we have tried to highlight Higgins’ dry sarcasm, Eliza’s feisty attitude and Freddy’s hopeless infatuation for Eliza.

Above all, the biggest highlight of this show is our amazing cast and crew. The entire rehearsal process has been very collaborative and is something of which we are all incredibly proud. One of my personal highlights of the show is the hilarious slapstick comedy routine that Angus, Alex and Jonny choreographed themselves to accompany their song ‘With a Little Bit of Luck’.

But perhaps the most obvious demonstration of our cast’s talent, dedication and enthusiasm are the multiple dance numbers (beautifully choreographed by Megan and Caitlin) featuring our 36-strong chorus. These routines, which involved teaching our entire cast how to waltz, have really helped bring a sense of life to some of the most iconic songs, from the bustle of the cockneys in Covent Garden market to the poised crowds of Ascot.

There is no way that this production would have been possible without the help of my extraordinary production team- Sam, Izzy, Hector, Laura, Rosie and Ariel as well as the support of Izzy, Luke and Feather Theatre Company. Hopefully, with a little bit of luck, you’ll enjoy watching the show as much as our cast and crew have enjoyed working on it!

‘My Fair Lady’ will be performed on 1st, 2nd and 3rd March in the Assembly Rooms Theatre. Doors open from 19:00 with performances starting at 19:30. Tickets can be purchased here.