DDF Review: Save the Date 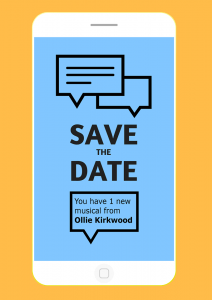 This fun and upbeat brand new musical follows the lives of singles all trying online dating! Who struggles to find what they’re looking for? Who can’t catch a first date? Who’s too scared to fall in love? (Plot summary taken from programme).

The above plot summary may sound somewhat familiar to anyone who has seen or read reviews of last term’s I Love You, You’re Perfect, Now Change, and this initial impression remains surprisingly accurate even after having seen the play in its entirety. It carries over much of the bare bones of this other musical, but sadly didn’t reach the same level of humour or inspiration. This, in and of itself, is not a criticism. Nothing’s original nowadays, reinterpretation is everywhere and it’s a good thing too. However, it’s difficult not to compare the two, and Save the Date definitely comes off weaker in most aspects.

Take the music itself, for instance. Many popular musicals draw on a distinct musical style: Hamilton draws heavily on hip-hop, Hairspray cribs much of its musicality from upbeat ‘60s pop, and, whether or not you personally enjoy these styles, it is undeniable that they play a large part in forming the identity of the musical as a whole. This is perhaps the largest area where this play suffers. I honestly can’t say anything more precise about the genre of Save The Date’s music than the rather unsatisfactory and generic label, musical.

It pains me to be harsh because there are many displays of evident talent throughout the performance. The band are excellent, and there is much to admire in the musical and acting talents of the cast as a whole. Particular standouts include shy, disillusioned romantic Connie, played by Aimee Dickinson, who weaved a surprising amount of pathos into her performance, and her entertaining foil Chlo, played by Rebecca Kingston, an a promiscuous and staunchly anti-romantic character who plays excellently off of Connie’s naïveté.

My theory as to why these characters were the most entertaining is that they are the closest representatives of recognisable types which are evident in the play. An ensemble piece such as this, if given a long-enough running time, can be incredibly successful and satisfying, creating a sense of connection between everyone in the audience and reminding us that navigating the difficult landscape of romantic interaction is baffling and messy for everyone. And this is why I Love You, You’re Perfect, Now Change works so well where this musical falls flat. The former has 4 people play many recognisable roles, infiltrating a variety of familiar romantic situations to create an amusing and energetic portrayal of relatable relationship anxieties. It is a simple trick, but a very effective one. Save the Date tries to develop characters and a continuity but, given 55 minutes, it is unsuccessful in developing many past their initial stages, and as such, much of the humour is blunted because it’s difficult to immediately remember most of the characters’ names, let alone their unique identities.

I’m worried it sounds as if I’ve been overly harsh in this review. I can’t say I regret going to see this play, but it’s hard to say anything at all without it bouncing off the thick layers of mediocrity the play has for armour. It doesn’t push any boundaries or try anything new. In fact, one thing carried over directly from the musical which shall not be named is the disappointingly unanimous heterosexuality of the characters. Playing it safe, however, is fine. The problem here is that Save the Date isn’t even particularly successful in being an entertaining popcorn musical for the masses, instead it’s so bland that identifying its target audience is impossible, other than maybe people fight tooth-and-nail to see anything which shows the slightest sign of being a musical. Don’t see this as a negative review. As the time-worn parental cliché goes: I’m not angry, I’m just disappointed. The tragedy of this musical is that with the talent on display, the glimpses of potential greatness, it could have been something truly special, but as it stands, my review can be summed up in the following four bland words: It is a musical.

Ollie Kirkwood’s ‘Save the Date’ for Durham Drama Festival is on Wednesday 6th February at 2:30pm, Thursday 7th and Saturday 9th February at 8pm in the Mark Hillery Arts Centre.