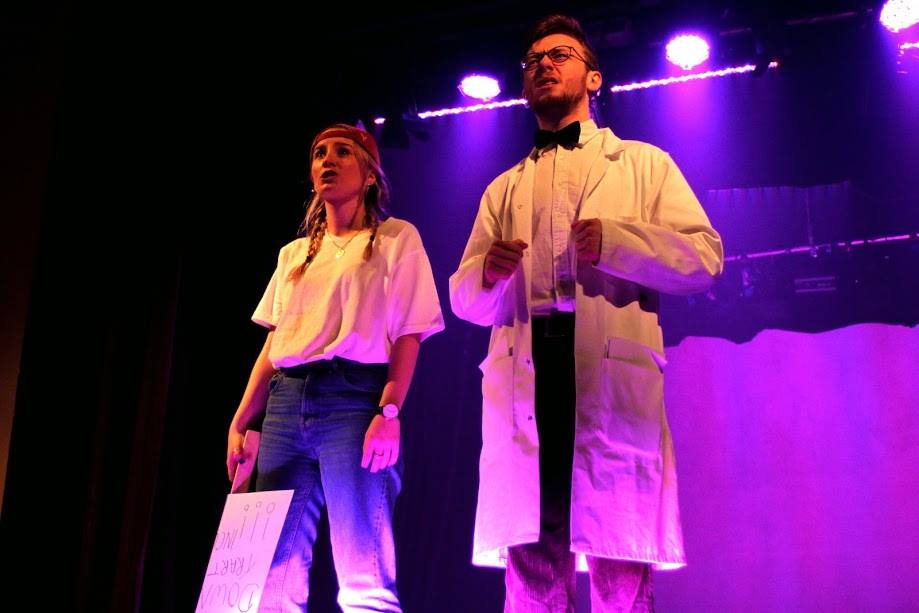 As we enter the theatre and the underwater world of ‘Aqua Spectacula’, we are immediately plunged into the unknown. We cannot hear the same music the first character who dances to music through her headphones but are offered instead a soundtrack completely out of time with her own. This lack of congruity continues throughout the play, set in an underwater game world where people at times speak over each other, rarely make eye contact and in general misunderstand one another. Visually overwhelmed by the obscure lighting, the many characters on stage at a time, the kaleidoscopic shadows on the back wall almost doubling the quantity, we are just as confused as the female protagonist, named Geoffrey, who has also been plunged unknowingly into this world.  However, despite the claustrophobia of being trapped here, external reality invades. This starts off as pressure from Geoffrey’s mother to find employment and develops into the much wider concern of global warming. This is an issue which affects us all, which is made clear when all of a sudden, the lighting is turned on over the audience. We become active participants in the play, agents who are given responsibility: should Geoffrey attend the party or take part in the environmental protest? The competitive individualism of a game show in which the goal is to win becomes one whose preoccupation is community spirit. 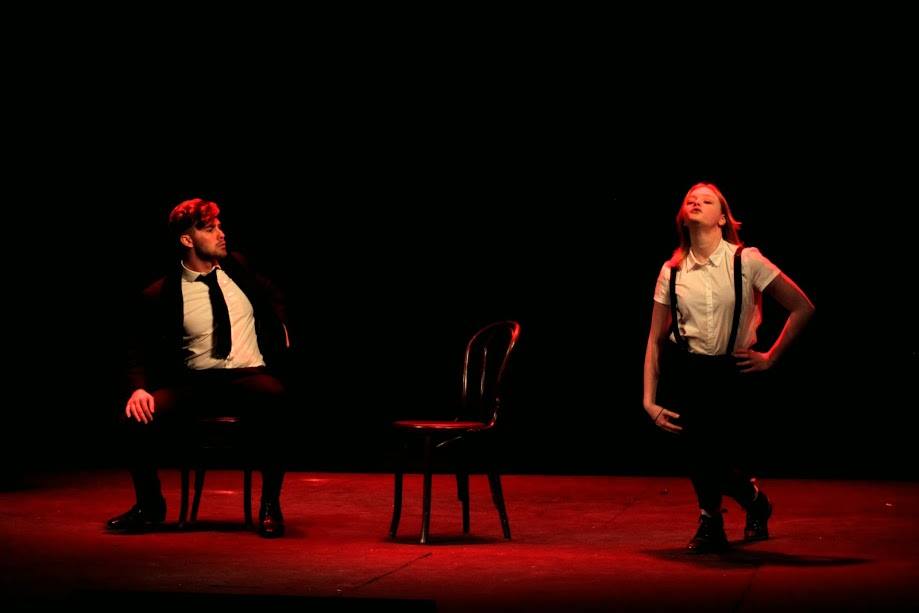 Whilst ‘Aqua Spectacula’ is spattered throughout with light humour, ‘The Adventures of Slick Tuffman: A Noir Comedy’, is unceasingly funny from start to finish. The script, by Mike Bedigan, parodies and mocks throughout, is packed with jokes, riffs off of pop culture and is just generally relentless in its fun. Luke Maskell as Detective Slick Tuffman was a delight, sometimes even he couldn’t hold in the laughter, but this generally added to the humour of the show and didn’t detract from his (excellent) performance. He gave Tuffman the bravado of every stereotypical cop you’ve ever seen in a TV show and demonstrated the self-awareness aptly as well. Switching rapidly from persona to persona, Emily Georgina was the highlight of the night however, in a multitude of characters, with the restaurant scene being a particular standout. By the end of the production each of her characters were recognisable, and there wasn’t a single weak link in any of her portrayals. They also slipped into their onstage personas of themselves and back again to their characters very admirably also.

Out of all of the shows, it was the one that paced itself the best (something that it was very self-aware of) and no moment felt wasted. It felt as if it was the one the audience responded to the most strongly as well, a crowd-pleaser that didn’t talk down to its audience, and a sense of humour that hopefully the DST will welcome back in the future. 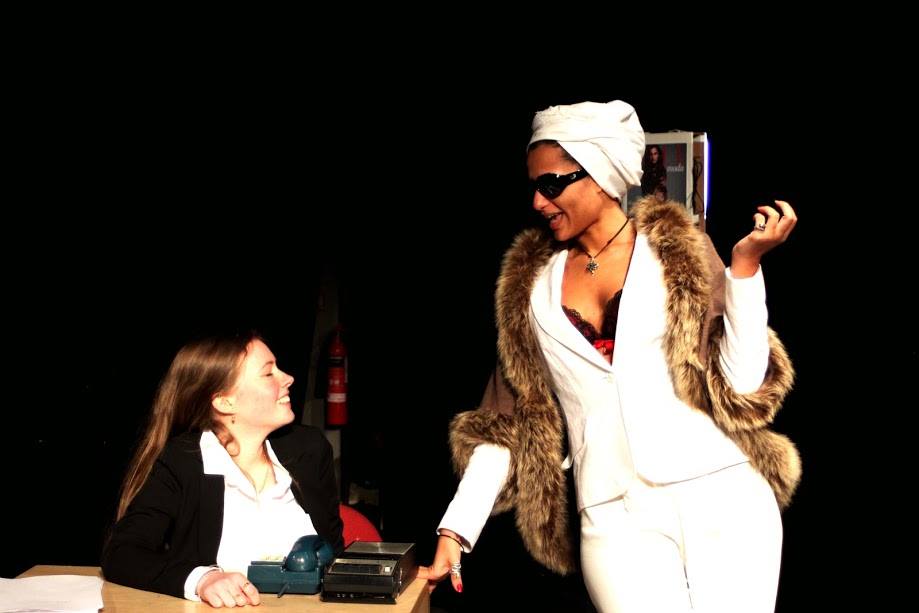 Whilst we are kept in the dark at the start of ‘Aqua Spectacula’, ‘Cloudburst’ begins with the sound of a toilet flush and a verbal stream of swear words. It is consequently clear from the outset that nothing will be hidden from the audience in this play – we hear what is often censored. In a similar way, Alana’s thoughts are unfiltered in a nuanced performance from Eleanor Hawkins. Alongside Hawkins, Savy Kyo Des-Etages and Dan Hodgkinson give wonderfully dramatic performances in the stereotypes the audience always loves. Hodgkinson’s egotistic actor provides humour but cannot help her in this situation which is about someone else, someone else who hasn’t even been born. Here I think it is commendable on Zac Tiplady’s behalf on being able to write a situation many women have faced, and he does evoke successfully the invisibility and isolation so many women feel on a daily basis.

Full of flashbacks and music which gradually speeds up, the play mirrors perfectly the inner turmoil of Hawkins as all the spiralling thoughts that come with the dilemma of abortion overwhelm her mind.  She herself torn between two priorities – is the baby an ulcer to vomit out, or a parasite, a tumour? This is shown visually as the photo (on side is baby scans, other magazine covers) rapidly spins around, the set design overall is used rather cleverly to imitate the mental state of the character.

Insightfully written, ‘Cloudburst’ provides an interesting look at the ethical dilemma many women face at some point in their lives. It brought the ‘Assembly Rooms’ Night to a poignant end as it encouraged the audience to think about the character outside of the play, in contrast to the pieces beforehand where the characters were confined (literally) within their genre.

‘Assembly Rooms’ Night is part of DDF and will be running for one more night at 7.30pm, on Saturday 10th February.