Director’s Note: Bring It On, The Musical 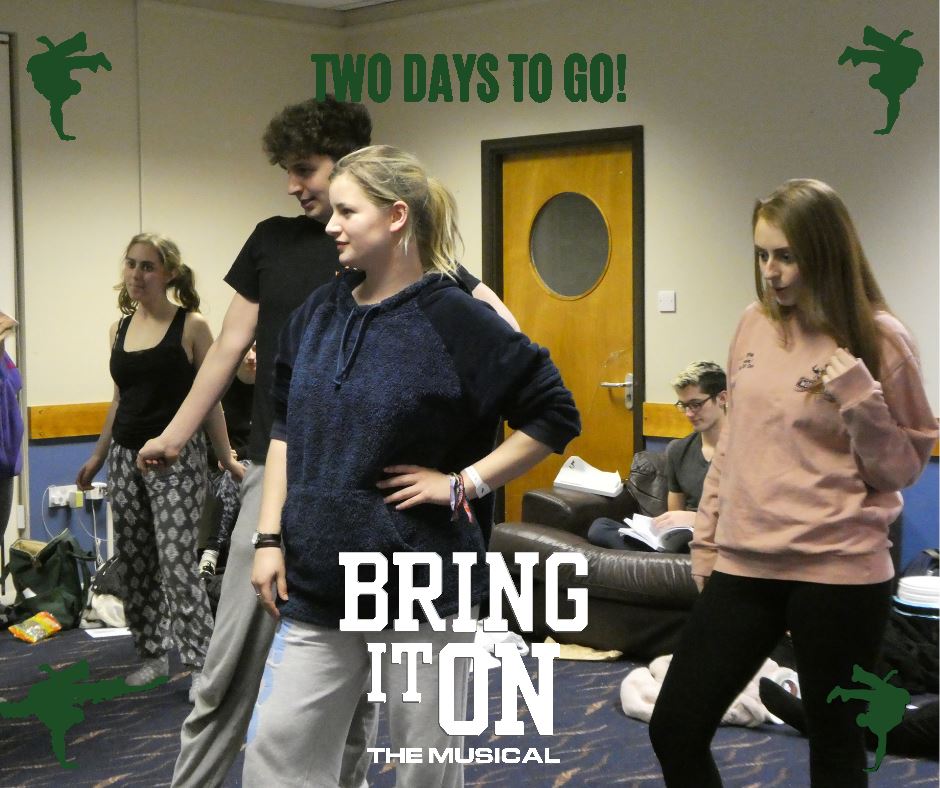 Bring It On, The Musical in rehearsal.

Bring It On, The Musical is Durham’s next upbeat production. It is energetic, super relevant and very sassy, exploring themes of friendship, jealousy and competition. With its explosive choreography, you’ll be sure to have a lively evening.

How have you found the planning of the production?

Challenging. Stressful. At times terrifying. SO MUCH FUN.

What inspired you to put on the play?

What is something you’ve worked particularly hard on?

Teaching non-cheerleaders to stunt in a month at a level they’d feel confident at. Cheer isn’t for everybody, but they all have picked it up so quickly and I’ve been so impressed with their dedication and willingness to learn a sport where you throw a literal human being in the air.

What are the main themes?

I would say the main theme throughout the show is friendship – how it’s made and broken but also how having people around you who you care about and who care about you is more important than anything else! I hope this is a message not only the audience will take away but the whole cast and crew! (they’re all adorable and I love them to bits).

What aspect of creating this production did you find most difficult?

Definitely the choreography! It’s described as a ‘dance heavy’ musical anyway, but we struggled to find a choreographer who could commit that level of time and energy to the show (completely understandably!) – because of this we split the responsibilities between myself and two assistant choreos. I knew I’d be teaching a lot of cheer, but trying to choreograph and teach actual dance numbers, such as We Ain’t No Cheerleaders, was way out of my comfort zone. Fortunately the cast have been super understanding about that, and at times even great at choreographing sections themselves!

What is the hardest decision you’ve had to make during rehearsals?

Not letting people do what they wanted to on stage, I think! From the start, especially when it came to cheer, I promised the cast I would never make them do anything they didn’t want to do, and I think (I hope!) I’ve stood by that. But I also can’t let them do everything they want to do; for safety, timing or practicality reasons. As much as Woodplayers aspire to put on the best shows we can, we also try to make sure everyone involved has the best time they possibly can – it’s one of the reasons I love the society so much! But as a director I feel like I’m the one who has to put limits on that and say no to things, and I’ve definitely struggled with being ‘the bad guy’ at times!

How did you go about casting for the production?

Casting a Woodplayers production can be a little difficult as we try not to open up to other colleges so members of Collingwood can always have a go (we have a strong emphasis on enthusiasm over experience when it comes to casting!), but that often means you know a lot of people who are auditioning. I’d be lying if I said I didn’t have ideas of which characters certain people would fit into. But from the start, the audition panel were open about our thoughts and we let people audition for whatever characters they wanted and tell us their preferred size of part. This meant that sometimes our initial thoughts were proven right – but occasionally someone would come along and completely floor us with an audition for a character that we never would have expected.

What aspect of creating this production did you most enjoy?

This sounds like I’m trying to just be nice but I promise it’s the truth: everyone I’ve had the privilege of working with! From people who’ve never worked on a musical in their life to those doing their fifth Woodplayers production, everyone has given this show their all (and put up with a lot of shouting from me). They’ve worked so hard and are all so talented and I’ve loved every minute I’ve spent around them – even the minutes where we’ve all been shockingly hungover and sleep deprived).