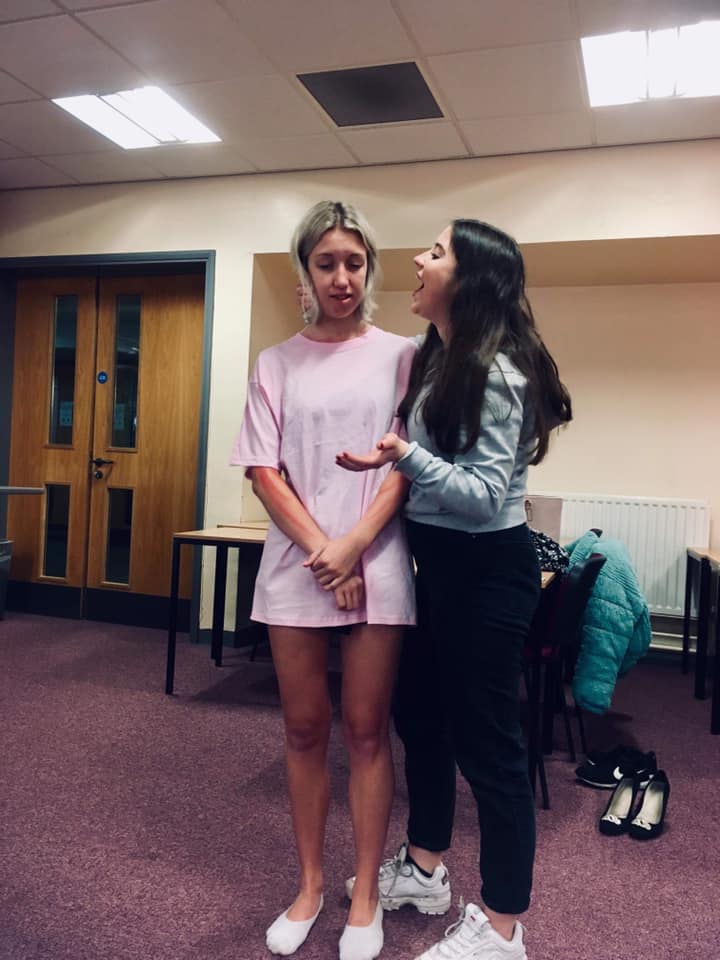 ‘Two women, ghosts from each other’s pasts, meet before a funeral. One of them defiantly maintains that having lipstick and a Porsche is not a betrayal of feminism; the other’s anarchist principles have turned into an organic fruit and vegetable company who supply to Sainsbury’s.’

All Over Lovely by Claire Dowie is a biting dialogue about adolescent sexual awakening, politicised lesbianism and how to be a woman in the modern feminism world. As soon as I read it, I knew I wanted to show it to Durham. Its innovative and unique writing style and Dowie’s ‘Stand Up Theatre’ is something I haven’t yet seen in the student theatre scene, especially not presenting such a serious, intensely emotional plot. In the term of Pitch Productions’ ‘What we aren’t supposed to talk about’ and Sightline’s post-colonial ‘The Tempest’, All Over Lovely sits pretty perfectly in the centre of things, uniting the paradox of identifying as a woman in the midst of the entangled politics of being one! I have absolutely loved the opportunity to bring the play to life as an exploration of my own, and the rest of the team’s, experiences of feminism, and to hopefully to encapsulate at least some of the audiences’ experiences too.

I always, always wanted the focus of All Over Lovely to be on the actresses. They carry the whole play themselves, and I knew that very little else would be needed if the women could tell their story authentically. Throughout the rehearsal process, myself and Harry (Assistant Director) have created a space where we have hoped that our actresses, Ruth and Gabbie, can speak in their own right. Characterisation and gaining an understanding of each character’s thought process within, and leading up, to the play has been the foundation of all the work we’ve done; it has been the starting point for every single detail of intonation, every movement, even how the stage has been moved. We have worked outwards entirely from characters who pre-exist in their own right. Further to this, the question I have repeatedly asked is, ‘what do you think?’ At times, as a director, I think it’s often easy to project a vision onto the performers and work with a very ‘tell’ approach, e.g. ‘you do this’, ‘move there on this line’. For some theatre, this is very much effective and necessary. But I knew it wouldn’t work for All Over Lovely. For this show, I have consciously tried to maintain an actor-focused rehearsal space, where every decision about the characters and how they think, feel and act has been a result of a conversation with Ruth and Gabbie. Our own experiences of womanhood, sisterhood and sexuality lie underneath this piece fundamentally; we have taken our life experiences and used them to inform character development quite explicitly. I believe this is what makes the finished result so powerful: the audience and women on stage co-own, and co-exist, in the space, enabling a real dialogue to take place where we, as the audience, can truly assess our sympathies, objections and stance.

The venue – the overspill room of St John’s Bar – is perhaps unusual, but I was extremely keen to use a space which would help to capture that intimate yet almost relaxed and informal feel that Dowie’s script demands. All Over Lovely is a conversation where the audience is the third person, silently listening as the other two participants try to tell their side of the story. I want the audience to feel close to the characters, close enough to be able to take their side. This is taken even further through our use of no lighting or sound. By stripping back the space, the characters are exposed yet brought down to the audience’s level, and, as a result, I hope the audience feels part of the performance in their own critical judgement of what happens to the women.

So, what’s the point of this play? Well, firstly, it is crucial that this sort of theatre is performed and seen in Durham. Not only does it openly discuss female sexuality and lesbianism in a raw, unromanticised light, but it does so without shying away from the complex implications for politics and feminism, explicitly demonstrating the many, many complicated and emotionally-fraught aspects of a feminist dialogue, separate from pre-conceptions and stereotypes. Dowie shows us what’s underneath our rigid boxes and categories: from insufficient Sex. Ed. to the difference between being feminine and being a feminist (if there is one!) We begin with two very distinct ‘types’ of woman and end up with a multitude of different, simultaneously conflicting and harmonious viewpoints, where the two ‘types’ become redundant. These are issues affecting every woman, and every person.

Letterbox Productions’ All Over Lovely is on 21st, 23rd and 24th June at 7pm in St John’s College.