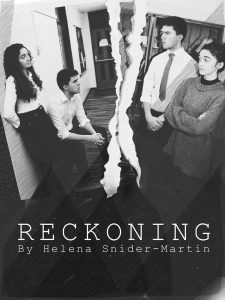 On the surface, Helena Snider-Martin’s Reckoning is a light-hearted play. It tells the story of two GCSE students at a Christian school who have recently been caught in a compromising position by their bumbling classics teacher, and are now awaiting their punishment. An audience of university students, however, is likely to (perhaps with a twinge of sympathetic embarrassment) relate to the awkward, post-sex interaction between the teenagers as they wait outside the headteacher’s office.

Catherine Wright and Max Greenhalgh perform the roles of both the students and the teachers, and their chemistry is their greatest strength, aided greatly by Snider-Martin’s realistic dialogue. Greenhalgh is endearingly awkward as John, a young man struggling to accept his own sexuality, while Wright is bolshy as Rachel, and stern as Mrs Wood, even executing a convincing change of accent. The two bounce off one another, and both their crude banter and more serious arguments seem genuine. For a play that is largely about relationships, this rapport is necessary.

At only half an hour long and with such a small cast, Reckoning is deceptively simple. While it certainly has its fair share of comic moments, (although many of its jokes are reflective of a sixteen year old’s sense of humour, Snider-Martin’s script earnt genuine laughs from the audience, proving perhaps that nobody is ever too mature to appreciate a classic sex joke) this play is much more than a dirty comedy. It navigates issues of toxic masculinity, peer pressure, and sexuality with refreshing ambiguity. Rachel is an example of the “woke” teenager so frequently mocked by the older generation, but John doesn’t quite agree with all of her views. When she makes a joke about accusing him of coercing her into sex, he is angry: ‘how can you talk about oppression,’ he says, ‘and then make a joke like that?’ It’s a topical issue, and Snider-Martin handles it with unbiased sensitivity.

While the main storyline, and the more memorable part of the script, is the relationship between Rachel and John, the meeting between the classics teacher and the school’s headteacher is an amusing side plot. Their discussion of the students eventually turns to their relationship with one another, and when Mr Peters is rejected by conservative Mrs Wood, it’s apparent that even in middle age, relationships are still strange, complex things.

Reckoning is an enjoyable play, both as a comedy and as an exploration of teenage sexuality. At times painfully relatable, this short play might make you cringe, but it’s also a comfort to know that it isn’t just you who can’t flirt.