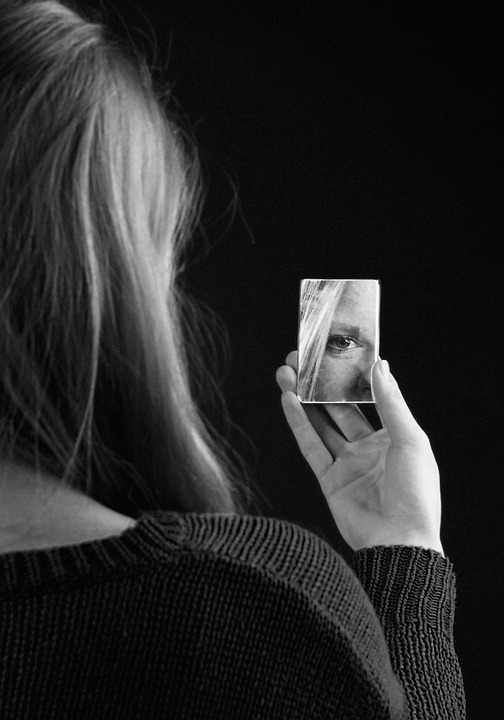 She opens the curtains slowly, watching as the early morning light streams towards the wall, reflecting off the small square of glass and rebounding in every direction around the cramped bedroom. The wallpaper is faded and grey, with tiny dark spots above where the desk used to be: the ghosts of old posters and timetables tacked to the wall. Only the mirror, a simple glass panel, holds her attention for more than a minute. To her surprise, time has left it clean, shining and bright, presenting a perfect replica of its vague surroundings. Wall, window, curtain, floor. She starts towards the door to leave.

For a moment, so briefly it felt accidental, she catches sight of her reflection. Barely a flicker of movement, less than a second of eye contact as she walked past, yet it creates some sort of intense vitality in an otherwise ambiguous and empty room, some spark of being that is at once familiar and totally alien.

She steps back, slowly, expecting to see herself again, a face she barely recognises between its unkempt hair and overtired eyes. Instead, a small girl – she’s three at this moment – is sitting on the floor in a heap of lace and synthetic pink fabric which she knows to be a princess dress. A small tiara rests precariously on her crest of fluffy hair, its plastic diamonds sparkling with an artificial quality in the daylight as she prances around the room. Her sticky palms clasp a delicate silver wand, now bent out of shape in recognition of the hours she has just spent striking it enthusiastically against almost everything in the house (this was to no avail as the cat still, tragically, remains a cat and not a frog). Her shrieks of delight as she falls over in her skirts fill the tiny room.

She turns around to see this girl for real, to ask if she can join in the game – but no sooner does she do so than the child is gone.

She looks back to the mirror. The child is older, about thirteen, tugging at a blazer which covers her thumbs and a skirt which threatens to touch her knee. Her hair is thinner, mousier, pulled tight into two long plaits which rest uneasily against the school crest on her front pocket, its intricately embroidered Latin motto an austere command she does not understand. She’s forcing a smile, one that doesn’t reach her eyes. Soon there’s a shout from downstairs and she runs off to get in the car for the first day of school.

A minute later, she’s back again, five years older and different. Taller, thinner – too thin, probably – and happier. She says she is, anyway. She comes closer to the mirror, dabbing at her face to cover the angry red skin around her eyes, and wiping away the black lines of mascara which have run down her cheeks. She reaches for the phone in her pocket, but at the last second thinks better of it.

She calls out before the person downstairs has even finished saying her name. It was too quick, like an automatic reflex.

She remembers being surprised at how normal her voice sounded that day, at how easy it could be to pretend that nothing hurt.

No one else appears in the mirror. The room is derelict again, the light pale and unforgiving, the reflection tired and familiar and very much current. The ghosts are gone, generations of the same soul living in the same room, landmarks of a slow deterioration of person, stored behind glass like museum exhibits. The happy toddler; the frightened child; the depressive adolescent. Visions of a life lived under glass, an identity shaped through years of self-destruction, years of seeing the same face every day staring back, without any more answers than it had the day before, and no promise of finding any tomorrow.

The subject was last seen entering her childhood home in the early hours of Wednesday morning. Police investigating the disappearance found the building to be entirely empty, save for a mirror which appeared to have broken when it fell off the wall. We would like to appeal for anyone with information to come forward.