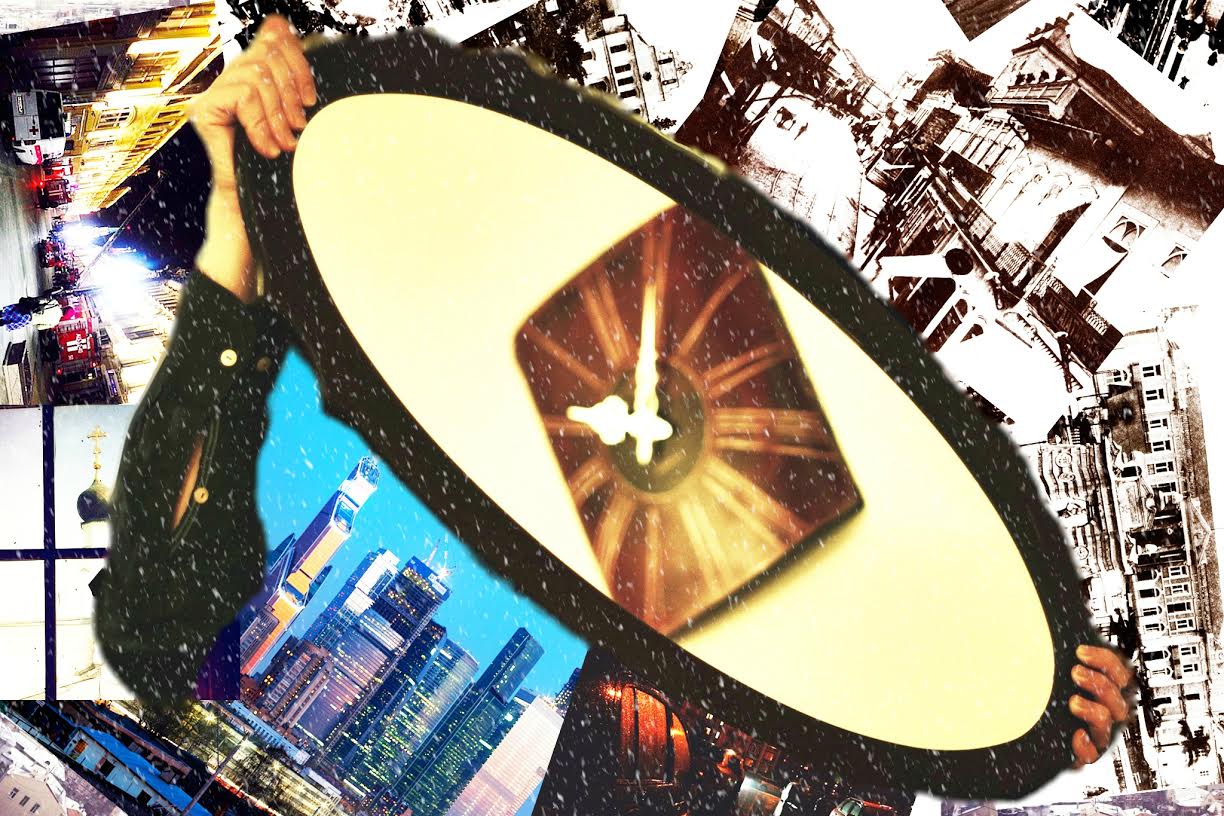 Photo manipulation created for this story by Olga Usik.

In school they told Michael about the French invasion of Russia, a part of the Napoleonic Wars. French forces entered Moscow in 1812, and as a result eighty percent of the city was burned down. Eventually, Napoleon left Russia and the war was soon over, but it all taught Michael to be suspicious about the French in general.

Michael really liked Moscow, and he enjoyed walking in the streets, looking at old buildings. However, the thrill of touching a different age back through centuries, which he often experienced during his walks, was often poisoned with thoughts about 1812. Many buildings were reconstructed after the war, many were built later, but a professional eye could almost always tell: “This is a piece of original architecture of XVIIIth, but that one there was most likely burned and then rebuilt.” This was painful for Michael.

As a sensible person, he obviously didn’t transfer his attitude to the French from the past into the present. He perfectly realised that most wars are not fought by nations (and nations change over time as well), but perhaps by governments or even individuals. Michael’s grandfather died defending Smolensk in the Second World War, but this didn’t make his grandson hate Germans. Instead, Michael could actually feel that many of them thought they were somehow guilty of the events of the past. In his turn, he felt sorry for them, because he knew it was not their fault and that most currently living Germans had nothing to do with that tragedy in history. Actually, Michael did a joint project with a German architect once, and enjoyed it.

However, Moscow was really Michael’s favourite city. Once he was offered a chance to collaborate with a French architect, but the work included partial destruction of a building from 1853. Even though it was constructed after the Napoleonic War and was not exceptionally beautiful, Michael couldn’t make himself take part in the project. Despite all his tolerance and ability to detach history from “real life”, he rejected, and someone else did the job instead. It was hard for him to see any buildings collapse, but more importantly Michael just couldn’t accept the fact that he would be planning a destruction of the building in Moscow together with the French architect.

Michael went to Paris one day, and liked the city. He climbed the Eiffel Tower as any other tourist would do, enjoyed the view and took some photos. He ate French bread every day and found it delicious. He wandered in the streets and his mind was not flooded with thoughts of soldiers who marched there in, say, 1810, before burning Moscow down. Actually, he knew that most fires were started by Russians, in order to drive the French away and not let them stay in the city comfortably. But it made no difference for Michael. Anyway, he didn’t think about it in Paris.

He met a French girl in the hotel. She was from Marseille and was staying in Paris for a conference. She was a student in music theory. Her name was Jacqueline. She was beautiful. Truly beautiful. He fell in love with her. He didn’t mind her being French. Almost.

In the morning he asked her: “What do you think about the Napoleonic Wars?” She said she was not good at history. Michael spent more than a month with her. He went to Marseille, met her parents and liked them. One night, he couldn’t resist asking the same question again. Jacqueline said that history was not that important. Things happen, the guilty get punished or escape prosecution, humanity gains experience and life goes on. Tragedies happen, but we are completely detached from them by time. Because time is linear and takes history away from us. Forever.

Michael couldn’t believe his ears. He made a final weak attempt: “But the buildings? The aesthetic, the wonderful pieces of architecture – and – and – and – music! And people! Got destroyed, vanished, to never be seen again!” Jacqueline replied that nothing lasts forever and to cry because of something lost long ago means to lose time. It took Michael two horrible days of inner psychological fight to admit that he lost. He returned home.

His love for Jacqueline was very real. He suffered. For all his life, he imagined his end in an empty cold house, and was okay with it. Oh no – he did love women, and had plenty of them, but never thought seriously about spending a life with one. He preferred to enjoy himself, and art, and nature. Until he met Jacqueline.

He wouldn’t buy French bread in Moscow. Neither before the trip to Paris, nor after.

Thoughts of a possible future life with Jacqueline bothered him. He started to watch French movies about love. He hated them. Eventually, he got completely stuck in his idea of a lonely, cold house. It was his last resort. He stopped noticing other women. A year passed.

Michael came to the conclusion that time is not linear. Our past is our future, he said. Past exists in future. Then he saw a new movie about a French girl falling in love with a German guy, whose grandfather was a fascist. Poor girl couldn’t stand the image of it, as her own family suffered from Nazi dictatorship during World War II. She couldn’t bring together her feelings and her history, so she committed suicide. Michael thought it was ridiculous. He felt he was ridiculous, too. He called Jacqueline. They got married. He was happy. He moved to France. He ate French bread. He built houses for French people. He no longer suffered from seeing buildings collapse when walking in the streets of Moscow. Yes, they went there often. He told Jacqueline stories about different houses, and she liked it a lot.

Michael’s attitude to the French became as smooth and neutral as his thoughts of Germans. He started to enjoy French movies. Eventually, he stopped thinking about the Napoleonic Wars. He came to the conclusion that our future is our past. Future shapes the past. He liked the dialectics, and went to sleep.

He never thought what present is.