Jamal Kinsella in Creative on 3 September, 2015. 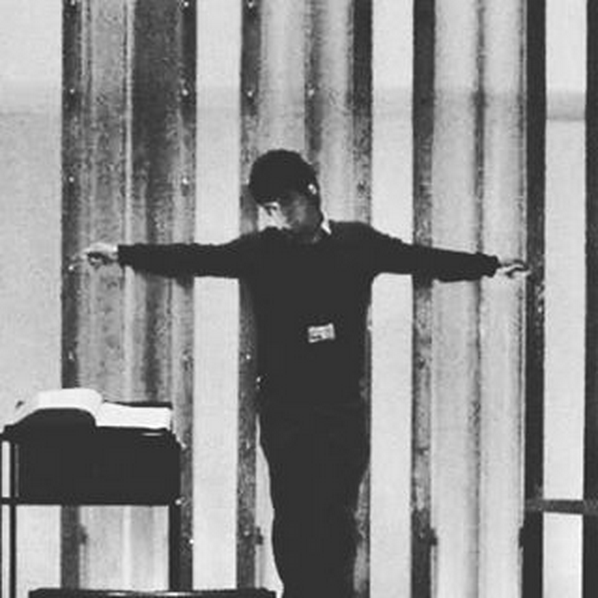 There is an angel who comes from the sky every night to remove from earth my loved ones on a crucifix of barbs and briars.

It first appeared as an unhappy accident, then an unfortunate coincidence, next, a despair-filled arousal of suspicion, until finally, fear and paranoia and trustlessness.

It is an angel of void with facial features that twitch not with emotion or humanity but with disfigurement and disarray. It spasms in a way that further dissuades from feeling than even the blankness of white.

The order is arbitrary and unpredictable; first, my colleague, second, the man who sells my daughter ice cream, third, my wife.

Yet, the angel does feel. The angel – somehow – has chemical impulses that alter its drives and conjure a neurotransmission of godly ethics. There is no more suitable phrase for this process.

My brother, my optician, my boss, my childhood friends, my doctor, my co-workers, my old classmates, my relatives and my dog. All the social links I worked a lifetime to build up disappearing in an instant – before my burning pupils, informed by my callous brain.

I do not know how I know this as there can be no physical indication from the angel. I can only conclude it communicates these mind-altering feelings in terms of telepathy, PSI or the like. It is this that concerns me the most; a robot’s murder is page 6 material, a deviant’s is issue-worthy.

I seethe and writhe with confusion. I spent twenty-five years working on a life free of confusion and it whips back at me like the tail of a wriggling whale.

Every night I plead with the angel and tug at his crucifix. The angel cannot hear my words or see my face. It is unaware of my existence, even. In spite of all its complexity, it is programmed to do this bidding. The ones it chooses are damned as soon as midnight falls.

I fall to the floor, reach the sky and beg whatever is more controlled than me to set things right. I twist and contort around the muddy puddles of the rain and beg the man on the face of the moon.

I want to merely understand the angel. With so many loved ones to crucify in binds, I have had far more than adequate time to adjust to life with the reaper. I want to hear his words, bear witness to his testimony and to theorise any humanity there may be – at least, until.

No, Angel, please don’t do this! You’ve taken enough. She’s not worth it!

Until he came to his last victim.

Anyone but her, please!

It was so obviously coming, yet I was too blinded with fear of nature and logic that I missed it entirely.

That was my biggest mistake.

Anyone… Literally, anyone but my daughter. Please.I had no choice but to submit everything. I went to the park nearby, chased away the pre-teen thugs and started a fire. I used a deceased friend’s truck to carry everything my house owned except a blanket for my little girl as she slept at 8pm.

I threw every item I’d obtained one by one into the roar of a man’s only, frenzied choice. I watched my most expensive possessions burn, my clothes, books, ornaments and every keepsake I’d received from all those who’d died from the angel before today. I had nothing to remember them by and it felt orthodox.

I’m sure she’d be mad at me if she knew I threw out her number one teddy, Toto, who had been passed down for three generations now from her mother. But it was necessary.

By the time I was done, I only had two more hours until the angel’s arrival. I drove back home, carried my daughter from the house and burned it down with the aid of gasoline. I was pre-occupied with my daughter’s heavenly snoring.

I drove to a sharp turn on the road several miles from my house that viewed the horizon. It was nearly midnight and my daughter still snored. I wished she would snore forever, even when awake, in these gentle decibels of beauty.

I carried my daughter out of the car, and used a heavy box with the last of my possessions to weigh down the pedal and drive off the edge of the cliff. I held my daughter, wrapped in a sheep’s coat, to my chest as I stood half-naked in the approaching final day. She slept still, and my chest palpitated for what seemed like millennia – wherein the sky cooed and haunted, the earth ossified beneath my feet, an entourage of crows flew over me and their cries became a murder of chaos, where it was impossible to say where one began and another ended.

The closest thing to harmony was restored when the angel fell carrying a cot and crucifix. The cot was for my daughter. She had long since grown out of cots but the horrors of what were to come required an amount of innocence that transcended love itself.

I had the first panic attack of my life. I wept on something that choked me. My actions were no longer my own.

I was no longer the man I was even yesterday; I attacked my brain in attempt to find a way to prevent this. Clearly, the angel could not be converted to logic. I needed to create my own logic to fight it.

He began walking from the sky to the last hallowed cliff in the universe.

Please wait! I’ll do anything! Not her! I’ll give up anything, just not her! You… You…

You don’t understand! You wouldn’t know! You… You’re not…

He spun his crucifix to awaken his arm and get a feel for the motion – mere crucifixion was not enough for her. He was going to stab her through the heart.

You’re not a father!!

He dropped the cot.

You can never understand what it is to have an innate bond with a product of your own body. I don’t know who you think you are but until now I haven’t been who I really am.

He dropped the crucifix.

I should have stopped you a long time ago but I just didn’t realise my own strength. If I have to be a god to stop you, then you’d better prepare to feel my holy wrath.

They were just words. Words appeared to have stopped him.

No, not words. Ideas. Humanity.

Now, it’s time to end this.

From seemingly nowhere, I had a baseball bat firmly in hand as my daughter slept behind me. Her snores were becoming sluggish. I had to do this with all the strength that I needed her to have.

Please don’t hate me, honey; I need to use your strength.The angel threw the holy symbol until I hit it with the bat, twisted it from his hands, disarming the thing and leaving the cross to pulsate on the ground. I cracked him over the head in a mighty swing, knocking him to the ground as he swam in blood. His wings clipped. I leapt forward and batted, swinging and commanding myself to hit flesh. Hit flesh. I aimed for the head and changed my will and rewrote my brain chemistry to signify crack as the chief good.

The disenchanted being clawed at me and raked my skin, turning itself demonic and dragging my legs to the netherworld as I retaliated with a crunching final blow that allowed it to fall gracelessly from this world in the pitfall of blood it itself had conjured.

Wrapped in blood and impurity, I held my daughter and felt my bones crackle, my head snap and my brain pulse. Under the freezing light of the moon, I arched my body toward the horizon and saw the mirage that would restore the sanctity of the world.