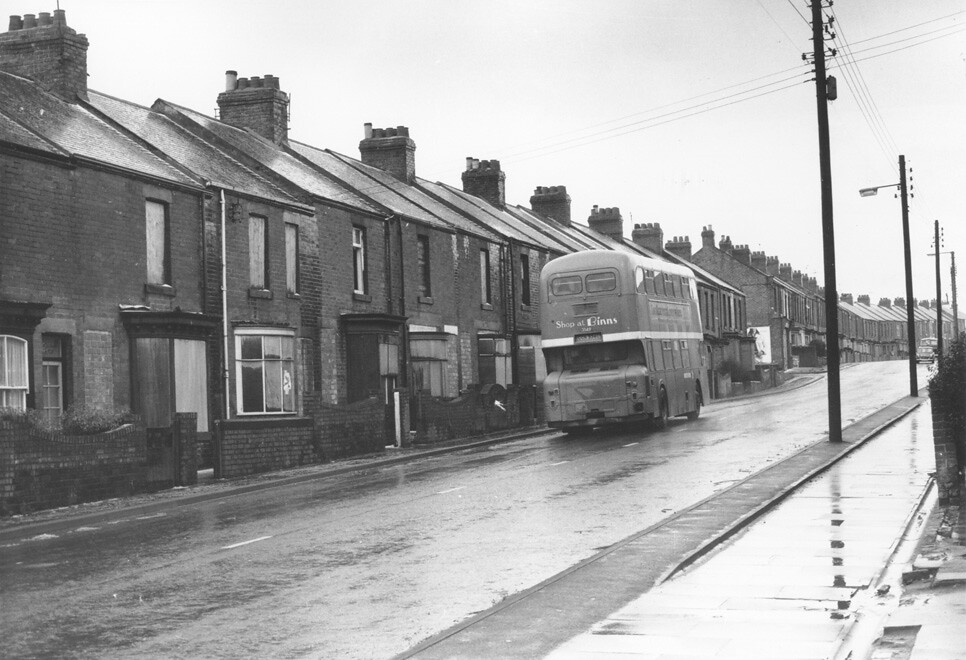 It was a Tuesday, and warm for April. I had been to the corner shop and now held a brown paper bag of iced buns which were congealing into a large, gloopy mess under the dual pressure of the sun and my hand. The streets were abnormally quiet. My mind was somewhere else, far from the rows of take-a-penny houses on streets worn down with walking but not yet stained with gum (going back, a few years ago for my latest book, was a voyage into keeping your shoes clean).

So, at first, I didn’t notice him.

Then again, that could have been because I’d only ever seen his back before, leaning in the doorway of my sister’s bedroom, a long line of spine attached to a purple coat and adorned with straggly, greasy hair. I’d never seen his front due to my father, who had taken a distinct disliking to him that could only be expressed constantly, and with varying degrees of language depending on his audience. So it took me a while to recognise him- I barely noticed the figure leaning elegantly against the house-facing lamppost, hands tucked with style into his pockets. It was only once I’d reached the gate of my house, my hand ready to push, someone grasping my shoulder did I realise who my assailant was.

It was the coat that did it; a bright purple frockcoat is hard to miss, especially when paired with a sharp green waistcoat and trousers too tight either for decency or the weather. I absorbed his face, deciding I could use it as something against my sister, categorising the bulbous nose (red; puffy; spots) and keen blue eyes peering out of hangdog lids. As I stared, he noticed me, and immediately seemed to try to smile, though it came out twisted and closer to a sneer, although with something flinty in the dimples rather than Elvis’ ‘come-hither’ look. He walked over to me with a defined swagger and arms swinging loose and carefree, as if were you to drop him in the middle of Savile Row or Buckingham Palace he’d fit in and find his place immediately. I’ve spent years trying to capture that walk.

‘You’re Peter, aren’t you?’ I nodded; his voice was harsh and discordant, and more than anything I wanted to run into my house. ‘Could you run a little errand for me?’ (what? what could he want from me? how quickly can i get to the front door is he quick he’s older than me he’s got his pals i wish jeannie would give him up what happened to fred he used to give me pocket money)

‘Yes.’ I said. I’d evaluated my options and decided I’d rather not incur his wrath.

‘Grand. Would you,’, he grimaced, reaching into his pocket and retrieving something that looked like a chunk of grease-stained, crumpled newsprint, ‘give this to Jeannie? Tell her I’ll be round at 7.’

‘Grand.’ He slapped my shoulder again, gripping it tightly for a second, then drew back. He stood there for a second, an eye on my sister’s bedroom, and something seemed to infect his smile – in hindsight I’m inclined to call it lust, but then it seemed like slime, spreading as his smile widened and his teeth shone. Then after a final look at me, he turned on his heel, and walked into the road.