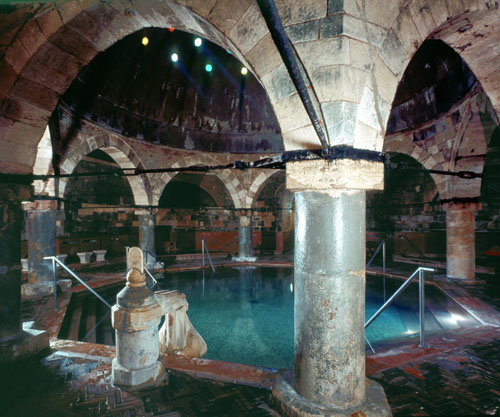 Inspired by Morcheeba’s song “Slow Down” and visiting the Rudas Thermal Spa in Budapest, known as the city of spas. The dialogue is a translation from Hungarian.

She was a middle-aged married woman with two children and it were exactly 742 days since she has gone last to the spa. A loving and devoted mother though she was, Judit’s heart rejoiced when she entered the octagonal hall with thermal pools: alone at last!

“Which pool should I enter first?” she wondered, turning her head slowly from side to side like a panoramic camera across the spacious chamber. She twirled around to see the time and smiled when she found out she has nearly two hours before she has to pick up the children from school. Facing the pools again, two elderly women suddenly brushed past her – skin on skin, wet against dry and Judit winced when she saw that they were naked. She turned in panic towards the notice board and to her relief, it said that it is a women-only evening. Just then did her eyes finally see the fully-exposed female bodies everywhere – on the marble benches, in the pools, behind the glass sauna doors… And she panicked again she realized that she was the only one dressed in a swimsuit.

Judit did not mind the absence of the testosterone-driven gender – but what did make her feel anxious was the reality that she was surrounded by nudists. She studied them: the older women laying with their legs crossed in the water, exposing their genital hair to the ceiling and their breasts separated from the chest, pointing upwards like spaceships and when walking, they had jelly-like corpuses and yet were gracious in the way they carried themselves between pools before slowly diving in. In contrast, the embarrassed youth with firm bodies reminded one of a hunted prey by the speed they ran from pool to pool before crying out in relief the moment they hid into the refuge of a chin-high water bath.

Judit felt uneasy and insecure: two pregnancies left stretch marks on her body, the belly was not as flat as it used to be and her still milk-filled breasts drooped down like tree branches with heavy ripe fruit. In addition, her thighs augmented in size despite the marathons around the household, her arms were strong from carrying her children, yet were flappy and most of all, she was aware of the unattended bush present underneath the one-piece. As a result, she felt as inappropriate and lonely as a seagull in a wheat field, to quote Truman Capote.

She moved forward and dipped her toe into the water. It was pleasantly warm, so she began to slowly plunger herself into it. Walking down the five-step marble staircase, Judit was enjoying the unique sensation of her swimsuit clinging to her body – it brought the image of love-making into her mind. She sat down on the lowest stair, exhaled slowly and once she got comfortable, she closed her eyes.

Within moments, Judit felt relaxed – she let all worries and negativity float away and instead enjoyed the impression of time slowing down. She opened her eyes to study the ceiling: it was a dome with holes that were filled with star-shaped glass pieces. Red, lime green, yellow, turquoise – a colourful sky that she projected on the inside of her eyelids after she closed her eyes.

The next time she opened them, she yelped – a white transparent substance was coming out of her thighs. “What on Earth is that?!”, she exclaimed in her mind, panicking. Hesitating at first, she then touched it, trapping a piece of it between her wrinkled fingers, fishing it out of the water and bringing it in front of her eyes. She signed in relief when she realized that it was old skin. She studied it more and after determining that it resembles snake skin or wet tissue paper, she rubbed it off with her hands.

In peripheral vision, she felt somebody was staring at her – so she looked in that direction and her eyes met those of an older woman, a living Botero figure. They stared at each other for a while longer in silence, the faint swishing sounds of waves filling the background. It was the stranger who broke the ice:

“Take off the swimsuit, my dear.” Judit frowned: who was this, her mother?

“Why?” the woman asked. Julianne now thought her rather nosy.

“Because,” she began responding, “I-I’d simply rather not.” The woman rolled her eyes:

“Why, your figure? Not perfect, not sticking together?” She slapped her thighs. “So what? My body old, looks like caramel in sun. It’s an ugly sight. But here, here only women – and with nothing on, one’s soul is free. Going to the spa is not only a physical action, but also of the mind – your body tense, your mind tense, here you make them both loosen up.” Judit looked at her and thought the lady very pushy, especially when she said: “Take the swimsuit off, my dear.” Judit stared at her, her mind processing the words just said. She rationally shook her head in refusal, leading the woman to turn her eyes towards the ceiling: “Okay, okay, fine. Stay tense” and she calmly left for a different pool.

After a while of intense thinking that included cursing the old woman and then criticizing her own prudishness, Judit turned her head around. Like a radar, her eyes searched for the old woman, spotting her sinking into the 48°C pool as easily as a water-loving reptile. From there, they watched each other for a while, until something in Judit just snapped.

“Whatever!” she suddenly cried in her mind – and looped the neck string over her head, slid the nylonic cloth down her slippery body, stepped out of it in the water and finally placed it onto the tiles behind her. She looked back, in direction of the old woman, who gave her a thumbs-up and smiled. Victoriously, Judit then faced the ceiling – and beneath the stars, she bathed until the old cleaning lady gave the call for everyone to leave.