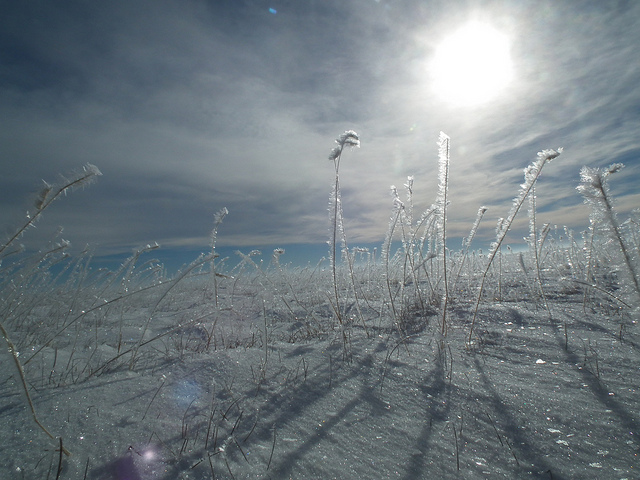 “A landscape of infinite nothingness.”

Ice. Cold, hard, blank ice. An empty plain bearing the weight of a sheer, white sky; the world was no more than a landscape of infinite nothingness.

But sometimes, sometimes there was wind. The wind teased the ice, dared it to move, to change, to grow, to break. The wind wanted to see the ice play. It knew what could be created: the feather-like flakes, whipped up whirls of snow, an impenetrable white wall. But these were of another time, another place. The wind grew bored with each meeting. It would come again, it always did, foolishly overestimating its powers of manipulation.

Once, there was fire. The fire did not come alone; the fire brought the people. The people believed that they were the leaders, but in truth they could not control the flames that danced and swayed and leapt and stabbed at the sky with a burning blade. Suddenly there was warmth and light, and the flatness of the world disappeared. There were shadows, hollows, cracks and splits. There were points and spikes, daggers and swords, the horizon sliced through with a jagged edge.

Far off lay the ocean. The ocean surrounded the ice, punctured it and lay within it. The harsh white had learnt to live beside it, but the ocean never crossed the ice. It never took the risk of caressing it, never dared to choke it with dripping, bruised hands. For in doing so it would condemn itself to the life of the ice – a blank existence.