Madeline Hourigan in Creative on 3 December, 2021. 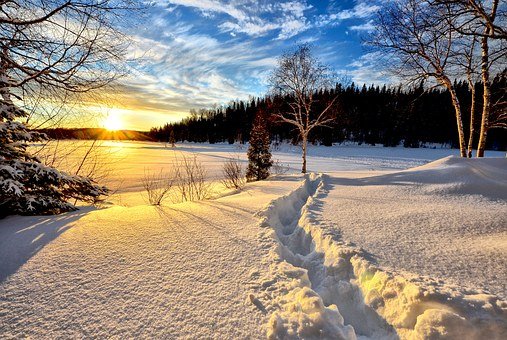 “Do you need to call someone?” the nurse said.

I jerked, not having heard anyone come into the room. I forced myself to focus on her words, looking up from my shaking hands to answer.

I opened my mouth, trying to force the words out past my swollen throat with little effect. I nodded, causing more tears to roll down my bloodied, swollen face.

The nurse went to the door and stuck her head out to speak quietly to the police officers stationed outside.

My ears were ringing. I was out of it; I knew that. Whether from the pain coursing through me or from the medication the EMT’s had hooked me up to, I couldn’t tell. It was odd, I thought, that all I could think about was the beginning. What had I missed? Why hadn’t I trusted my gut the first time alarm bells started ringing and left?

My inner ramblings were cut short when the nurse dropped a phone onto the bed. It was snowing outside, the sticky white flakes hitting the window, already covering the ground in a thick white blanket. December 23st, nearly Christmas, and this was how I was spending it. Her eyes looked on me with pity, and I curled up a bit tighter, shying away from her gaze.

Lost in my own thoughts, I realized she’d been talking and was looking at me expectantly. I nodded again, having caught enough to understand she was telling me to press the nurses’ station button when I was finished with the phone.

With one last glance and a mumbled “Ok, dear”, the frazzled nurse left the room, her buzzer already calling her to another emergency.

I was panting, my breathing speeding up like I’d just been for a run instead of dialing a phone number I knew well enough I could recite it in my sleep. The lump in my throat was growing bigger, buoying up and down uncontrollably as I tried not to cry again. Trembling, I lifted the phone to my ears and listened as it rang.

“Luna,” the voice said as the call connected, “we were saying we hadn’t heard from you,” I could imagine my younger brother pulling the phone so as not to deafen me as he yelled, “Hey Ma, Luna’s on the phone,” muffled voices buzzed for a minute before Rey spoke into the phone again.

“Sorry Luna, we were fighting over who got to ream you out first over not gettin’ in touch,” he trailed off as the sound of my sobbing reached him. “Hey, what’s wrong? Are you ok?” the playfulness was gone from his voice, and he began speaking in urgently. “Luna, talk to me. Where are you?”

“Hospital,” was all I managed to choke out, so damn ashamed I could barely speak.

Rey spat a curse so creative that under normal circumstances I would’ve laughed, but all I could do was cry harder, the bed shaking under the force of my sobs. I could practically feel his anguish, and that just cut deeper than any pain I was feeling. My words had hurt him. I knew what I was going to have to say, because I couldn’t hide anything from my family, would only distress him further.

I started hyperventilating, tears wetting the sheets under my cheek. The room I was in was warm, but I felt like I was outside, cold and alone in the snowstorm. I could hear Rey talking to me, but I couldn’t focus on what he was saying – my chest felt like it was going to crack open at the thought of telling him —

Suddenly a new voice spoke into my ear. “Luna,” the word was said so sharply it should’ve scared me, but hearing Rishi settled my hysteria if only a little. “Honey, I need you to breathe. Slowly, yes, just like that,” he said, and I focused on his words, trying my hardest to do what he said. Minutes passed as Rishi talked into my ear, patiently but firmly, until his rumbling voice had soothed me into a calmer state. I could picture him staring at me, with that heavy brow pulled low, staring at me through his golden-brown eyes, unnerving me until I gabbed out whatever I’d been hiding.

If Rey was a rain shower, Rishi was a hurricane.

It all came tumbling out between my hiccuping. How stupid I felt. How embarrassed I was. How he’d seemed nice when we started dating, and I’d written off the little things as a stressful day at work or something I’d done or…well, the list of excuses I’d made had gotten very long. The flashes of anger had been so at odds with how he’d been the rest of the time that I hadn’t realized how controlling he was until it was too late.

“He…hurt me,” I said, cutting off when I heard a growl come from the phone. The fury I could hear, contained in that sound, was the reason I’d not been calling. How could I hear the voices of my family and not feel like a big old liar Extraordinaire? Thinking back on the times I’d brushed off questions about my bruises after he’d held me too tight, or shaken me too ruffly. Gods, I felt like an idiot. But up until tonight, he’d never outright hit me, and that was what I had clung to, not believing I was in that kind of relationship.

“Last question, meri jaan. Why are you in the hospital?” Rishi said softly, making me pause at the sudden change in his voice.

“I, um, went out with some people from work. We went to a bar and just had some drinks. I wasn’t even out that long, maybe an hour or two, but when I got home,” I bit my lip and fought to swallow my giant pride which had stopped me telling anyone what was happening, “h-he, just, flew at me, asking me who I’d been with, where I’d been and what I’d been doing even though I’d texted him. He was screaming, saying I was a liar, that he knew I was cheating on him. He started hitting me, c-calling me names, saying I was cheating,” I gulped, struggling to get that last word out, scraping up every inch of strength that hadn’t bled out of me. I continued, rushing the words out now, wanting this to be over, “And I couldn’t get up and — um, I guess a neighbor must have heard and called the police. I woke up in the ambulance.”

“The doctor said I was lucky he didn’t break my shoulder — he pushed me into the kitchen table — but otherwise I’ve just got bruises and cuts to deal with.” I gulped, trying to wet my dry mouth before I continued, rushing through to get it over with, knowing Rishi was going to ask if I didn’t say it, “He didn’t do anything else, didn’t t-touch me. Once I passed out, he must have left but, ah, there are a few police going to his apartment to try and find him. To bring him to the station.”

The silence seemed to stretch as I waited to hear what Rishi would say, staring out into the night as the snow floated down.

“Your brother and I are getting on a plane tonight.” He didn’t stop when I protested, just kept on melting my heart to goo as he said, “We’ll be there in the morning. Have whatever the doctors recommend and don’t worry, the police will find him. We’re gonna handle it, get you a lawyer if you need one. But Luna, listen to me — you are not to blame. His actions are on him, you understand? And don’t you dare start saying you’re sorry or any shit like that. There’s nothing to forgive.”

The fury in Rishi’s voice had escalated all the while he’d spoken, rumbling louder until each word was said with the force of a gun. But the knowledge that his anger — no, rage — was directed at the person who’d hurt me caused the tension in my shoulders to release. There had been a small but persistent part of my brain that was unsure if my family would forgive me for not telling them before. Would they see me as weak for not leaving him? But getting the confirmation that the bitch in my head was wrong, that I was still loved, was still family, sucked up any energy I had left.

I must have been more drugged up from my IV meds that I’d realized because I felt my lips lift at his final words, spoken in a tone so filled with protective-older-brother-ness that I couldn’t not smile as I drifted to sleep, “You might even be home for Christmas, Sis.”