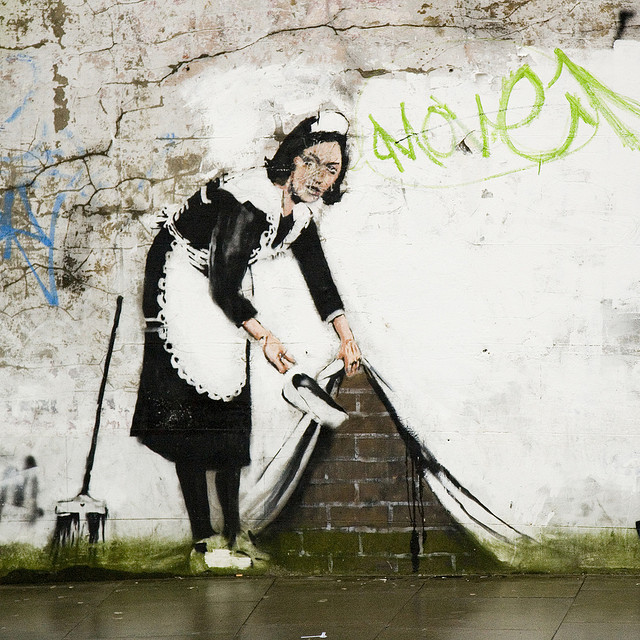 Sweeping it under the carpet…

I start at Mrs Richardson’s on a Thursday morning. Nine thirty precisely, though she wouldn’t know if I turned up late. I never do. Very trusting woman. She’s given me a key to the house so as I can go in whilst she’s at work and her kids are at school. Lovely big house, that one. Set back from the road. Neat gravel path leading up to the porch steps. Just the right amount of green either side. Long windows at the front. Brass knocker on the door shaped like a lion’s head. Sophisticated.

Inside it’s very plain – what you might call chic. The walls are white, or pastel blue in some rooms. The furniture is beige. Expensive‐looking, though. You could say it’s not very exciting. Doesn’t give anything away. Except there are pictures of the children grinning and hugging each other everywhere you look. They look like brats.

The house is usually very tidy. You might think that would make it easier to clean, but it actually means that I have to take more care that every speck of dust is gone, every surface is shining, and nothing looks out of place. I think that’s what makes this house the most exciting; I have to be careful.

I start by hoovering the carpets downstairs, slowly, making sure to get into every corner, under all the coffee tables, behind the sofa. ‘Meticulous’, she called me once. But the kitchen floor is stone, and Mrs Richardson doesn’t like the hoover to go in there, as she says it scrapes against the uneven surface, so I have to sweep the kitchen the old‐fashioned way.

They must have left in a bit of a hurry today, as there are still a few breakfast things out that are usually put away. In the middle of the kitchen table is a tiny glass bowl filled with bright white sugar cubes. I take one out and pop it into my mouth to suck as I’m polishing the table.

I dust around the cupboards and shelves, and spend a good while bleaching the sink. There are little bits of rice clogging up the plughole, and one of her long dark hairs tying them all together. I pull the soggy clog out and throw it in the bin under the sink. Then I open the drawer next to it, choose a silver teaspoon, and put it into my bag.

Upstairs there is more hoovering to be done. It’s a pain to lug the hoover up the stairs, especially as they could afford a hoover on each floor. It’s not much to ask for the sake of my back, and I’m not getting any younger. As I’m carrying it up the base knocks against my ankles, making little cuts and grazes.

There are toys all over the floor in the children’s rooms today. I have to spend longer than I would like collecting them into a pile so that I can hoover the floor. They’ve got more half‐chewed dollies than they deserve by the looks of things. Bet they don’t appreciate how lucky they are.

I pick up the last plastic doll. I don’t want to put her on the pile with the others. All of her clothes are missing. I run my fingers over her naked shiny lumps. Looks alien, to me. Not the sort of thing I’d have wanted as a child. I bend her little stick arm all the way around and wiggle it until it pops out of the shoulder socket. I put it in the pouch of my apron, and then bury the rest of the doll under the pile of other toys. That’ll teach those brats.

The master bedroom is full of very beautiful things, neatly arranged. It pleases me very much to dust around the perfume bottles and nail varnishes positioned just so on the dressing table. She’s got one of those mirrors with wings on either side so that you can see yourself from all angles.

I sit down on the stool in front of the mirror, like I usually do, and take a minute to look at myself from either side. I carefully open her purple velvet jewellery box and lift the pearls up to my neck, letting them just touch my skin. I let them hang for a few seconds, cooling. Then I put them back.

She leaves the money in a brown envelope on the hall table, exactly in the middle, beneath whatever flowers are in the vase. Lilies today. The pollen has fallen onto the envelope a little. I wipe it down with my cloth, and then wipe the table down as well, then gather my things and put the envelope into my bag. The money is always the last thing I take.

The second job on Thursdays is Mrs Grainger, but she likes me to call her Maureen. She lives on her own in a poky little place a few streets away from Mrs Richardson. Her husband died ten years ago. She’s always been very house‐ proud, but now that she’s getting on a bit she needs me to come in once a week and give her a hand with the house‐work. I know all of this because after I’ve finished she makes me a very weak cup of tea and rattles on at me whilst I drink it.

When I arrive (a little late today because of the children’s mess) I ring the doorbell and Maureen peeps through the net curtains in the front room to check who it is. I smile, and after a few seconds I hear her unbolting the door.

‘Hello, pet,’ she says, and then gestures upstairs, because she likes me to start there. She’s not too good at stairs anymore, so doesn’t ever follow me. At Maureen’s I start in the bathroom, because it’s always the worst. Christ knows what the old lady does in there. The pink plastic fittings stain something dreadful. I use as much bleach as I can to cover the smell of talc and cigarettes and urine. Makes me shiver in my stomach.

The only other room upstairs is the small bedroom. She has two single beds in there, each with its own bedside table. Was it two single beds when her husband was alive? The covers of one of the beds are covered in cat hair, which I have to scrape away. Her cat is a great lolloping thing, more the size of a small dog than a cat. He doesn’t come near me, and waddles out of the back door cat flap as soon as I come in.

Maureen doesn’t have a lot, and what she does have is tat. There are rows of funny‐looking porcelain animals on her windowsills and tabletops. All the jewellery in her drawers is plastic or glass. She keeps her week’s pension in rolls of one hundred pounds, made up of five twenty pound notes, in a china cup in the very back of the bottom compartment of her bedside table.

When I go into the bedroom I start by polishing the door, giving me an excuse to close it firmly whilst I clean the other side. Then I go around the other side of the bed, silently open the cupboard of the bedside table and take out three roles of notes. I peel off the elastic bands, and remove one twenty from each roll. Then I put the elastic bands back on, making sure that they sit just in the middle, how they were before, and then put the rolls back in the china cup. I shut the cupboard door, and put the notes in the pocket of my apron, flat, so they don’t show.

When I stand up the animals on the windowsill are staring with their blobby dead eyes. I pick up the Yorkshire terrier, and with my thumbnail chip a chunk off its left ear. Nasty little thing.

Then I make a racket spraying the surfaces and hoovering the floor, before I take the hoover downstairs and do her living room whilst she sits on the settee watching her antiques programme. I wash the lino in the kitchen. There’s no need to do the cooker, as she doesn’t use it any more. She just has cornflakes and biscuits when she’s hungry.

When I’m just packing my things away she shuffles into the kitchen and says, ‘You sit down, love, and I’ll put the kettle on, and we can have one of our nice chats.’

So I go into the living room and sit on the very edge of the settee. I can hear her clinking about with cups and spoons. After a few minutes she comes back in and hands me a cup and saucer. The water has a swirl of brown in it.

Then she goes to the dresser drawer and takes out a white envelope and hands it to me.

‘There you are, love’, she says, and I smile and sip my tea so that I don’t have to say anything. I know she’ll rattle on anyway. ‘More use to you than me! What have I got to spend it on, eh? I don’t need much.’ I hum to show her I’m listening. ‘Still, I don’t know where it all goes! Here and there, must be. You know how it is. And I don’t remember what I’ve spent and when. My son gets terribly cross when I can’t remember. He says there’s no way I can spend so much and not remember.’

I gulp my tea again, smile and shrug. When the cuckoo clock goes off she’ll want her lunch and then I can leave. Should only be a couple more minutes. She speaks slowly. Sometimes it takes her a long time to find the word she’s looking for.

‘He says I’d remember if I spent an extra hundred pounds a week. I say I don’t remember things that well anymore. He shouldn’t worry. I hate it when he worries. But he says he thinks there’s something funny going on. I don’t know what he means, poor lamb. I never know what he’s on about. But still, he said that he was going to do something about it, to make sure. Said he’d be more comfortable if he has proof. So, do you know what he did, love? He came round last night and put a video camera in the bedroom! Well, I wasn’t happy about that, and I told him so. I don’t like to think of someone watching me sleeping at night! He’s got it hooked up to his computer at home recording everything I do in there. It’s not right. I had to get dressed in the bathroom this morning. He says it’s for my safety, though, and when he gets something into his head there’s no moving him.’

The cuckoo clock on the wall starts up.

‘But, look at the time now, dear! I best be having my lunch, and you’ll need to be getting on with your things. Same time next week, eh?

Image by Dan Brady on Flickr.com