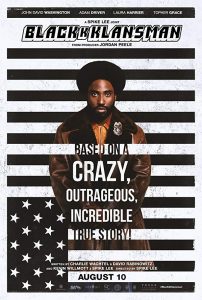 Even for the most casual of viewer, there should be no difficulty seeing why Spike Lee’s latest work took the grand prix at Cannes – it is simply a masterpiece, start to finish. BlacKkKlansman sets not a foot wrong in its 2-hour plus runtime as it masterfully brings the story of Ron Stallworth, an African-American detective who in the 1970s successfully infiltrated the Ku Klux Klan, into the wider public consciousness, and demonstrates both its timeless power and ongoing relevance.

The film opens with a predictably brilliant turn by Alec Baldwin as Dr. Kennebrew Beauregard, an almost too ridiculous white supremacist stereotype who treads a very, very fine line between hilarity and horrifying believability. We want to laugh at his bizarre ideas, we want to cry because we know he (and many like him) truly believes them. This scene perfectly sets the tone for the film, which riffs continually open these tensions and dualities, in terms of content, structure and cinematography. There are many moments that are truly funny, and many that are truly frightening. There are also a great many that, like the opening scene, manage to be both, and it is these that stand out as gems of cinematic genius. 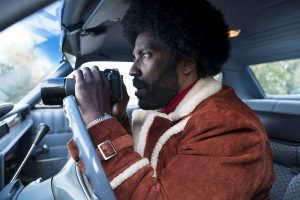 After a rapid introduction, with the era and setting of Colorado beautifully and spotlessly evoked by the visuals, we reach the central premise: Ron Stallworth, undercover detective, begins to infiltrate the KKK via phone, and for all his meetings in person will be impersonated by his colleague Flip Zimmerman, as they together attempt to uncover any potential threats the organisation may pose. The sensory effect is immediate and powerful as we see Stallworth spouts racial hatred to an unknowing and enraptured klansman, and it is John David Washington’s excellently nuanced performance as Stallworth that really carries the motif. Adam Driver was equally convincing as Zimmerman, who begins to struggle with his Jewish identity as he chums up with Neo-Nazis and Holocaust Deniers. All the supporting cast, in fact, deliver wonderful performances, with particularly outstanding turns from Laura Harrier as student activist and Stallworth’s love interest Patrice Dumas, Corey Hawkins as provocative speech-maker Kwame Ture and Jasper Pääkkönen as “craziest-of-the-bunch” klansman Felix Kendrickson. 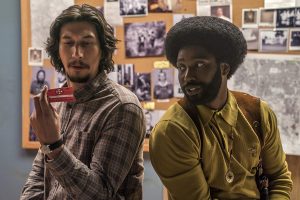 The film unfolds in a fast-paced whirlwind of political issues, managing mention of now-outdated concepts such as “passing” and “miscegenation”, but without coming across as didactic. At around the midpoint, in one of their many political discussions we listen to Stallworth and Dumas talking about Du Bois’ concept of “double consciousness”, of the conflict inherent in being African-American, of how “[o]ne ever feels his two-ness.” This not only has clear relevance to Stallworth, whose status as a cop earns him the title of ‘pig’ from both the KKK and the black rights activists, but brings to mind the central cinematic form of the film, that of duality. Shots are framed frequently as mirrored, one scene blends into another to suggest their similarities and differences, sounds overlap, Stallworth and Zimmerman swap places with almost dizzying frequency as conversations swing between talk of revolutions on both sides. Parallels are continually suggested between these two, and between the triad of the police, the KKK and the black rights activists. Instances of these parallels are too many to mention, occuring almost continually, and it is a true testament to Lee’s skill as a director that this trick is maintained throughout the picture without ever becoming stale.

Tension is the defining characteristic of many scenes, most obviously where Stallworth and Zimmerman seem just about to be uncovered, and in the political differences as multiple as the characters. The most powerful tensions, however, are the personal ones: Stallworth and Dumas’ political differences impacting their budding relationship, Zimmerman’s fresh examination of his previously ignored Jewish heritage running parallel to the investigation, and in my opinion most movingly, in the character of Felix’s wife Connie. Ashlie Atkinson here provides a stunning contrast as a housewife equally devoted to her husband as to the creation of a “pure white America.” At one point they cuddle affectionately in bed, a sweetly framed scene deeply undercut by their smiling, jolly plans to murder as many non-white people as quickly and efficiently as they can. These almost-funny, undeniably painful tensions run throughout the film, repeatedly unsettling the viewer to great effect. 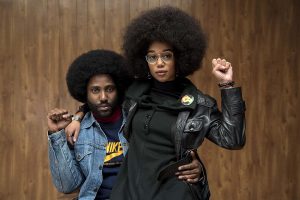 Lee’s film is, for all that, so artfully well-paced that the film becomes neither repetitive nor over-drawn. Admittedly, the frequent scenes of conversation won’t be to everyone’s taste, but the film nonetheless always maintains its pace, and the climax is undeniably an excellently constructed, heart-thumping rollercoaster worthy of any thriller. After this, with the bad guys captured and no one hurt, we might almost be tempted to think that we’ve seen something of a conventional cop movie coming into play at the end. Lee, however, fights against this, and the film in its decline begins to twist and turn away from an ending, as if thrashing in its death-throes. To some it might seem a ‘Return Of The King’-esque affair, as we are first presented with a lighthearted, humorous closer, then a disappointing turn acknowledging the ongoing struggles post-climax, then an oddly abstract, symbolic scene of Stallworth and Dumas observing a KKK ritual from afar, and it is only when the film finally presents us with real-life footage of recent violent events such as those in Charlottesville last year, do we realise Lee’s point – there is no ending, not yet. 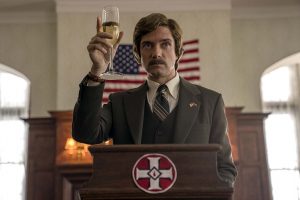 Lee’s attention throughout the film of bringing into question the boundary between reality and satire, of grounding the semi-historical events in reality, comes to its own climax here separate to that of the plot. The film is careful never to erase the underlying human factor, as it never shows KKK members merely as hooded figures but always as men under hoods, real people beneath cheap masks, and thus we now see the most profound expression of the human truth of the matter, that this is still very much something real, that these people still live among us. After Topher Grace’s excellent portrayal of David Duke, leader of the KKK, there is something deeply bizarre in seeing the real man, saying the same things in real life. For those like myself who hadn’t before seen the mass fistfights, the cars ploughing into groups of protestors, the footage is harrowing. The picture ends on an upturned US flag, fading to black and white. In a film marked out by countless moments of genius direction, of incredible acting, of profound demonstrations of the possibilities of cinema, it is these closing images plucked from reality that strike us as the most terrifying, most convincing, and most important moments of all.