The imaginative journey: Storytelling at its finest with Ryan Gander Art, in the name of conventional beauty, prescriptive guidelines, and standardised means of expression has, over the course of art history, been something of a routine. Even the artists, and the viewers themselves, appear to be under constant scrutiny, unable to make the right decision or opinion when faced with the modern – the art of the moment – and of their contemporaries. This however has not always been the case for highly imaginative Multimedia artist Ryan Gander, a multimedia artist from Chester.

Gander studied Interactive Art at Manchester in the mid-nineties, before moving his interests across to the Netherlands to further his research in Fine Art. After gaining the Arts Council of England International Fellowship in 2001, Gander’s UK recognition soared, leading him to base his work between London and Suffolk. The appeal of this unconventional artist is that his works do not necessarily provoke a standard response: in fact they outright refuse to. Gander’s approach was aptly described by fellow artist Richard Wentworth as being threefold; as ‘initiator, instigator, inventor’, dubbing him the ‘cultural magpie.’ His aim is simple in that he works to absorb elements of both pop culture and art history, reworking them into an intriguing and cohesive whole. 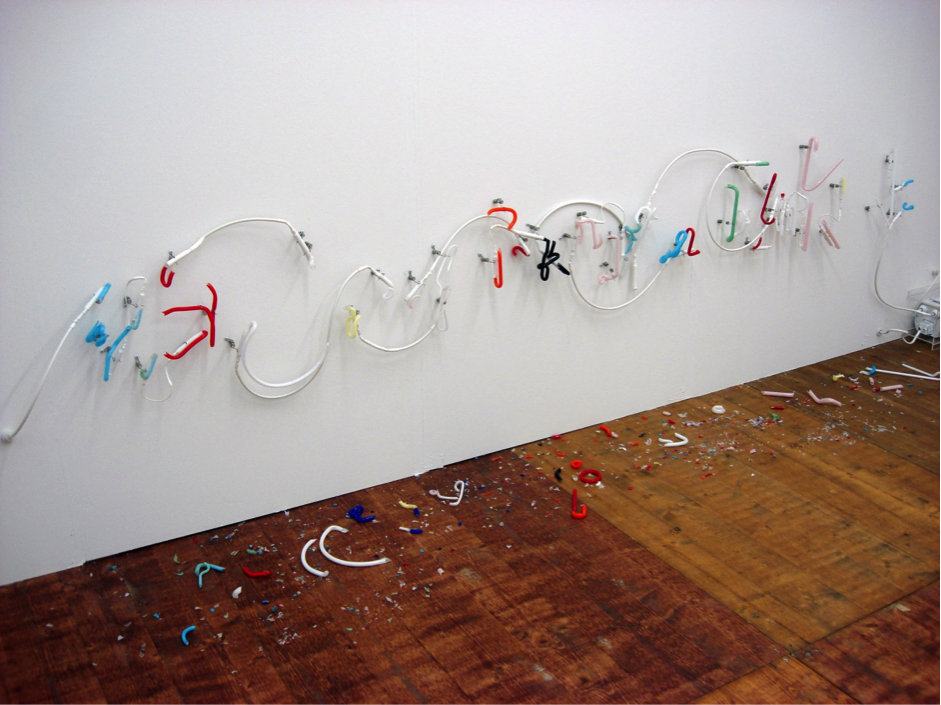 Another element Gander has brought into his exhibitions is the notion of disability in art. As a wheelchair user himself due to a long term physical disability, Gander has harnessed this in his art. In a Venice exhibition in 2011, Gander displayed a ‘self portrait in the worst possible position’, depicting himself whilst falling from a wheelchair. His experiences as a disabled artist have also led him to work in partnership with the Art Council’s ‘Adjustments’ exhibitions, addressing ‘transitional thinking on disability, equality and inclusion’. In these exhibitions, he filled open spaces with objects, causing obstacles and dead ends, thereby symbolising the difficulties that a disability can pose. Having said this, Gander’s unique way of thinking is not always related to his physical condition, yet Matthew Higgs has argued the case for the ongoing contribution Gander’s disability makes to his art: ‘whilst I accept that some people might argue that this information is irrelevant, I would like to think that the fact that Ryan uses a wheelchair does – at least – have some bearing on my subsequent understanding of his work.’

Gander’s primary purpose in his multimedia art is to use sensory elements such as sculpture and sound to bring the imagination of his viewers to life. In the past, fictional government advertising ploys have been put in place, designed to enliven the imagination of the British public. Equally imaginatively, in more recent exhibitions he has enlisted the use of large animatronic eyes, responding to the expressions of the people looking at them. Although some may call his work gimmicky, the artist is heavily rooted in the works of art history: ‘for me it’s essential,’ he has said, ‘to be well versed and eloquent in visual language, and part of that is knowing the history of art, otherwise you’re just using three letter words and stuttering a lot.’ Scattered objects at the ‘Adjustments’ exhibition

The appeal of the imagination has always been a driving force for Gander, with some of his past exhibitions including An Incomplete History of Ideas (2004) and How I learnt to use my senses (2007). And on Thursday 3rd July, Manchester City Gallery opened its doors to display Gander’s Open Spaces exhibition across two of its vast exhibition halls and large work room, an exhibition which I had the pleasure of working on myself. Tucked between the newest installations, foregrounding the innovative uses of multimedia and visual technology, Gander drew inspiration from the possibilities that technology offers: he took hold of the children’s workrooms and made them into an interactive den where they could explore their own thoughts and daydreams. Certainly his work could be called more of a structural daydream than anything else, with video snippets and hideout-den casts peppering the space. There is a kind of constant in the irregularity of his approach, but with an almost reassuringly neutral twist – every space and structure is completely devoid of colour.

‘The idea was to send in families, particularly children, without preconceived ideas about the work,’ says Jess Wild, head of the Learning Team at Manchester’s prestigious museum, ‘we wanted them to enter his world without knowing what it all was about.’ ‘We got a lot of funny looks at first, like, ‘you’ve just placed me in a white room, expecting a reaction ..?!’ ’ she jokes, ‘but after the kids began to take over, people quickly realised that its more about what you think than what you see.’ The overtly modern and conceptual appearance of the work, then, is undoubtedly its USP, but Gander’s work goes beyond this point. His work in which he recycles the artwork of his own children’s, displaying it alongside his own, makes for a perfect pairing, fusing his ideas and conceptions of childhood with the actuality of childhood itself.

For my own experience of this exhibition, I was given some pens and paper and asked to write down what my seven-year-old self saw in his works, whether the dens reminded me of the ones I’d made as a child, or the canvases brought me back to the marble paintings or potion-making I used to do. Walking around his section, then, did become a surprisingly nostalgic experience, because it rids you of the initial cynicism of your adult self, bringing colour into what at first appears a starkly colourless room. As Mark Beasley puts it, ‘Ryan Gander is a story-teller, a teller of tales’, with his works across exhibitions keeping us enthralled from beginning to end.