If you Google ‘paint scraping’, you’ll get a few articles on refurbishment, a few on paint safety, and a couple on kids craft activities. Still, the past two years have seen an increasing recognition of the technique of paint scraping as an artistic practice, as more people than ever began to explore it as a new hobby in lockdown. Easily accessible with acrylic paints (though some artists deviate in their medium) and a window scraper, this technique really does what it says on the tin: simply dot paint onto a canvas/piece of paper, then scrape it to produce a linear and colourful piece. The TikTok hashtag ‘#paintscraping’ has 8 million views alone, while ‘#scrapeart’ has garnered 51.4 million: paint scrape art is in its heyday.

Many lockdown hobby-ists took their paint scraping one step further, not just making the art for their own enjoyment but also for a profit. Etsy’s profits more than doubled from 2019-2020 from 818.79 million to 1725.63 million, as more and more people began selling and buying on the popular crafts platform. The age-old question is brought to mind: can we consider paint scraping art? And if so, where does the boundary lie? In then finding a solution to this question, can we turn to the simple answer than meaning is what gives paint scrape pieces their value? Obviously this article will not be able to find a solution to such a huge question, but it will track a couple of the artists who have been pivotal in this trend and consider the impact they have had.

First up is @sharece.studios, an artist with 44.9K followers on Instagram and 301.1K on TikTok. She is known primarily for her paint scrape art, but also creates works in which she lays glass over wet paint to create a bubble-like imprint. Her scraped pieces often seem to have drawings or secondary layers of paint underneath the upper layer, adding depth to her figures, animals, and scenery. Almost all of her pieces use a multitude of colours, adding a playfulness to her work that runs in line with the idea of paint scraping as a fun ‘craft’ rather than artistic practice. Nonetheless, her work has a deep sense of nostalgia and emotion in the movement of the paint, and her more abstract work especially leaves its meaning ambiguous. The viewer must do some work themselves, a feature that is uncommon in purely decorative crafts. Her works sell for tens if not hundreds of pounds, and her following speaks for itself in the value people attribute to her pieces.

Another leading paint scrape artist is @theartofjaleh, or Jaleh Sadravi, who has a similar following of 201.6K on TikTok and 116K on Instagram. Sadravi’s work focuses on creating a sense of community, and on her Instagram she proudly states:

The faceless figures of her paint scrape paintings stand huddled close together (as a direct result of the technique), each scraped in a different colour perhaps so as to demonstrate the individuality of people within a community. Many of Sadravi’s pieces have a curved line that cuts across the vertical figures, as if they are holding each other close. Her works vary also in colour palette, size, and the extent to which the scrape technique mixes or individuates the figures. Some of her works are slightly more eerie in their colour palette, such as ‘Comfort of Community’ (available on her Etsy shop), but all have the same sense of unity and connection. 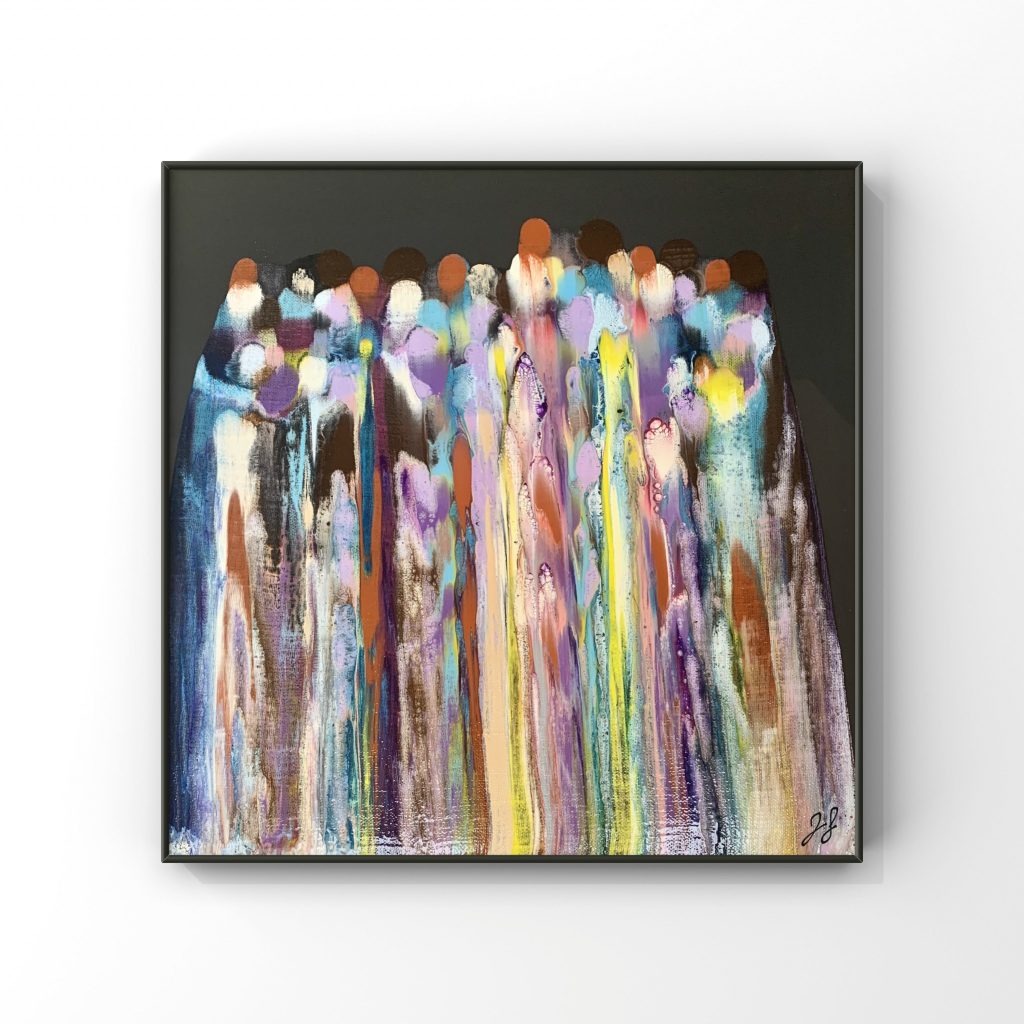 Image and art by Jaleh Sadravi, used with the permission of the artist.

Sadravi admits that sometimes, the scrape pieces do not turn out the way she wants them to. In these cases, she views it merely as a chance to paint over it and create something better: “Getting a result you don’t like is an opportunity to try again”. We can be inspired by Sadravi’s optimistic sentiment, and the meaning that she attributes to her pieces. We might also say that the artistic value of her work is in this very process of painting and repainting, which acts as a kind of self-curation. If a piece does not turn out well, compositionally or in terms of colour/emotion, admitting this and rethinking it puts even more meaning into the works that are then released to the public eye.

Sadravi posts regular videos of the paint-scraping process, a technique which in itself has garnered a following for its satisfying aesthetic and clean lines. For many viewers, the final artwork is not the most important part of a video or post, but the process is. We might then want to think about paint scrape art, especially when documented on social media, as a branch of ‘performance art’, which can be defined as “Artworks that are created through actions performed by the artist or other participants, which may be live or recorded, spontaneous or scripted”. The technique behind scrape artworks presents itself as transparently as the brushstrokes of an Impressionist painting might, and invites the viewer to think not only about the product but how it appeared there. In Sadravi’s case, this furthers the feeling of belonging and community she wants to represent, as the small paint dots are drawn together by the movement of the scraper. In Sharece’s art, the scraping action acts as a revelation, uncovering the more detailed designs layered beneath the colourful paint. It adds a depth and a complexity to her pieces.

Having looked at two prominent online paint scraping artists and considered them in terms of the notion of ‘art’, I seem to have opened more doors than I have closed. The art/craft boundary – parallel to the fine art/decorative art divide – has certainly been narrowed over the last two years with the increase in people experimenting in arts and crafts. Paint scraping is not a new technique, but social media has undoubtedly been the reason for its current popularity as a performative art. These artists are proof that it can be beautiful and complex, and go far beyond the boundary of a simple craft project.

Featured Image: Image and art by Jaleh Sadravi, used with the permission of the artist.