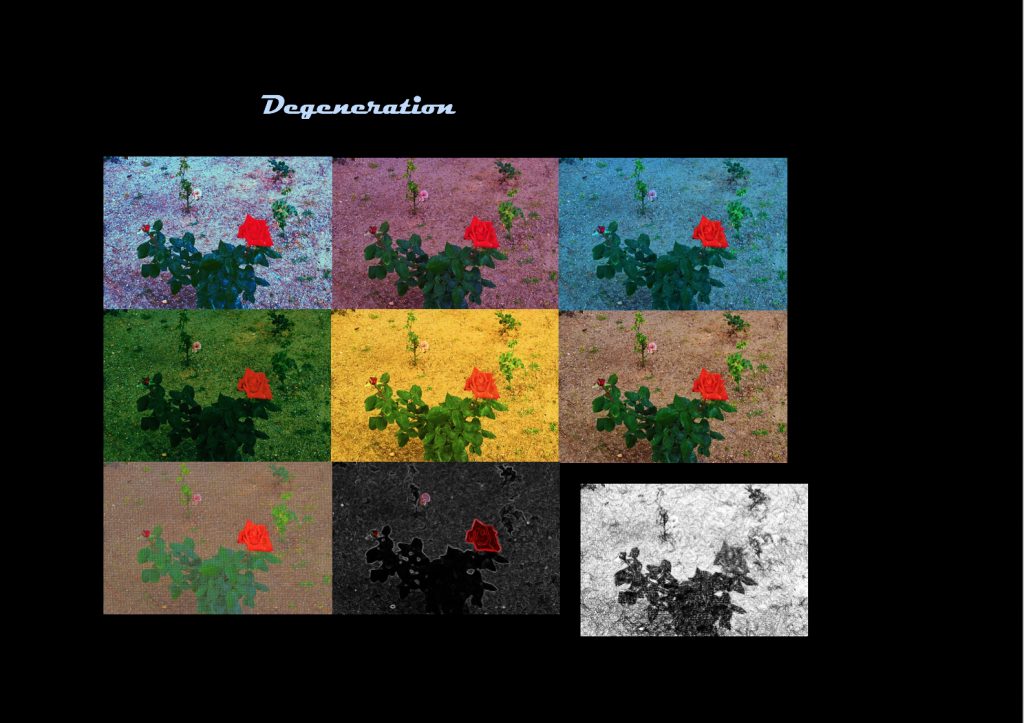 Amongst the many threats to the survival of the human species, climate change is perhaps now the greatest. It is no longer just environmental experts who are speaking out about the dangers of our colossal wastage, huge consumption of fossil fuels and the over-pollution of our atmosphere – whole countries have started to realise that what they do is affecting the world and will affect the future of how we live if we continue to live without ecological consideration.

This series of edits was designed to reflect the process of environmental degeneration that climate change, as a result of human impact, has had on the Earth. The first five colours portray the planet in its original, full beauty, a time prior to the existence of humans. The sixth image depicts our current experience of the world. However, the seventh and eighth show the distorted nature of what we are rapidly hurtling towards if things are not changed soon. And if they are not changed then complete environmental degeneration, as an excess of emissions and waste cause our climate to change permanently, could result in the eventual dissipation of the environment altogether. This is set out in the final image which falls away from the rest of the group, reflecting the irrevocable damage that humans could have on the environment if we continue to remain passive on the issue of climate change.

Climate change, due to an increased amount of greenhouse gases in the atmosphere, can affect temperature and rainfall can and has led to higher water levels and more flooding recently. In Fairbourne, a village in Wales, people may have to be ‘climate refugees’ in as little as 26 years, if rising sea levels rupture sea defences and force them to leave their homes. Sea levels around the UK have risen by 15.4cm since 1900, and they could continue to rise up to 19 inches by 2020, according to a report published in the journal Environment Research Letters. Fairbourne is a neighbourhood of 850 residents, and it might be the first community to be entirely vacated and dismantled, with any signs of human existence erased. But it surely won’t be the last.

Britain may have just declared a climate emergency, and as Labour leader Jeremy Corbyn said, it certainly is a “huge step forward”, but it means nothing if real action is not taken. Labour’s motion has challenged the government to obtain net-zero emissions before 2050 and to achieve a “zero waste economy” within the next six months. Parliament’s declaration of a national environment and climate emergency comes as a result of recent demonstrations held by the activist group Extinction Rebellion (XR) in London and the rousing addresses of the Swedish sensation Greta Thunberg around the world. Thunberg is impressively young and at age 15 she began fighting for urgent action to end climate change, protesting outside the Swedish parliament. Despite her young age, she speaks with a mature conviction that climate change must be dealt with immediately for the sake of current and future generations and she is inspiring leaders and entire countries all over the world today.

Recent heatwaves in the UK may have been enjoyed by many, but they might not be something to celebrate too soon. After the unseasonably warm flush of weather during February this year, blazes broke out all over the country at Arthur’s Seat (Edinburgh), Saddleworth Moor (Manchester) and Ashdown Forest (East Sussex). In addition, warm weather too early can cause some animals and insects to come out of hibernation prematurely, meaning they often cannot find food and are forced to return to hibernation. But their fat reserves are too low and when they re-emerge from dormancy their bodies are noticeably weaker.

There are some who are doubtful over whether or not the unseasonably hot days are actually a result of climate change, and Martin Bowles, a meteorologist from the Met Office says that climate change cannot be the direct cause as, “we’re talking about the weather, not the climate.” But, he adds that “it is a sign of climate change. There’s been a gradual increase of temperatures over the last 30 years so the extreme weather has also been increasing.” The media coverage of the heatwave presents it as something to triumph about, but many think that these pre-seasonal summery days should be a warning to us all and that they should urge us on to limit global warning and our greenhouse gas emissions. Green Party MP Caroline Lucas says it’s time for the public debate to open up – “not about whether our climate is changing, but what we’re going to do about it.”

Jess Jones is a First Year Classics students at Trevelyan College. For more information about her art, contact her on her university email.