Banksy has been one of the most influential artists of the 21st century. The artist has managed to keep his identity hidden while we only know that he was born in Bristol. He has developed iconic works that have transformed the world of art internationally. Some of the topics he embraces are political satire, humor, war, the environment, the authoritarian status, our society, and contemporary politics.

Although Banksy became famous internationally in the 2010s, he has been quite active since the early 1990s. He initially started by spray-painting trains in his home city, Bristol. As street art was considered a crime in the 1990s, he stayed hidden to avoid possible consequences. While he first started working in Bristol, he rapidly conquered the UK and became famous internationally. Most of his inspirations come from the Bristol underground scene. He collaborated with artists like Nick Walker and Inkie while soon he met Nick Lazarides. Nick Lazarides was a photographer who became close to Banksy. Lazarides contributed to the actual selling of his first works and soon became his agent. Another influence of Bansky has been the french graffiti artist, Blek le Rat. Not only the french artist inspired the political themes of Banksy but the medium he used, stencils. The use of stencils contributed to his anonymity. By using this material, he could draw large detailed paintings rapidly.

One of the first most known murals of Banksy has been, “The Mild Mild West”, which firstly appeared in 1997. The mural was used to cover an advertisement of a former solicitors’ office in Bristol. It depicted three policemen being attacked by a teddy bear that holds a Molotov. It took three days to create while drawing various responses from the public. The mural represented the Bristol culture and peoples’ response against the police. In the 1990s, there were various rave parties held in abandoned warehouses. People at the time were angry towards the police stopping the parties and Banksy made them understand that they could fight against them.

One of the most iconic moments of Banksys’ career was the auction stunt in 2018. His famous work, “Girl with a Balloon”, was the final piece in an auction at Sotheby’s in London and was sold for 1.04 million pounds. Shortly after it was sold, the canvas began dropping through a shredded frame. Banksy went on Instagram and posted the picture with the caption, “Going, going, gone”. The successful purchaser was more than surprised. It was one of the most glorious moments in the history of auctions. As Alex Branczik, Sotheby’s Head of Contemporary Art in Europe stated, “We got Bansky-ed ”.

Last year, in 2019, I had the chance to visit the exhibition of Banksy at the Moco Museum. The exhibition was called “Laugh Now“. It is an unauthorised Banksy exhibition that joins authenticated pieces of Banksys’ art for the indoor art market. Most of the works, come from private collections and collectors. It was a great exhibition. Curators have managed to include street art behind the doors of a museum. This contradiction made the experience memorable. 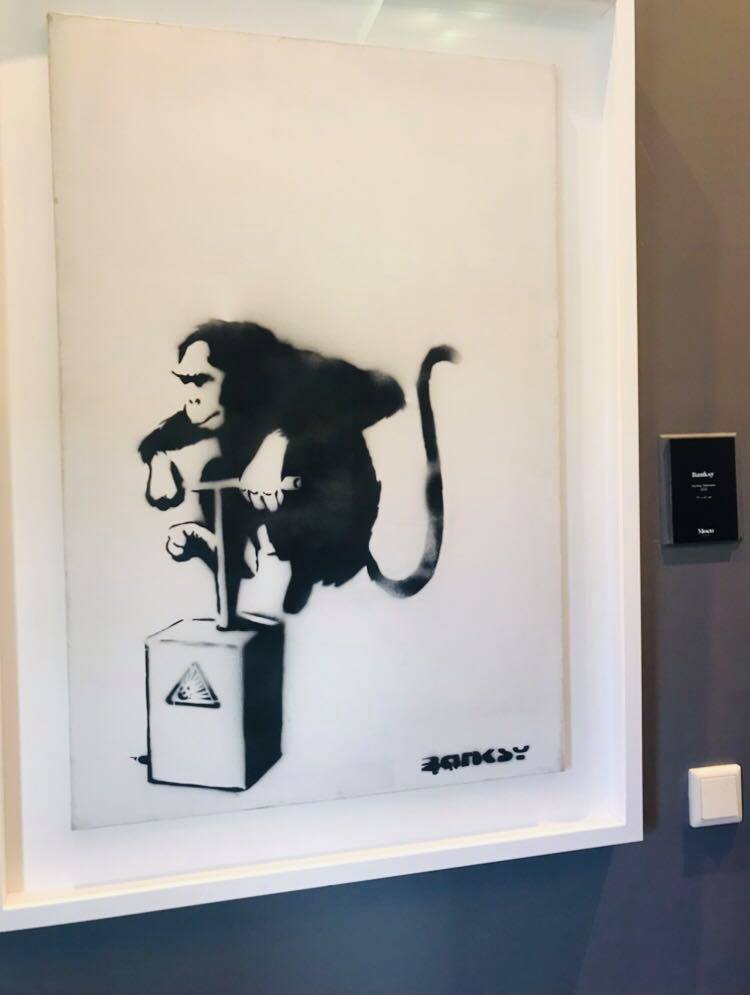 While Banksy has allowed street art to be seen in museums not everyone is satisfied with the messages he promoted. A lot of his works have been vandalised as a reaction against his work. Many have debated whether street art can be recognised as art and even if it fits in museums.

While there are many beliefs, everyone recognises that Banksy has completely reconstructed the art scene.

If you want to discover more about the exhibition in Amsterdam: