Halloween saw a very atmospheric, almost haunting mist sweep over the Durham night sky. When I think about it, the mist of autumn is quite an extraordinary temporal spectacle. While its blurring effect creates a natural rather beautiful abstraction of our familiar landscape it also has an ability to conceal a substantial amount of matter, which can be disconcerting and even frightening.

Needless to say, many artists over the centuries have been inspired by this quintessentially autumnal phenomenon such as John Keats’s, being among the most famous, ode, To Autumn (1819) which opens with one of the most treasured lines in the history of English poetry: ‘Season of mists and mellow fruitfulness’. Keats was of course one of England’s most famous poets of the Romantic area. Romanticism was an interdisciplinary artistic movement from the early to late Nineteenth Century which followed an ideology that included an engagement with spirituality, an appreciation for the beauty of the natural, rather than the artificial, and man’s relationship with nature. Many artists throughout Europe participated in the Romantic tradition, including the German painter, Caspar David Friedrich.

When thinking of the mists we saw at the end of October, I was instantly reminded of Caspar David Friedrich’s work, particularly his Wanderer Above the Sea of Fog (c.1817). This painting depicts a man standing alone upon a craggy rock in a mountain range, gazing out upon the natural landscape before him, which is covered in swathes of fog. 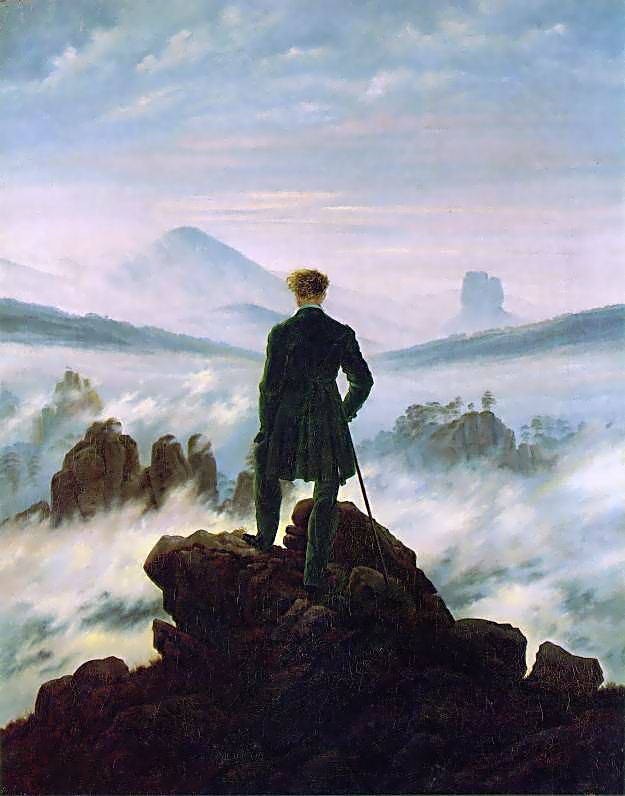 Wanderer above the Sea of Fog
Image: cea + via flickr

Rather unconventionally, the figure in the foreground of this painting is turned away from us so that we cannot see his face at all. I believe that Friedrich has deliberately portrayed the wanderer with his back to us in order to make us focus on the landscape with which he is so transfixed. In this way, the artist makes it clear that the subject of this work is not the gentleman upon the rocks, but rather the sensational act of nature before him. This idea is intrinsically Romantic, as it stems from one of the predominant concepts of Romanticism that nature, in its unpredictability and indomitable strength, has total control over man and as a result should command his utmost respect and admiration.

The title of this work is also rather apt; upon first glimpse of this work it appears that the wanderer may be standing on the edge of a cliff with the wild and rolling waves of an ocean beneath him. This ambiguity with which Friedrich has depicted these autumn mists seems to suggest that this aerial marvel has just as much power to force us into submission as does the roaring, and often dangerous, sea waves.

Friedrich’s wonderful painting conveys not just admiration, but also an intense affiliation with nature. The portrayal of the lonely wandering man as he witnesses the sight of a landscape in constant flux appears to suggest that man and nature have a profound connection which can only be accessed through the deepest contemplation. As one walks through the autumnal landscape of the twenty-first century and marvels at the vibrant orange, russet and golden leaves perpetually falling before us, as well as the inevitable autumn mists, which we know will soon give way icy, barren and freezing winter, it becomes easier to relate to this Romantic philosophy that our thoughts are, and will forever be, influenced in some way by our natural environment.