A Stroll in Yorkshire Sculpture Park 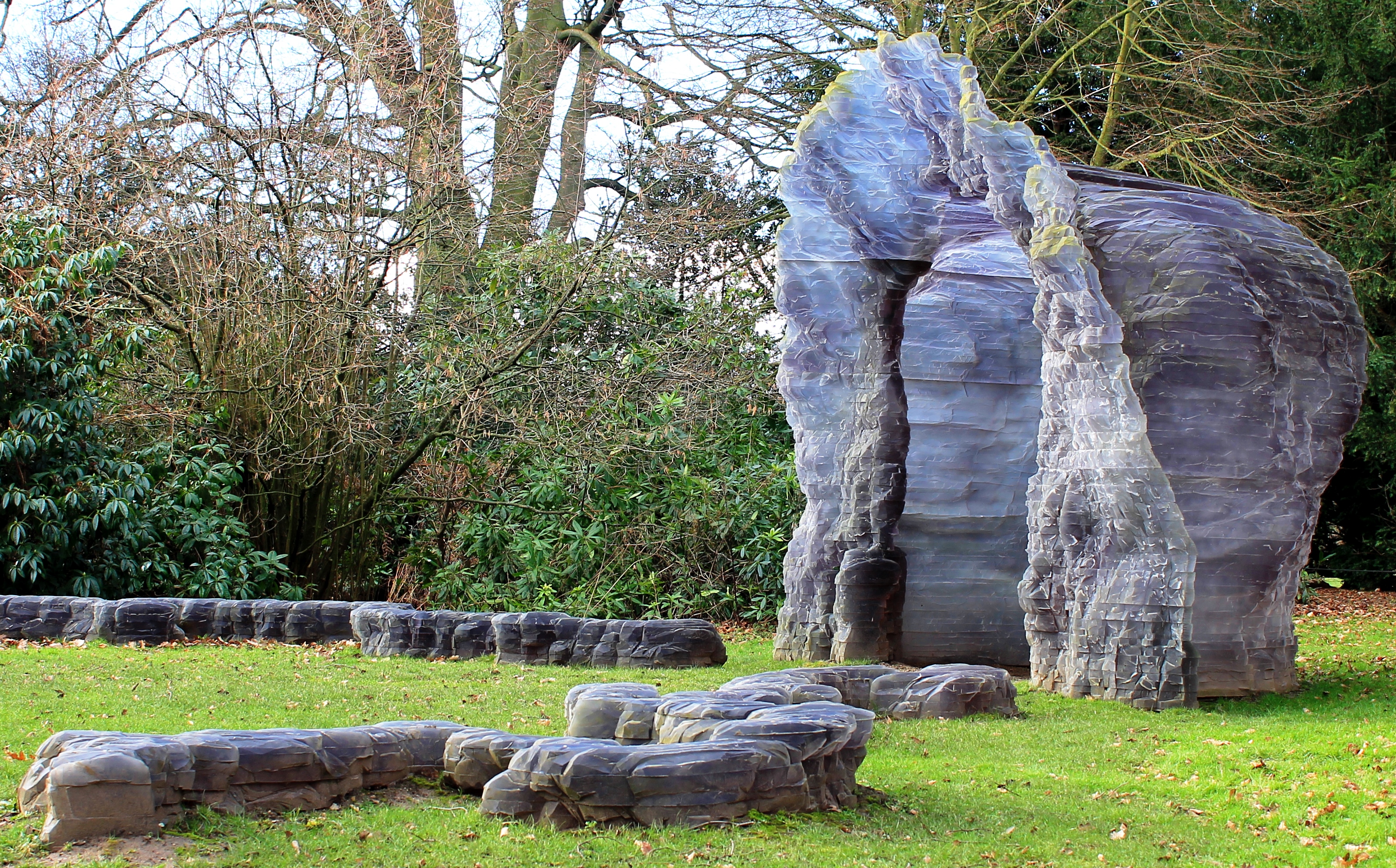 Turning off the road into Yorkshire Sculpture Park, the otherworldliness of the site immediately becomes apparent. The ‘gallery without walls’ is spread over the 500-acre Bretton Estate, a rural park graced by stunning architecture, including the Palladian mansion built in 1720. Nestled in amongst the expansive woodlands and presiding over the lake you’ll find an abundance of contemporary open-air art. Although it would have been impossible to explore the entire park during the short time I had there, the sample I did see manifested an enchanting array of innovative ideas and artistic concepts… 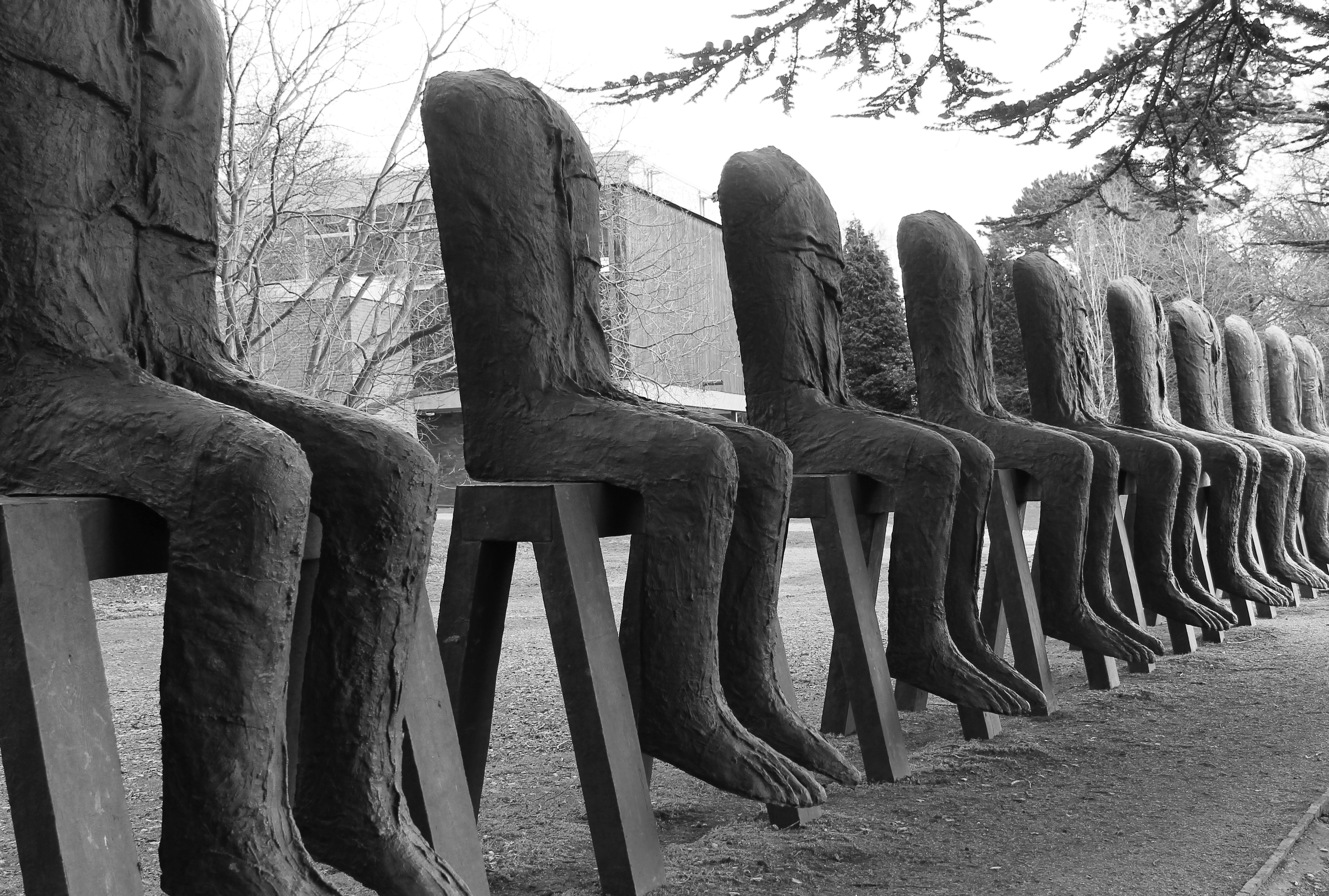 Magdalena Abakanowicz’s striking piece Ten Seated Figures, at a glance, appears to incarnate a council or panel; the aura of the piece is certainly authoritarian, echoing the Decalogue. Take a step closer, though, and the Polish artist’s figures take on a more ominous presence. The scale of Abakanowicz’s work reflects her desire to create art as ‘a form of existence’, and indeed the seated figures have a level of bearing in the space they occupy. Whilst from afar they appear uniform, and almost completely identical, the rough casting of iron noticed upon a closer look invites visitors to observe the differences between each seated form of the sculpture. On a plaque detailing information on the piece, Abakanowicz is quoted as wanting to ‘bewitch the crowd’, and indeed the sense of ambiguity surrounding the work draws many of the park’s visitors towards it. The sense of formality from the alignment of the figures evokes a sense of threat, and even fear, in the viewer. The work follows on from a previous project of the artist’s, ‘Abakans’, which concerns itself primarily with crowds and a sense of aggression that is evidently still prevalent in some of her large-scale sculpture work today. 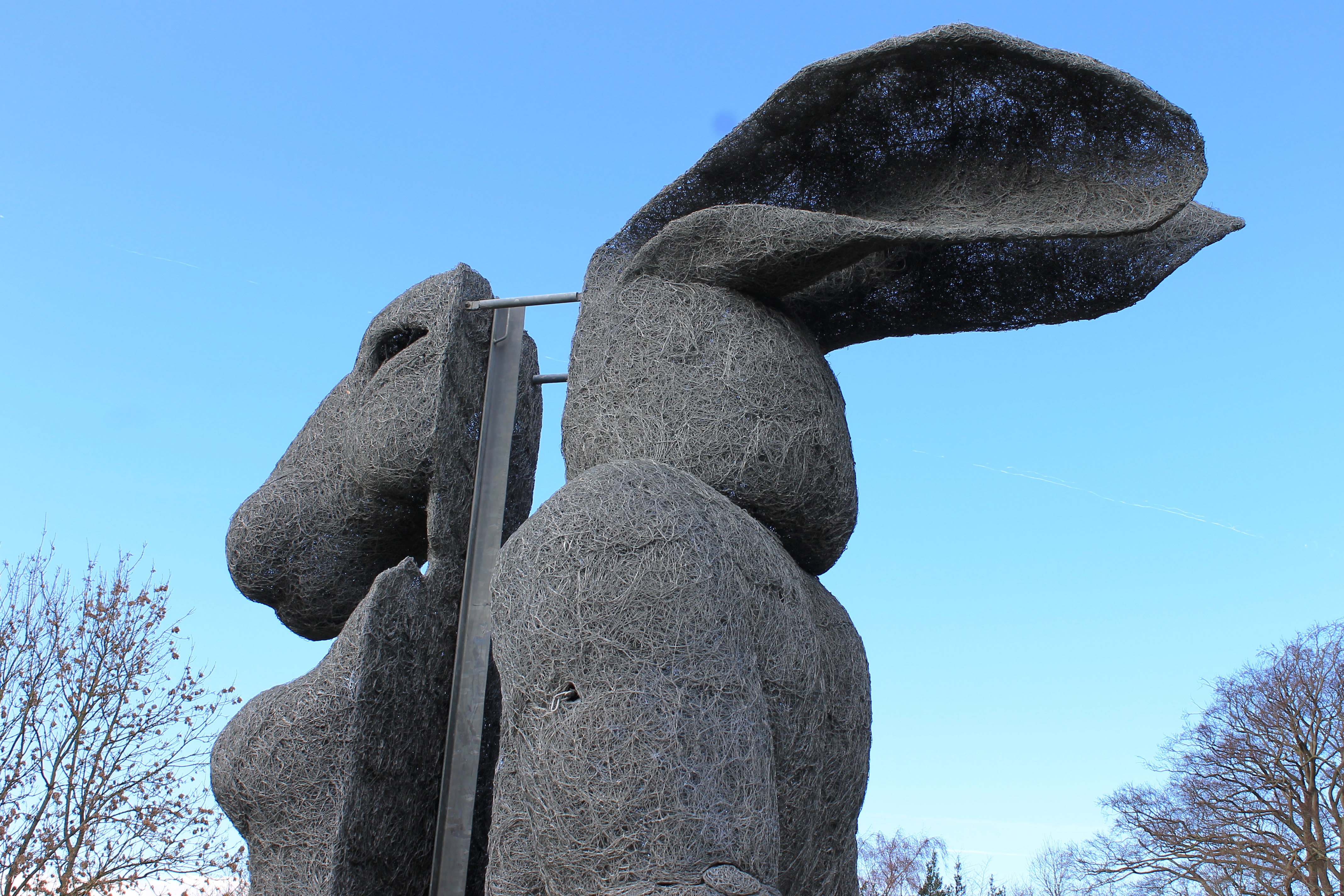 To turn away from Abakanowicz’s work is to be confronted almost immediately with Sophie Ryder’s reflective sculpture, Sitting. Her anthropomorphic figure sits facing out towards the expanses of art and nature across the park. With the body of a woman and the head of a hare, the work embodies the complexities of emotion and the human condition. Ryder’s choice to work with wire for this piece is perhaps responsible for its intricate nature, and goes some way towards expressing her belief in emotion as a facet of all living creatures. The powerful yet contemplative pose of the figure is somewhat disturbed by the fissure running down the middle of the sculpture, exposing the hollow insides of the ‘Lady-Hare’. This feature remains unexplained; whether it has symbolic meaning, or is a structural design for a different purpose, the sculpture remains largely open to interpretation. Further from the YSL Centre, placed alongside the lake, stands Sol LeWitt’s 123454321, the concept of which I found particularly interesting. LeWitt identifies that ‘the system is the work of art; the visual work of art is the proof of the system,’ and his aptly-named piece reflects this theory completely. The sculpture is comprised by a set of cubes, which increase in size by one brick width-ways and two bricks length-ways – a ratio of 1:1:2 – before declining in size again. Clearly, the mathematical and structural planning behind the work is the beauty of the piece; the ability for logic and numbers to create order and near perfection is the ‘work of art’ to which LeWitt alludes. At first, the structure seems unnatural in relation to its surroundings, but the accompanying description highlights mathematics’ foundation in natural patterns, including the detail in the formation of trees. Regrettably, 123454321 is LeWitt’s only sculpture in any public landscape space in Britain; more of his structures can, however, be found in the Tate Modern in London. 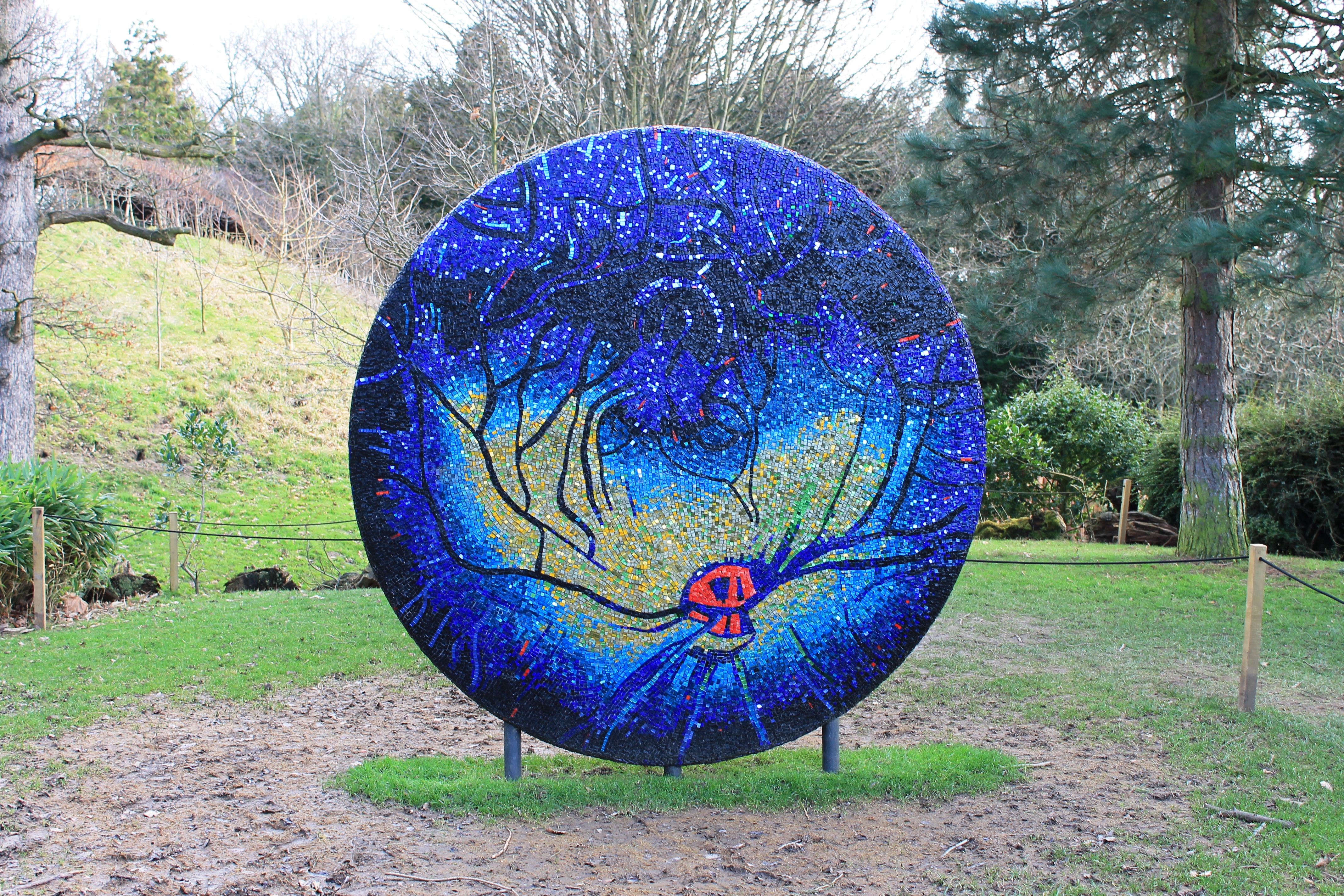 Marialuisa Tadei’s colourful sculptures, Night and Day and Octopus, stand out amongst many others due to the ethereal nature of the works. Using mosaic, the pieces appear almost technological in character against the natural setting of the park. It is clear that they would look extraordinary in sunny weather; they are decorated with coloured glass and with the movement of light, as the accompanying information reads, radiate an almost mystical energy. One feels as though the pieces were created in order to cross boundaries, and indeed there is an otherworldliness to the art forms that gives a sense of being both tangible and spiritual. The artist, in many ways, transforms the ancient technique into a contemporary creative interpretation of the modern age by recreating a ‘pixelated’ image in three dimensions. I find that I rarely see contemporary mosaic pieces in the art galleries I have been to; it was exciting, therefore, to see two fine examples of the medium together with insightful explanations of Tadei’s motives.

Dennis Oppenheim’s curious exhibition Trees: From Alternative Landscape Components was perhaps one of the most outstanding works in the park. Walking away from the lakeside towards them, the trees appear almost eerie – leafless, metallic structures standing together in an open park. In reality, though, they are thoughtful, unique displays of artwork that address the relationship between artificial and natural materials. At the end of each ‘branch’ is a household artefact, and no two trees are the same. Dog kennels, toilets, dustbins and pieces of fence are amongst a large number of items that constitute this artificial landscape; a visitor to the museum is confronted with the concept of synthetic nature in an estate that prides itself upon its rural surroundings.

I did not manage to view the whole of Yorkshire Sculpture Park because of the sheer expanse of its grounds and the wealth of artwork available. Spend a whole day there, if possible, to allow time to explore the grounds and the artwork without being pressed for time. The site holds sculptures for everyone: the pieces mentioned in this article are but a small representation of the variety in the park. Experimental pieces such Julian Opie’s electronic piece, Galloping Horse, and Peter Liversidge’s realised proposal, Everything is Connected, stand alongside the work of more well-known artists like Antony Gormley and Barbara Hepworth. The area of the park I was privileged enough to see was a hub of creative investigation which charmed and rendered pensive the inquisitive visitors; I would highly recommend paying a visit.