A Hidden Gem in Barcelona 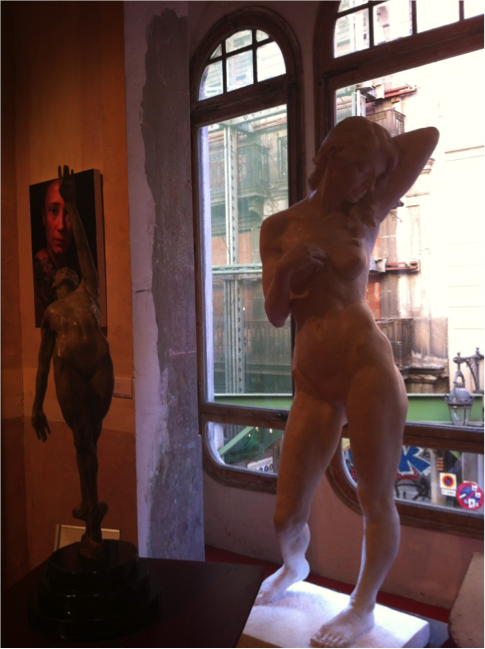 Sculptures on display at the MEAM

Stepping away from the bustle on the streets of Barcelona during a trip away this summer, a friend and I found ourselves exploring the wonders of a true hidden gem. In what seemed like the most unassuming little museum, tucked away as it was in its own quiet corner, we found ourselves on an incredible artistic journey. We must not have been more than 20 metres from the building queues and snap-happy tourists piling into the world-famous Picasso museum just a few streets over, but we were immersed in a different world here at the European Museum of Modern Art (MEAM)

Of course we were two among those tourists for the most part, with our iPhones at the ready, determined to document all of our favourite works as we browsed the exhibition rooms one by one. We had also been those tourists in the visits to national museums, La Sagrada Familia and even a brief wander around Park Guell, Gaudi’s famous recreation of a 20th Century English park. These attractions, though historical masterpieces and magnificent in their own right, didn’t seem to have the same freshness and balance as the MEAM with its appeal both to the modern palette, and to the traditional, which its wonderful setting allows.

The history of the museum building dates back to the 1790s, and it appears that almost all of the original features of its interior from this era,when the building used to be an old palace, remain intact. Its collections now are solely dedicated to modern and contemporary artworks, and the galleries have since become the headquarters for the Foundation of the Arts and the Artists, exhibiting painting and sculpture from 50 different countries, keeping the ongoing range of displays varied and unique.

The cutting- edge talents punctuating the museum walls and presented on imposing plinths along its grand corridors are works hardly to be seen anywhere else, as their origins span the globe. The museum’s growing alliances with The Representational Art Conference, California, the Florence Academy of Art and, of course, Barcelona’s own Academy of Art ensures the museum retains its wealth of talent and diversity. It is the stress on the figurative which becomes the museum’s trademark at Gomis Palace, leading to a defined belief in the contemporary, as identified by experiment and abstraction, creating a deeply original, ever-shifting collection of works, one which I would recommend to anyone planning a trip away to the jewel of Catalonia anytime soon.