As student journalists, we often fall into the trap of recycling the same perspectives again and again; it’s easy to do, surrounded by such a large community with so much in common. The story of the student artist, the small business owner, and the college scandal are all important in their own way, but we might find new wisdom in those untold stories that hide right in our blind spot, in the people we walk past on the street, or those we meet briefly through family and friends. That is the kind of story I want to share today.

Sheila Cunningham has been an amateur artist on and off throughout her life, and up until around 20 years ago she rarely found the time to relax and focus on painting. As a child she was a keen scribbler and doodler, surrounded by a sister and father who likewise loved art, but as the pressures of everyday life grew her creativity was forced to take a back seat. Around 20 years ago, she says, she took a sudden interest in looking at art, as the intensity of her working life began to slow down. Then, 10 years ago, she began to experiment in creating art for herself, and joined the Bob Jest Art Group in which to do so.

As an artist, Sheila does not like to singularly define her style. She is constantly looking for new ways to develop and experiment, in medium and form. Having started with watercolour, she soon moved into the more animate and vibrant world of acrylic painting, and has experimented with landscapes, abstract art, sky paintings, portraits, and animals. ‘Skies have always fascinated me because they are never ever the same’ she tells me excitedly, though her passion for colour has drawn her towards a variety of subjects. Inspirationally, she does not allow herself to ‘settle’ into a single way of being creative, but is described to ‘zig where others zag’, always challenging herself and her art in new ways. ‘Poppies’ by Sheila Cunningham, included with permission of the artist. ‘Autumn’ by Sheila Cunningham, included with permission of the artist.

After a period of struggling to transpose the vision in her mind onto the page, she describes a kind of ‘lightbulb’ moment after painting ‘Thirsty Tiger’, finally seeing the likeness she was hoping for. Not only did it capture her vision, but it took on a vibrant life of its own that she was not expecting. The soft depth of the watercolour pencils perfectly depicts the fur of the tiger, while its eyes gaze intently past us as viewers, almost willing us to look over our shoulders. Another early work that captured the likeness Sheila was looking for was her portrait ‘Einstein’, which again uses pencil, in this case to create a textured, somewhat photographic effect. 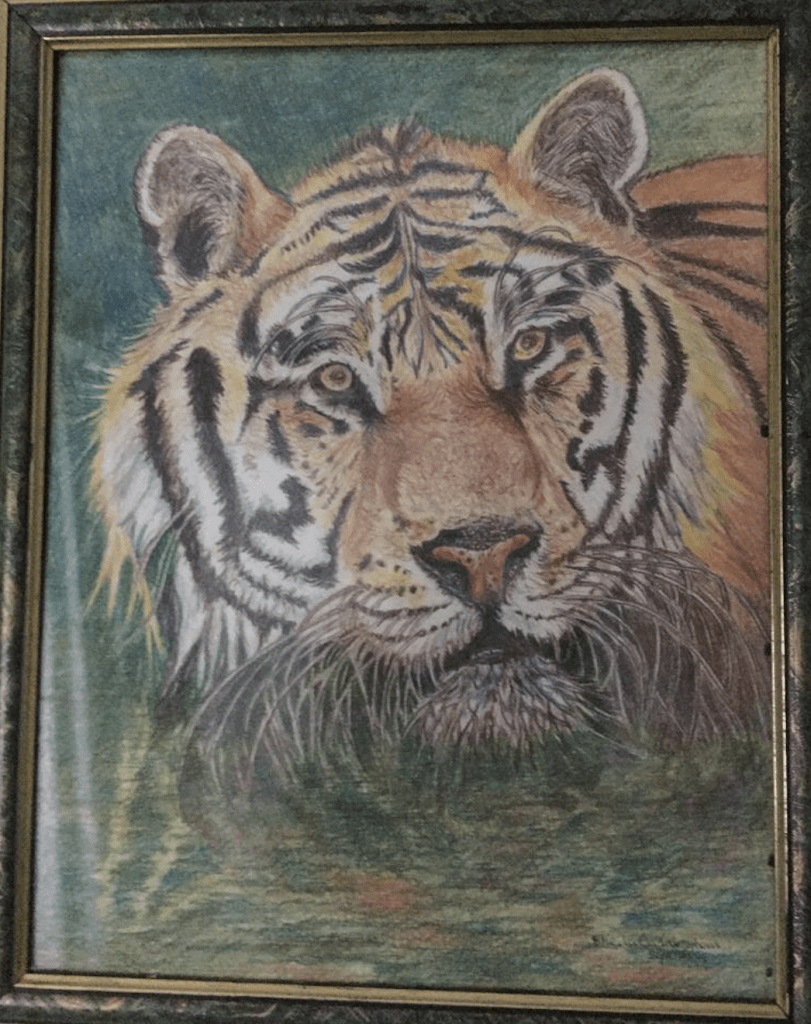 ‘Thirsty Tiger’ by Sheila Cunningham, included with permission of the artist. ‘Einstein’ by Sheila Cunningham, included with permission of the artist.

Casually dropping little nuggets of wisdom, Sheila told me that often, art and creativity spawns in unexpected places. In difficult times, she found she could not do art as her headspace wouldn’t allow it, while for other people the reverse was true. Her time living in the South of France, for example, was one of her least productive artistic periods, but nestled away in her home in Thetford has inspired her to create art regularly again. Art doesn’t always happen where, when, or why you expect it to. While she humbly tells me that ‘we are all students’, and she feels both University students and retirees are on a level plane of learning, her words echo with her years of experience in the art world. ‘Holiday in Barcelona’ by Sheila Cunningham, included with permission of the artist.

So what advice might Sheila, with many years of life and art in the bag, give to us as people just embarking on our creative (or non-creative with a side of it!) careers? Well, first up I should change my vocabulary: when I asked Sheila about the connectivity that comes from art, she said ‘What you’re describing is life’. The key to finding yourself creatively is taking time to find and know yourself, to understand your life so far and think about what’s ahead. If you don’t enjoy art or creativity, don’t push it. But if you’ve at times thought ‘I’d love to be able to do that’, you will be able to. ‘Walkies’ by Sheila Cunningham, included with permission of the artist.

Sheila recognised that as a young person, she spent a lot of time focusing on the needs of others, as many of us still do today. Whether it’s running a society, getting that essay to your professor asap, replying to your friend or sending a birthday card home, life can get overwhelming when we constantly focus on the needs of others. Taking some time to be introspective might just be the key to unlocking that creative box inside.

I couldn’t, of course, do an interview without getting a little political. When asked about the government’s ‘retrain’ attitude, in which campaigns were released encouraging artists/people working in the arts to retrain in line with STEM or computing subjects, Sheila was pretty straightforward: ‘you can’t get a bird to bark’ or ‘get a cat learn to fly’. She emphasised that each of our artistic creativity is built into us, and treating people like programmable robots was a dangerous way attitude to have. Without pursuing what we enjoy and are naturally inclined to, she suggested, we will stagnate creatively and in livelihood. On a more lighthearted note, she pointed out that ‘If artists become scientists who is going to design the PM’s next wallpaper?’; would he really be able to cope if Lulu Lytle went ‘cyber’?

Instead, Sheila hopes that the differences between people, young and old, STEM or humanities orientated, might be conducive of new and exciting kinds of art (and ways of living). The spaces where opinions converge are the centre-point of new creative thought, a place that challenges the ideas each of us have about what should or could be.

I’m grateful to have been able to share Sheila’s art journey and what she’s learnt through her 70 years of creativity, and hope it will help readers to think outside of Durham’s box and its students’ art. By learning from those who are different from us, we might reach new and unexplored mediums, styles, techniques, and methods of art.