The Worst Lecture Ever 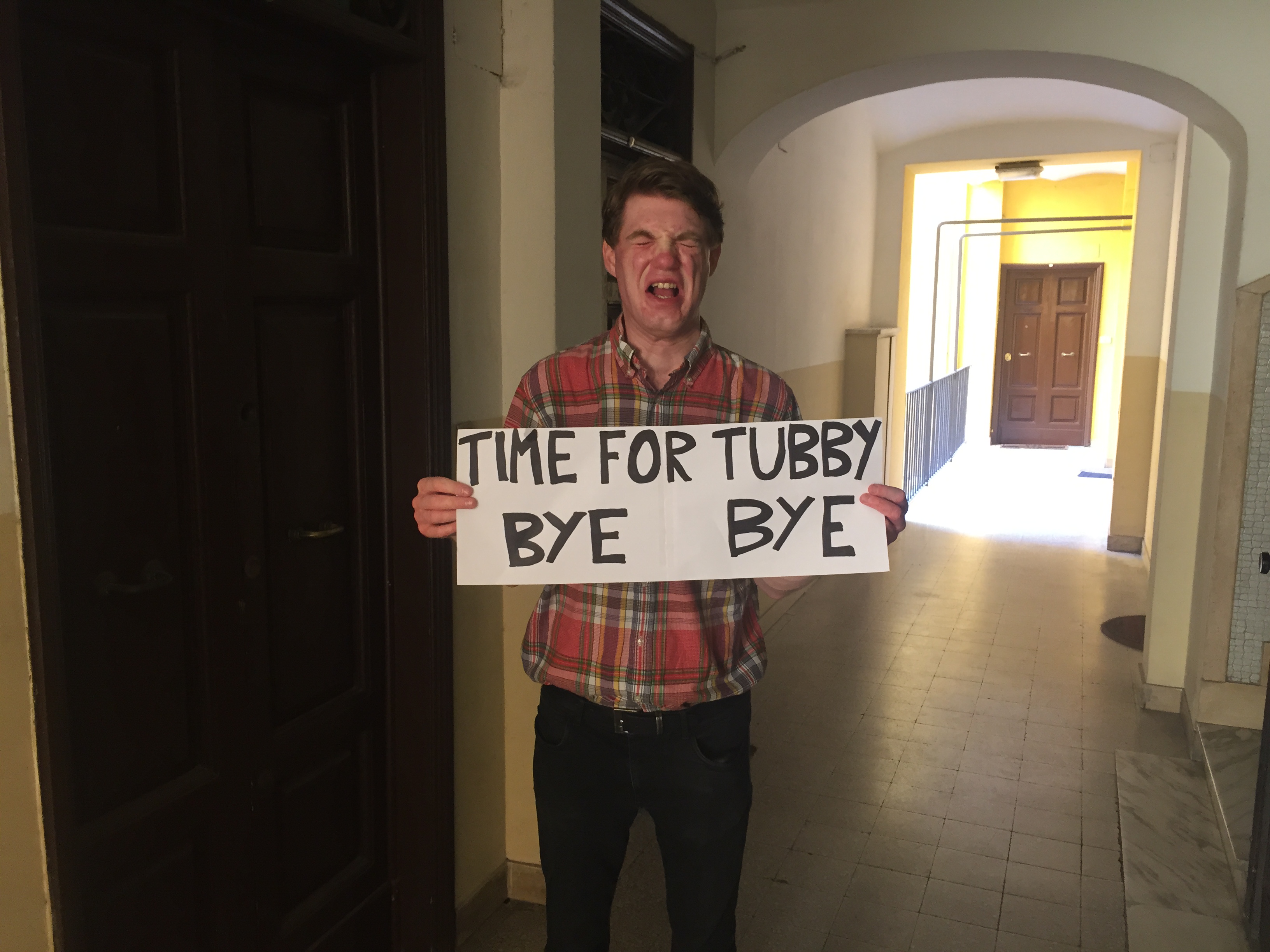 I can’t turn up at Gatwick looking like this!

Now, you might be interested to know that, whilst this article is the last in the series, it was actually one of the first I wrote. The reason for the delay was that I didn’t want to post it until I was certain I would have left Sapienza by then, just in case they tried to have me whacked for disrespecting a senior member of the Italian establishment.

I have lectures with a professor, who for the purposes of this article, I shall refer to as ‘Vito Corleone’. These lectures last two and a half hours in mid-evening, and so I am definitely at my most alert after a full day of work. What makes it even more super-awesome is that these lectures are on a completely different campus to all my other ones. I therefore have to bundle out of my preceding lecture and sprint across half of Rome to arrive breathless, red-faced, and – for all my efforts – late. The ‘lecture hall’ is somewhere between a bungalow and a tent; it reminds me of one of those marquees Jocasta and Sebastian’s parents might hire out to celebrate their 35th wedding anniversary or something. It is also often the case that there aren’t enough seats for everyone, and, being British, I don’t have the sharpest elbows in the world. In consequence, I just sit on the floor at the back, barely able to see the top of Vito’s head, which bobs in and out of view like the Sun in Teletubbies.

Vito himself is quite the character. I would compare the standard Italian teaching style to a river in the Welsh valleys: slow, meandering, and fairly aimless, but in a tranquil sort of way. They will turn up and spend upwards of two hours – sometimes four hours without breaks, I kid you not – discussing a certain topic. Whereas a British lecturer might discuss Horace’s writing style, an Italian would discuss his potential lovers, where he lived, what he liked for breakfast – you get the idea. A bit like a BBC 4 documentary with dwindling ratings.

Indeed, Vito stands in direct contrast to this. He possesses great energy and charisma, but, instead of focusing on the topic at hand, spends much of his time making jokes for the amusement of the class. You know how in lectures there’s always that one annoying miscreant at the back who thinks he’s God’s gift to banter? Well, imagine he’s thirty years older, at the front of the class, lecturing to a large group of Italian students. He frequently interrupts his own train of thought with some pop-culture reference. I have seen him sing the whole theme to ‘20th Century Fox’, an experience that lasted 20 seconds or so. Another time, he did an impression of Sean Connery’s “Bond, James Bond”, in what I must concede was a very accurate lisping Scottish accent. Most memorable, though, was when halfway through his spiel about something (that was probably irrelevant), a girl shouted something from the back, really loudly and really rudely. Immediately, he fired back with the chastening “Scusami, Signorina Cazzosissima”, which would roughly translate to “Excuse me, Little Miss Full-of-cocks” (incidentally, surely one of the rejected characters from the Mr. Men series?). The crowd whooped and cheered. I just sat there bemused, wondering what FemSoc would make of him. He’s a bit like Marmite: oily and opaque.

On one occasion, it had been raining. Not the “Oh no, it’s raining, better take an umbrella” kind – the “Oh no, it’s raining, better build an ark” kind. As a result, one could say I arrived from my early-evening dash more than a little damp (the Italians say inzuppato, literally, ‘dunked in soup’), and just in time to see Vito fumbling with the projector. It transpired that he wanted us undergraduates to spend the entire two and a half hours watching a video. It was like a throwback to Year 9 history – indeed, ever since, I’ve half expected him to bring along some pastel crayons and recreate geography as well. Unfortunately the sound of the rain on the tent canvas was so immense that we could hardly hear the person next to us speak; let alone the actor masquerading as Socrates. Clearly dismayed that the heavens had frowned on his plans so rudely, Vito decided to postpone this lecture, instead tackling another part of the course in the allotted time. He sent two students forthwith to scout out another lecture hall (one that didn’t sound like the inside of a cosmic snare drum). In the meantime, he kept the room entertained by bellowing out a story of how he helped push a morbidly obese woman through the double doors of a gym – I never realized he was such a good Samaritan. This lasted 14 minutes, 39 seconds. I know this because I counted.

Finally, the two scouts returned, drenched, but triumphant. Vito broke off from his story, much to the disappointment of all of us – but was a run-up going to shove her loose? – and shepherded us to another room. Scraping of chairs mixed with the rat-a-tat-tat of the rain, as 250 tired and disinterested students traipsed out of the pseudo-wigwam and into the main building. Our new lecture hall was small. So small that there was standing room only, and so the entire class piled in like sardines. Standing shoulder to shoulder, it would be a miracle if any of us were going to be able to take notes – I’d been on rush hour metros less crowded that this. Vito took one look at the seething mass of students, before shouting “Another room!”. With a stifled cheer, we then all followed his lead as he strode past the protesting porters into the main auditorium. What had started out as a lecture had become a mob. I was now at the front of the crowd and so sat directly in the centre, several rows from the front, allowing for the best view and sound quality.

Almost as soon as we resumed the lecture, the fire bell went off. However, Vito, who was at the end of his tether, was having none of it. Therefore, he just shouted over the top of it all: the ringing, students’ concerned murmurings, and the panicked cries of the porters as they ran up and down outside the hall. Eventually, the racket stopped. Evidently it had been a false alarm, thank God – I think Vito would have sooner burnt than change rooms a third time.

My opportune location, however, came back to bite me, for, whilst giving me a good view of Vito, it also gave him an excellent view of me. It is no secret that I haven’t quite embraced the Italian sense of style, and so that, together with my pasty white skin, was something of a giveaway that I was not from around here. Vito therefore took it upon himself, after delivering an extended monologue of complex information, to turn directly to me and speak in English. Immediately, 250 pairs of eyes swivelled round to look at the stupid Erasmus student in the centre of the room. I would just nod sheepishly and pretend I understood what the hell he was on about. Then, five minutes later, the same again, and, like he was commanding them through telepathy, all the students turned to look at me. Indeed, it happened with such regularity that it became impossible for me to switch off, as one can do in a difficult or uninteresting lecture, and I was constantly on edge, braced for the next mass-scrutiny. Perhaps I would have been better disposed to this procedure if it had been helpful, but all he would tell me was the last three or four words that he had said in Italian. Breaking off from his continuous stream of prose, he would cryptically inform me that “humanity needs to think”, or “we need a clock”. Believe me, Vito – I’ve been keeping an eye on the time since the start of your sorry anecdote two classrooms ago.

And speaking of time, Vito’s unfathomable ability to be the Godfather of the endless anecdote brings me to the end of my Erasmus year in Rome. And I never did find a horse’s head in my bed.