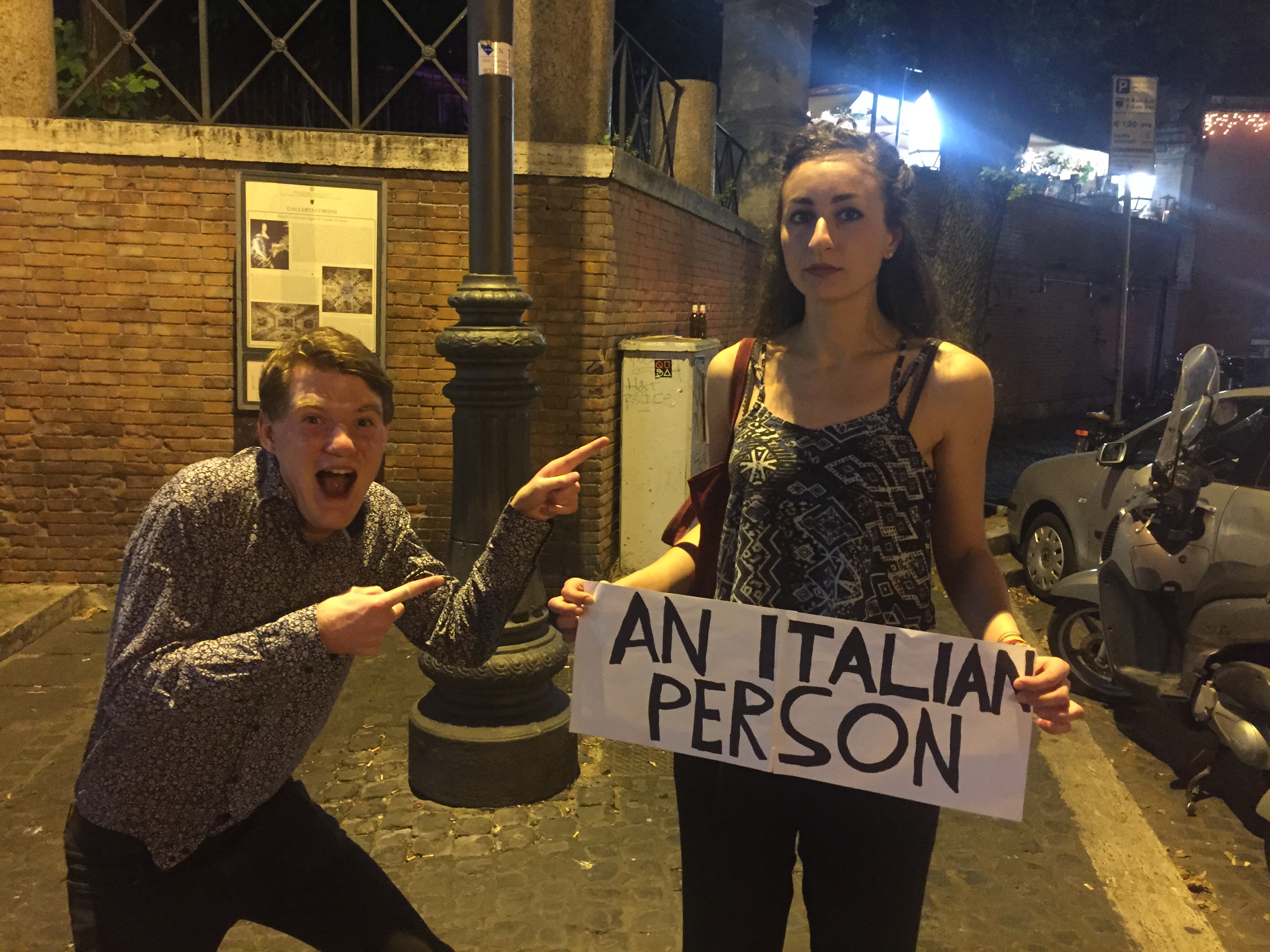 So after a series of articles that were essentially a tirade on Italian custom, I think it is only right that I talk about its people. I remember when I was first considering where to go for Erasmus, an Italian friend told me “Rome’s fabulous (of course) and sunnier and the people are much more expressive/fun/infuriating” – and he could not have been more right. Indeed, I would say that the Italian people are by far the best thing about Italy: they are friendly, laugh easily, and are just as eccentric as any other people. This article is a humble collection of some of the many traits that I found most amazing about its people.

Now, after nearly a year of living in Italy, you would be forgiven for thinking that I speak Italian. True, my Italian has improved (I mean, it was kind of impossible for it to get any worse), and I have now reached the point where I’m clearly not a tourist, but I’m not a local either, which sometimes confuses Italians I’m speaking to. The way I got around this is to learn a large number of stock phrases which I can now rattle off pretty well now. Particular favourites are mi dispiace ma non posso parlare italiano (I’m sorry, but I can’t speak Italian) and scusami, il mio italiano è molto cattivo (Excuse me, my Italian is really villainous). At this point the Italian in question invariably laughs, thinking I’m being modest, before launching into some impenetrable dialogue about something or other, which I can’t follow at all. I’m always reminded of that guy in Family Guy who only speaks two sentences in English: one saying he can’t speak English, and other explaining he only speaks two sentences, including that one. I can imagine it must be really quite puzzling for them.

It wasn’t always like this, though – in the early days, let’s just say that every time I had a conversation, Dante Alighieri would be spinning in his grave so quickly you could attach a motor to his corpse and power half of Florence. My sentences were plagued with grammar mistakes, poor wording, and seemingly endless pauses, as I groped for a word – any word – that would at least resemble in part what I was trying to convey. That said, in my time I did fall foul of a few truly spectacular linguistic blunders. There was the one time I mixed up ‘andiamo scopare’ (let’s sweep it up) with ‘andiamo scoppiare’ (let’s go shagging), which really confused the poor girl who had broken the glass, I can tell you. As I’m sure you can imagine, it remains a source of almost boundless amusement both for me and – especially – for my Italian companions.

The incident that will forever stay in my mind when I think of my troubles with the Italian language, was in my first week in Rome. I had gone to the disability department to get a reference from a certain Doctor Caiazzo to assure Sapienza that I was dyspraxic (and not just stupid). However, when the nice lady behind the desk asked for her name I said (in Italian) ‘the doctor is Caiazzo’, but mispronounced it as ‘cazzo’. Silence suddenly fell across the room, as they all turned and looked at me. Without breaking eye contact, the receptionist picked up the phone and wordlessly dialed the number. It later transpired that ‘cazzo’ is the rudest word in the Italian language, and that when they asked for the doctor’s name, I had inadvertently replied ‘the doctor’s a fuckwit’. All a learning experience, I suppose.

The British have a tendency to deliver jokes in quite a sarcastic and deadpan manner. Now, this style, made famous by Monty Python and the like, is known across the world by the fairly self-explanatory title of ‘British humour’. The good news is that Italians enter a conversation with me expecting me to be funny, making it much easier to make them laugh – the very fact I’m British means I’m someone whose jokes are worth listening to. Some of you might disagree on that one. The only problem is that Italians sometimes have a hard time deciphering the difference between deadpan humour and a serious comment. At a party, a German once bid farewell to me with “well, it was horrible to see you”. “No!” they cried, rallying round me with sympathetic outrage, “don’t listen to him Hal – he’s just a stronzone (a massive arsehole)”.

A thing that is inexplicably popular among the Italian people is the portable earphone headset. Now, don’t get me wrong, I understand its purpose – to free up both hands for everyday tasks, the performance of which would be considerably more challenging without. Except that the only time I would ever need both hands at once is when I’m in the house, probably transferring hot – though poorly tasting – food from one receptacle to another. Italian people, however, only ever wear this instrument when they are out and about: exactly the time, I would argue, when you would never need both your hands at once (except perhaps when packing groceries, in which case why would you be on the phone at the same time as talking to the cashier, you aloof twit?). Clearly, though, the headset does fulfill some key purpose in these Italians’ lives, or else they wouldn’t have purchased the damn thing. You’ll be pleased to know, though, that I have since discovered the reason for this odd personal investment: gesticulation, upon which they place an almost impossible importance. Rather than us, who use it to summarise or illustrate a point we are making, the Italians use it to augment their conversations, expressing joy, sadness, or anger – I once saw two motorists having an argument in almost total Italian sign-language. Put it this way – calibrating a Nintendo Wii for an Italian person must be an absolute nightmare. The result is that, whilst walking through certain well-to-do areas of Rome, you are almost constantly surrounded by yuppies kitted out with these headsets, who walk down the street talking enthusiastically to themselves, whilst gesticulating wildly to their all-too-absent audience. It was like an Italian-dubbed version of One Flew Over The Cuckoo’s Nest.