As a student in Durham, a trip to Tesco on the Bailey is rather inevitable. As a student, it is also natural to be drawn to the highly nutritional, energy-providing, brightly coloured section of Tesco that is the Pick and Mix aisle, or, as they affectionately call it, the “Pick’n’Mix” zone. So you can imagine our dismay when during our perusal, what appears a trivial thing disturbed our picking and mixing experience. To me, the presence of both a “medium” size and an “extra-large” cup, and indeed the apparent lack of understanding as to the meaning of the word “medium” was deeply perturbing.

Being of a somewhat pernickety and easily annoyed disposition, I naturally questioned how it was possible to have a “medium” of two cup sizes. A medium should of course be used to distinguish an average between “small” and “large”, it should not be used as a counterpart to “Extra Large”.

In fact, on this point, the affix “extra” implies that the size of something is indeed greater than the size on its own. But in this case the “Extra” is effectively redundant. We cannot ascertain for certain that the extra large has a greater capacity than the as yet unidentified, possibly imaginary “large” cup.

These errors are annoying, yet trivial. I would propose that Pick’n’Mix vending stations utilise the terms “Smaller” and “Larger” when only two cup sizes are present, and only use a “medium” as an average of three sizes. Moreover, “Extra” should really only be used in the presence of a large cup, from which to take reference of capacity, in order that the “extra”ness of the extra large size be quantifiable.

The conditions in which different sizes of cups should be used may seem yet again trivial, however it is not a purely confectionery problem. Coffee houses too use unconventional sizes to express what could quite easily be determined in a simple manner. Why should we have to half attempt an Italian accent every time we wish to purchase a caffeinated beverage? If one does not speak Italian, how is one to know how big the cup will be on receipt of said beverage?

Costa coffee houses are particularly criminal of this. I have also noted other independent cafes copying the trend, no doubt in an attempt to make themselves seem more desirable than big coffee brands, and to follow the coffee drinking trends of today. In my view, one should not need to offer bilingualism as a skill at a cafe simply to order your favourite cup of coffee.

In fact, one thing that particularly bothers me is that even when English is used, the terms still bear little resemblance to the final presentation of said drink. At Starbucks, the term “tall” is used in conjunction with Italian terms “grande” (meaning “big”) and “venti” (meaning “twenty”). These terms, however, are also confusing, but for those not gifted with the Italian language, misuse is forgivable.

“Tall”, however presents many issues itself. Will the cup be simply a taller version of a normal coffee, but contain the same amount in volume, with the length of cylinder of cup extended to accommodate the new declared height of the cup? Or instead, will the cafe prefer to raise the cup to a different height, perhaps through the use of a cup with a stem, creating in essence a regular cup of coffee raised to a new height?

After ordering a “tall” coffee, one discovers that the coffee is not even “regular” or indeed “medium” sized, but is rather disappointingly small. The existence of a wikiHow page on “How to Order Coffee” confirms my worst suspicions -that things are becoming increasingly complicated in fields where life is relatively simple. The mere existence of this guide is, if not sad, then disturbing; though well worth a read. The fact that coffee cup sizes differ from cafe to cafe, brand to brand is another point of contention.

The sizes of drinks and food in the commercial sector are an area of at least lukewarm debate. The introduction of the “Blitz Box” by McDonald’s in Kansas City on the 2nd of December was another step towards the return of “supersizing”. It contains two burgers, ten chicken nuggets and two medium portion of fries at only 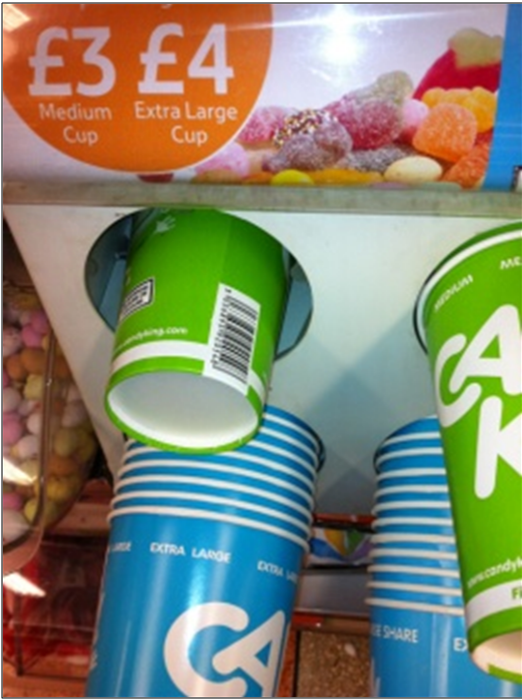 14.99 (approx. £9.40) and at 2,940 calories is equivalent to 118% of the recommended intake for men, and 147% of a woman’s recommended intake. Designed for two persons, a ravenous individual could quite easily devour the lot if they so desired. The lack of regulation on the consumption of a single individual means that the habitual fast-food eaters are becoming fatter faster. There is nothing to stop one person from buying and eating an entire Bargain Bucket at KFC or a Blitz Box, both of which are designed for sharing.

However difficult it may be to regulate the consumption of individuals, one can’t help wondering if the health of the customer should not somehow be the responsibility of the brand. After all, no-one would buy their food if it was advertised as an accumulation of calories and fat rather than a burger. I may be being too harsh however; many chains have cleaned up their act by reducing the amount of trans-fats in their meals. On a visit to Colorado, I discovered that French Fries had been replaced by baked potato wedges in McDonald’s, showing a willingness to improve the quality and content of the food served.

Despite this transition, it is undeniable that some fast-food restaurants’ food portion sizes are simply too big. When a large cup of lemonade is asked for in Colorado, a bucket is produced, full to the brim of sugary yet sour juice. Starbucks should not have to be a confusing experience, and indeed I feel that the size of cup has little real impact on the health of the consumer when compared to fast-food. A simple coffee experience is easily attainable, as is a simple Pick’n’Mix. The idea of a sweet aisle where one fills one’s own capacious objects in the place of cups simply to avoid categorization seems to me to be an excellent idea.