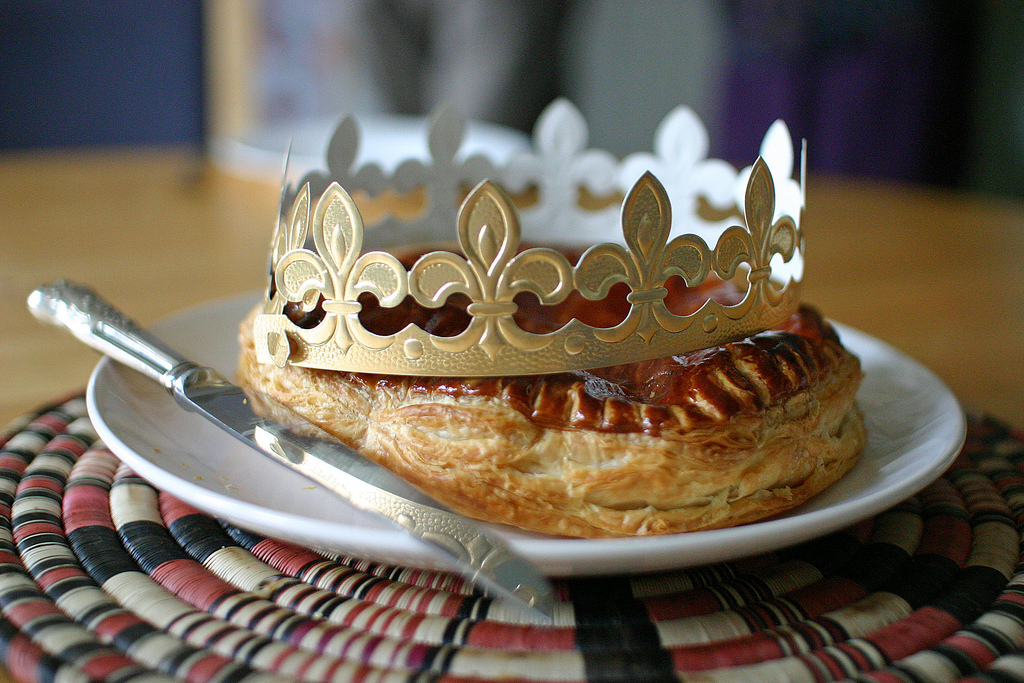 A cake fit for a king

January is a pretty horrible month. It’s still dark, it’s still cold, and it’s nearly a whole year until Christmas. In the midst of lectures and deadlines, it seems an age since you unwrapped those presents and sat down to inhale your calorie intake for the next four months. With what feels like eternity stretching out before Easter, when it will again be acceptable to live on nothing but chocolate, I have been reliving some of the traditional celebrations I experienced during my time in France last year.

The French, it transpires, don’t eat Christmas pudding. Granted, the dessert has a mixed reputation here in England, but can you really imagine Christmas without it? Or without Boxing Day, with its forty-second mince pie of the season, its obligatory “walking off the turkey” march round the block and its Agatha Christie repeats where everyone knows whodunit? Impossible. But like the Christmas pudding, Boxing Day has never made its chocolate-stained, slightly queasy way across the channel.

I cannot pretend to be an expert on Christmas in France, having decided during my year abroad that Christmas at home beat staying alone in a building which resembled a badly-insulated multi-storey carpark within the towering steel gates of an empty secondary school. But honestly, with no Christmas pudding and no Boxing Day, I’m not sure I could have coped anyway.

During the rest of the year, however, I more than made up for not experiencing Christmas à la française. My first taste of a traditional French celebration came on 6th January, when I joined some friends for Epiphany. As I usually spend the beginning of January in a mincemeat-induced stupor, I didn’t really know what to expect from these celebrations, but when I discovered that it all revolved around cake, I decided it would be rude to say no.

The galette des rois, or Kings’ Cake, is a puff-pastry pie filled with almond cream, traditionally eaten on 6th January to celebrate the visit of the magi and the revelation of Jesus as the son of God. The cake itself recalls the Saturnalia festival in ancient Rome, when slaves switched roles with their masters for the day. In many households, a cake was divided between the slaves, and whoever found the hidden bean in their slice was labelled “king of the day”. Today, the “bean” is a plastic or ceramic figurine of anything from a popular film character to a historical monument, the discovery of which – preferably on the spoon and not lodged halfway down the oesophagus – sees the lucky finder crowned King, head regally adorned with a golden cardboard crown.

This rather peculiar tradition is also practised in Italy and parts of Belgium. As with many age-old customs, its origins are not entirely clear. One theory suggests that April Fools’ Day originated when the French king Charles XIV moved New Year from April to January. In France, those who were unaware of the change or who still celebrated New Year in April, under the star sign Pisces, were mocked as “April fish”. A second theory says that in April, the streams were full of young fish which were easily caught and therefore “foolish”. To celebrate this abundance, paper fish were pinned to the backs of unsuspecting friends, who were mocked as “April fish” when they finally noticed. Not awash with subtlety perhaps, but one to try when the old salt-and-sugar-switch has had its day.

Fast forward a month, and 1st May arrives. On this day in the small Sussex town where I live, children garlanded with wild flowers frolic in procession from the castle Gun Garden to the bottom of the high street, where we all gather to watch morris dancers whirling their handkerchiefs to the strains of a local folk band. Living in a town which likes to pretend it’s still the 19th century means I’m certainly not averse to some May Day larks, but to me, such things seemed quintessentially English.

So I was surprised when at the end of a lesson a small boy presented me with a pot-plant, which his smiling teacher identified as “du muguet“. Advanced botany in French isn’t my strong point, and on my walk home I began to wonder what on earth I was carrying. Blending in is difficult at the best of times for a blonde English girl in a small French town, but that afternoon every man, woman or child I encountered seemed magically drawn to me. Complete strangers smiled fondly at me in the street, murmuring “ah, du muguet…“. A small child tugged at his mother’s arm, squeaking “Du muguet, du muguet!” The cashier at the supermarket asked if she could smell it, apparently deeply moved. “Ah yes…du muguet…” she breathed reverently.

Back home, my flatmates asked me what the plant was. “C’est du muguet“, I said knowledgeably to the Spanish and German boys. “I have no idea,” I admitted to my English friends, opening up Google translate. Mystery quickly solved: lily of the valley.

In France, the offering of lily of the valley on 1st May is a tradition which dates from 1561, when Charles IX was given a sprig of the flower. Nowadays, it represents happiness to come. And for those who like to earn a bit of extra cash, the law permits anyone and everyone to sell the flower on the street, free of taxes, as long as they have grown or picked it themselves, for this one day every year.

For me, these were some of my favourite experiences during my time in France, partly because they weren’t things I’d learned about at school or university, but things which I’d stumbled across for myself through living in France and knowing French people. Being part of these celebrations gave me a sense of belonging which can’t be achieved by eating baguettes and watching Amélie. It’s easy to stereotype, but French culture really is about so much more than Napoleon and the imperfect subjunctive. It’s through discovering these ancient traditions, quirky customs and charming peculiarities that you realise that – despite the whiff of garlic and the intense relationship with pastry – the French aren’t all that bad really. And how many people would choose a soggy Christmas pudding over a platter of fresh profiteroles, anyway?