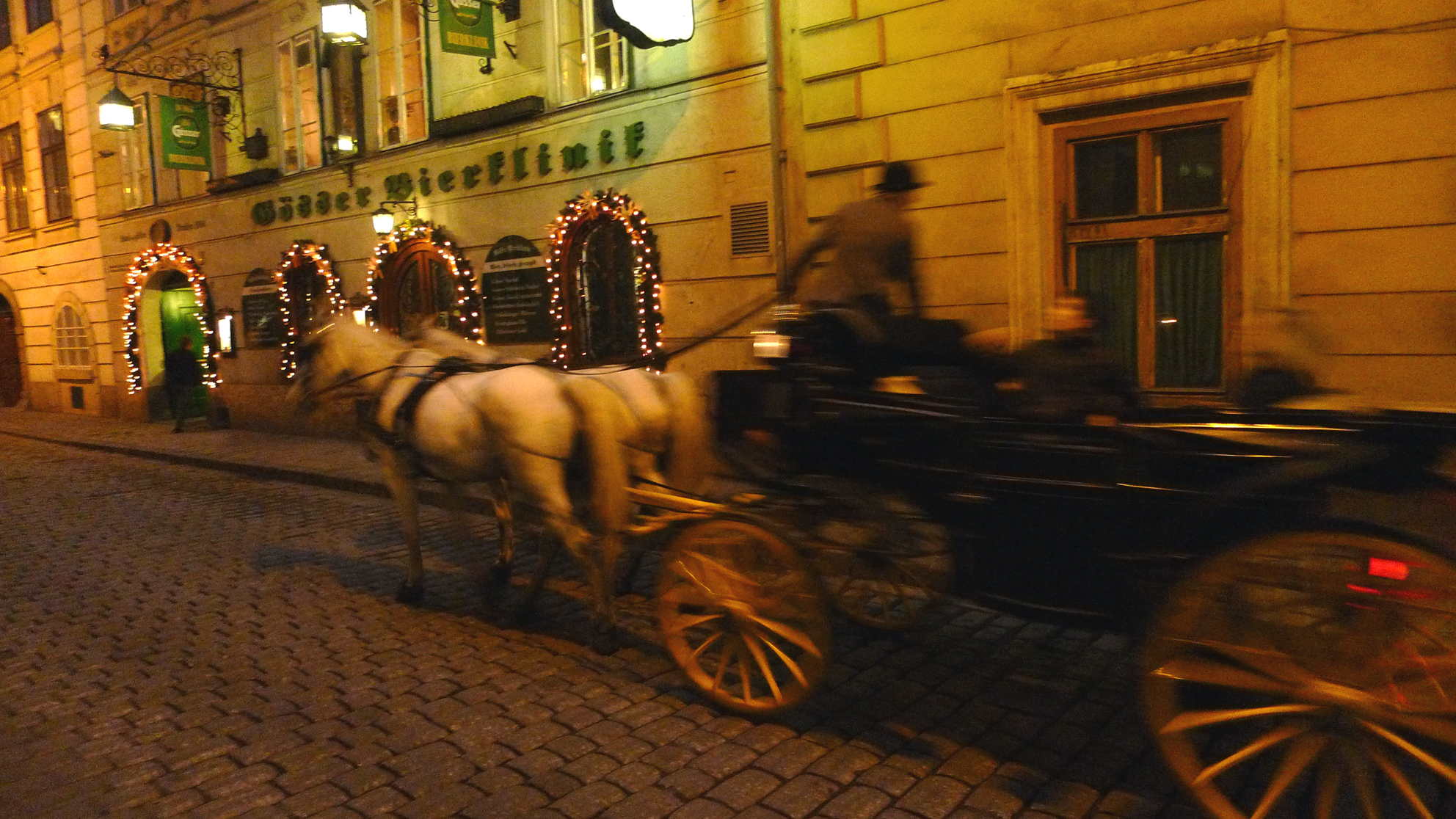 The magic of Vienna by night.

Just half an hour away from Slovakia on the eastern border of Austria, Vienna is a truly beautiful and amazing city with such a rich culture and heritage; even if you’re not a culture- or history-buff, I am sure you would love it! It is the perfect location for a long-weekend away, a little further away than some other cities, but absolutely worth a visit.

The great thing about Vienna is that it is ideal for any time of year. In winter the Christmas Markets (mid-November to Christmas Eve) are really special and similarly, due to its numerous parks (and ice cream shops…), trips in summer, when the temperatures reach 30°C, are ideal. As with most places, autumn and spring are perhaps the best times to go, when the temperatures are warm enough to walk around without a coat, but cool enough to not be hot.

Austria, and Vienna in particular, is known for being pricey. Nevertheless, restaurants and hotels off the tourist trail are reasonably priced. Centrally-located hotels with rooms costing around 50€/night for 2 people are not hard to find, and less touristy restaurants are also fairly cheap. A huge bonus of Vienna is the cost of public transport; a 72-hour travel card costs around 15€ (about £11.50) which allows you access to the entire public transport system within Vienna.

Famous sites such as the Wiener Staatsoper (Opera House), the Museumsquartier, Rathaus (City Hall) and the Hofburg Palace are all within walking distance of each other, and all of them are beautifully imposing. To reach the Hofburg Palace you can walk up the Kohlmarkt and Graben which are home to the designer shops – window-shopping is a must! A must-see at the Hofburg is definitely the Spanische Hofreitschule (Spanish Riding School), and if you can get tickets to one of their Saturday-morning performances, I would really recommend it! Other notable sites in the same area are the Kunsthistorisches Museum and the Naturhistorisches Museum, facing each other across a garden which plays host to a festive market at Christmas (as do many of the main landmarks in the city).

The Museumsquartier houses many of the city’s other museums, from the Zoom Kindermuseum (the Zoom Children’s Museum) to the MUseum MOderner Kunst – MUMOK (Museum of Modern Art), and the square in the middle is a place for groups of people to gather in the sunshine in the summer, or for Glühwein and Punsch in the winter. For those that would rather wander round the shops, Mariahilferstrasse, perpendicular to the Museumsquartier, has both high street shops as well as places selling traditional Austria wares. The zoo at the Schönbrunn Palace is also worth a visit, not least for the animals, but also the stunning gardens which amaze whatever the weather.

Vienna has varying activities depending on the season. In the autumn you will see pop-up stalls selling Sturm in and around the city centre; this cider-like drink is well-worth trying. You will also find many people celebrating Oktoberfest around the city, with numerous bars and tents set up for dirndl- and lederhosen-clad people to enjoy the Germanic tradition. In October you can attend Lange Nacht der Museen (Long Night of the Museums) which, when you buy a ticket for 13€, allows you entry to all of the museums in Vienna between 6pm and 1am; a great way to see a lot of places for not much money. Christmas Markets are of course a staple of Viennese life in winter. There are dozens of them dotted around the city between mid-November and Christmas Eve, and they sell everything from homemade Christmas decorations to hats. Two of my personal favourites are the market outside the Rathaus as it truly is beautiful although slightly more commercial than others, and the Altwiener Christkindlmarkt which is very traditional.

In spring and summer it can get very hot. Hire paddle boats or motor boats and spend the day on the Danube in the sunshine; or enjoy cool and refreshing drinks in one of the riverside bars, or those cafes that line the streets and parks around the city. Another option for a relaxed day out in the hot weather would be to visit some of the palaces that dot the city centre and explore the beautiful gardens, most notably Schönbrunn Palace towards the end of the U3 Metro line, or the Belvedere Palace near the main station (Hauptbahnhof). The amusement park at Prater is also great fun, and thanks to the numerous rides and attractions it is incredibly easy to spend an entire day here; the best thing is that it is very central and can be easily reached by public transport.

For visits within Austria, Graz is just a short train journey away, and although much smaller than Vienna, it is equally as beautiful. Similarly, Salzburg is only a couple of hours away on the train, and is amazing. If not the most well-known Austrian city, it most certainly is one of them, and is stunning. Most famous in the UK for the Sound of Music (which very few Austrians have ever heard of), it really lives up to expectations; it even offers numerous Sound of Music tours for those hardcore fans among you, and I would highly recommend one!

Due to its location on the eastern border of Austria, Vienna is incredibly well-placed to explore Europe. Bratislava is a particular favourite as it is close enough for a day trip; only half an hour by train or an hour-long boat trip up the Danube. For people that want to travel further afield, there are direct trains to Venice, Budapest and Prague, although these would require more than one day to make them worthwhile.

As you would expect with any capital city, there are hundreds of bars and restaurants to choose from. For traditional Austrian fare, visit a Heuriger which serve traditional meals and are often run by families, giving them a real homely feel. Vienna is particularly famous for it’s tradition of Kaffee und Küchen (coffee and cake), with Cafe Central near the Hofburg Palace being the most popular location for it. Nevertheless, the majority of cafés in Vienna offer this tradition, and I personally would recommend Phil off Mariahilferstrasse.

Similarly, there are numerous bars and clubs around the city. Café Leopold and Halle in the Museumsquartier are great fun, and their location nestled amongst the city’s museums is definitely unique! Danube is also a great bar, although you need to know where it is before going as there is no sign outside. Located just off Mariahilferstrasse as well, it serves cheap drinks, has DJs, and is the perfect bar-cum-club. Some clubs play chart music, although the majority play slightly more alternative music, and there is a very popular electronic and techno scene in Vienna; Flex which sits by the Danube hosts many electronic nights for those that are interested! For a more sophisticated drink, although not typically Austrian, visit the rooftop bar at 25hours Hotel which offers a unique décor and incredible views across the city.

Vienna has one of the best transport networks I have seen; with buses, trams and 5 metro lines, it could not be easier to get around.

I would recommend walking around the city centre as it gives you such a good feel for the city, and most of the main landmarks are within walking-distance of each other. There are tram and metro stops at pretty much every landmark, so it is easy to get between the sites if you don’t want to walk.

In terms of travel at night, the U-Bahn (metro) runs all night at weekends, and on weeknights there is a Night Bus that does a comprehensive route around the city so you needn’t be concerned about getting home in the early hours!

Vienna has an airport, and there are several buses that take you from the Terminal to the city centre for around 8€. Similarly, the CAT (City Airport Train) goes right into the centre and takes about 15 minutes. Bratislava airport is fairly close, and there is a bus that goes from Bratislava directly into Vienna.