We Will Remember Them. 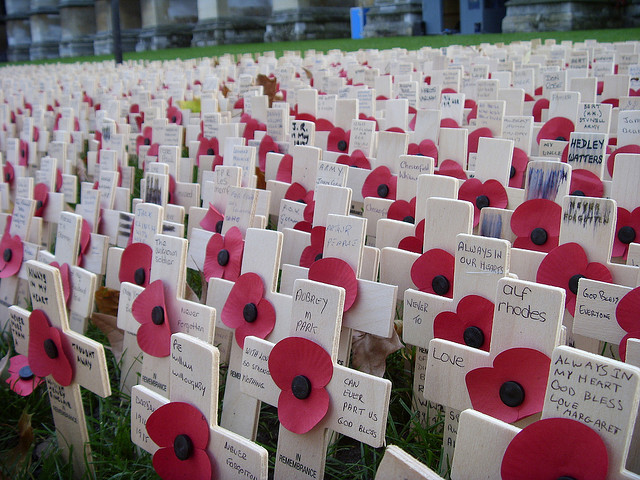 It is that time of year when days start getting colder, nights start drawing in, and that understated, yet elegant red paper poppy starts reappearing on coats and jacket lapels. However, it is only really at this time, for most of us, that we are exposed to the honourable work of the Royal British Legion.

Money donated to the Poppy Appeal is money well spent, helping both young and old Service personnel. Figures on their website list the countless ways in which such lives are improved. A simple donation of £5 ensures a friendship visit to a housebound or hospitalised service person whereas a more generous donation of £5,000 gives bathroom adaptations to permanently disabled ex-service people who have proudly performed their duty, with grave personal sacrifice. The latter donations are way beyond the budgets of most students, but every little counts.

Yet despite the fact that most of us wear the delicate paper poppy with sincerity and pride and despite the fact that we are all aware of its loaded meaning, most of us are not aware of the hard work that goes on behind the scenes. The Royal British Legion is about much more than just the annual poppy appeal and it is important to realise that they are active all year round; not just on Remembrance Day.

It was exactly 90 years ago that the Royal British Legion was first formed. The Great War was over, but the emotional, physical and financial suffering of the soldiers who survived and of the families of those who did not, continued. One man, Lance Bombardier Tom Lister, was so concerned by what he perceived to be the government’s lack of response to this crisis that he decided to take action himself, leading to the birth of the Royal British Legion. Right from this humble beginning the Legion was dedicated to improving the lives of soldiers, ex-soldiers and their dependents. And nine decades on, still the Royal British Legion continues this work.

The invaluable help that they provide differs widely, varying from soldier to soldier, family to family, need to need. The Legion provides practical medical help for soldiers who return from conflict with injuries and sometimes life-changing disabilities; they provide financial and legal support to Service personnel when it is needed; they care for the psychological needs of soldiers by providing breaks and companionship.

Although supporting the needs of the Service personnel is at the centre of the work of the British Legion, they also support the families in the tragic yet inevitable circumstance of a fatality. Having a support network, whether it be family, friends or the Royal British Legion, is of paramount importance and great comfort during the difficult process of grieving. The sensitive advice and support provided for bereaved families by the Royal British Legion is certainly not to go without mention.

With the current conflict in Afghanistan, the Royal British Legion is just as valuable, appreciated and necessary now as it was 90 years ago, when it were founded after the Great War, the war so hopefully yet erroneously termed at the time: “the war to end all wars”. In an ideal world without the recurrent weakness of human conflict, such organisations as the Royal British Legion would not be needed at all. However, as we do not live in such a Utopia, we should show our support in whichever way we can, whether that be by donating directly, by volunteering for the Legion, or by simply making the effort to give a smile to a Service person passing in the street.

This Remembrance Day, in the two-minute silence, I hope that the Royal British Legion will be silently honoured, as well as fallen soldiers whom they serve.