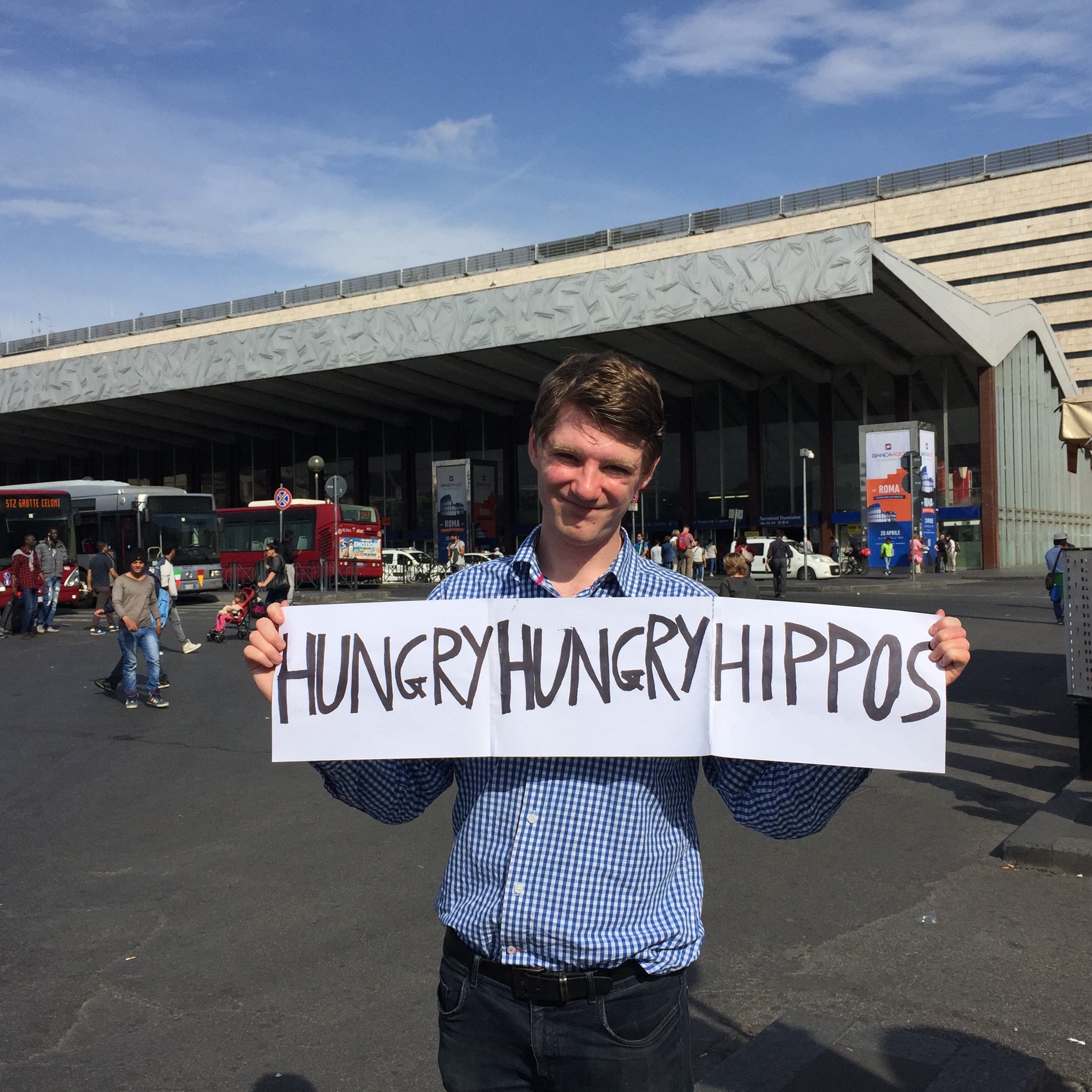 I’ve talked about the roads. Public transport is no better. Take the bus system for example. In Britain, everyone boards the bus from the drivers’ entrance and individually buy their ticket, the price varying according to the distance travelled. It’s fair, thorough, and ensures everyone pays. It does mean boarding the bus takes far longer, but hey, we’re British – we love a good queue. Italy, on the other hand, does things a little differently. For a start, you don’t buy your ticket from the driver, but instead beforehand from a centralized ticket dispenser called ‘ATAC’, which looks like a large, multilingual dispenser of disappointment and inefficiency. Each ticket is valid for one on-off journey, and doesn’t differentiate between lengths of journey: it matters not whether you are travelling one stop or 20, all journeys cost €1.50.

Of course, this hardly matters, because the Italians really haven’t got into the spirit of paying anyway. The bus pulls up to a stop, both doors open, and everyone just piles on. As people buy their tickets from ATAC, it’s not the bus driver’s job to check them; instead, you are expected to scan them at these little machines that swallow the card, buzz loudly for a moment, before proudly spitting it out again: something that no one does. Genuinely – when I first arrived, wanting to make a good impression as a citizen of the world, I scanned my ticket. Several people turned round and looked at me as if to say, “you really don’t know what you’re doing, do you?”.

Indeed, because the bus is essentially free, everyone uses it, meaning that buses, throughout the day, are completely jam-packed with flustered commuters. There are ticket inspectors (at least in theory), though they’re about as rare as white African rhinos. One time, however, two (or maybe both?) of them showed up and demanded to see everyone’s tickets. Incredibly, a good 90% of the passengers had to disembark. This was during rush hour, and it really made quite a scene, as perhaps 70 people reluctantly trudged off the bus before all standing at the stop, waiting for the next one, where they could try their luck again. After that, the bus was almost completely empty – the only people left on it were silly tourists like me.

Then we have the metro. There are two lines, creatively called ‘A’, and ‘B’, broadly running diagonally across the city. Italians always speak of the London underground with a sort of incredulous awe: “11 lines? Stupendo!”. The reason for this paucity in metro lines is understandably that, being an ancient city, it has an immense amount of Roman ruins hidden underground that would have to be drilled through, which would be both a cultural outrage and a downright faff. Thrillingly, though, work has commenced on Metro Line C(!), which will fill in some of the other blank bits on the map. Indeed, such was their enthusiasm for the project, my Rome 2012 map already had the line marked in, a detail that proved confusing when trying to find my way around the city as a fresh-faced arrival, especially seeing as it wasn’t due to be opened until 2014. Well, 2014 has come and gone, and still no sign of the metro – parts have been opened in the suburbs, but that’s about it.

Between the two of them, Rome’s metro does fine. It covers the city centre but it does mean travelling further afield lacks the same precision as, say, London. It always seems to be the case that you emerge, blinking dazedly in the Mediterranean sun, and have to walk about 10–20 minutes to get anywhere. You proceed through the turnstiles (which are always a bit of a blow, because you have to buy a ticket), and down the escalator. Incidentally, the Roman metro has the best music. It’s really funky and bassy, and hearing it, you can’t help thinking you’re in some cheap, subterranean porno from the 80s. You stand on the platform bobbing up and down in time to the rhythm, waiting for the train, which is delayed for some unexplained reason (someone fell on the tracks; there was a collision; the driver lost his keys; a zombie scourge is blocking the station ahead).

Eventually, though, the train does roll up. However, the driver often seems to have a bit of bother stopping. One time, it was pulling in and – without slowing down at all – the doors just opened, as if inviting passengers to perform a ‘tuck-and-roll’ manoeuvre out of the moving carriage, before hurtling on to the next station. On another occasion, the driver missed the platform completely, and had to reverse back down the tunnel. This time, though, the driver does manage to stop the train (one of the only two jobs he has to do, the other being ‘start’). You get on and, doors sliding shut, the metro splutters and judders its way down the tunnel, like food in a sumo wrestler’s digestive tract. Overall, you’re probably better getting the bus – at least that way you don’t have to pay.

Now, the two metro lines that the city does have intersect at Termini train station, which I would say is the most hateful place in all of Rome. In an effort to rebuild after fascism, Rome decided to build Termini in 1947, which is a shame, really, because if it had been built 5 years earlier, it most likely would have been destroyed in the conflict – hopefully with the architects still inside. Yes, this is a building of astounding ugliness: a vast, grey, characterless mass, standing in front of an equally vast tarmac piazza without a hint of greenery, it truly resembles some Orwellian dystopia. Off the front of it, a great concrete overhang juts out, looming over the taxi rank. The whole thing looks like a giant game of Hungry Hungry Hippos.

The inside is just as woeful. In general, Italy is pretty good at keeping the high street brands out of sight, but here the government has prostituted itself to those very same companies. The result is a most stifling display of capitalism, which is all a bit soul-destroying; especially when you compare it to the earnest, family-run businesses located only a few blocks down the road. For those arriving by train, Termini will be the first impression Rome has on them. In terms of making a good first impression that is representative of their city and culture, the government have well and truly cocked up.

Completely unexpectedly, though, the actual train system is very good. They are clean, comfortable, and cheap. One return ticket to Monte Cassino (an hour away) cost €16: a little less than a taxi ride to the centre of town. However, most amazingly – and in a very un-Italian manner – these trains are punctual. During my time in Rome, I have never experienced a delay, which is more than I could say for Virgin CrossCountry, Richard Branson’s sorry excuse for a train service.

In conclusion (because all academic works need a conclusion): the problem with Roman transport and infrastructure is that it hasn’t made up its mind about what kind of city it is. Some cities, such as London and Athens, have made the clear decision that they want to be modern cities, and so have swept aside all of the old stuff, making room for new and modern improvements, with only the slightest nod to their previous ancient heritage (ironically still the main areas the tourists find interesting). Then there are cities like Venice, which have made no concessions to the modern era at all, instead proudly polishing their early-medieval credentials, like Paul McCartney and his Grammys. They maintain their canals, they spit in the face of public transport, and they positively flaunt that the place is almost impossible to negotiate. Only in Venice is inaccessibility their main selling point.

Rome, on the other hand, evidently wants to be a modern city, having introduced things such as the tram and the underground (okay, the tram is a late 19th century invention, but you get the point), but also wants to preserve that ‘city-that’s-a-museum’ feel. This half-hearted commitment has left Rome in the somewhat awkward position of straddling both past and present: the result is beautiful buildings – and indeed whole quarters of the city – that symbolize Rome’s former greatness, marred by astonishing, cankerous eyesores. Someone really ought to tell Rome that you can’t have your cake and eat it too.