Can we consider propaganda as a form of art?

From British war-time posters to the social realism movement in Stalinist Russia, propaganda has been employed by many governments, particularly in the 20th century, with the aim of promoting, and to some extent, persuading people of a certain political view. However, this is exactly where the debate between art and politics lies. Is it possible to view propaganda as an artistic product when its very nature is largely considered to be deceiving?

While it may be the case that propaganda bends truth in order to further a political agenda, which arguably detracts from its artistic qualities, on the other hand if we go even further back in time than the 20th century, does this change our view that propaganda isn’t art in any way? For example, looking back at Ancient Greece, the very reason the Parthenon was built was as a propaganda ploy. It was built at a time following Athens’ triumph on the battlefield over its enemy, and was therefore succeeded into a position of strength, both economically and politically. Essentially, it was built to champion the city-state of Athens and in order to remind the Athenians of how great and powerful their city was. However, what is interesting is that many people would consider now that the Parthenon is a piece of art, not just architecturally but also when considering the intricate detail of the sculptures that were used to decorate it. Taking this idea into account, what has changed so much that 20th century propaganda posters aren’t considered art? 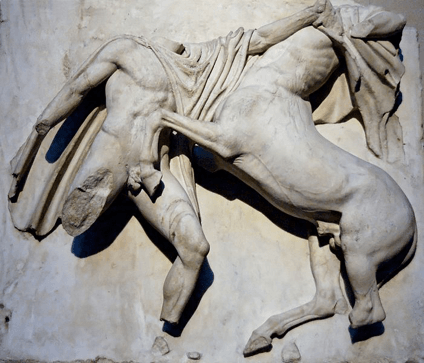 Image via Wikicommons: South-facing metope on the Parthenon, Ancient Greece

This sparks an ongoing debate about how propaganda has evolved over the centuries. It seems that 20th century propaganda focussed mainly on the message: ‘Dig for Victory’, ‘Make do and mend’, Your country needs you.’ All these messages are extremely powerful and served a direct purpose, although artistically, an image of a man with a spade is clearly not something to rave about. On the other hand, in Ancient Greece, although the message would have been clear: the focus seemed to have been on luxury and extravagance which manifested itself in the amazing and intricate detailing of the temple and its decorations. 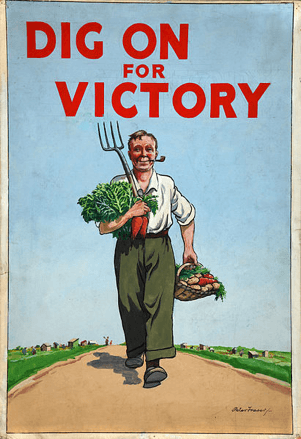 It is true that perhaps we should not view modern propaganda as ‘unartistic’, particularly when comparing it with Ancient Greek propaganda. Essentially these two things are united in purpose but, in the art world, viewed upon as completely differently. However, at the same time, it is problematic to view this in such a simplistic way. Things change over time – people’s views change, civilisations evolve, and what is common thought now, might become redundant thought in the future (or have already been in the past, for that matter.) People in a few hundred years’ time may view propaganda posters as the epitome of the artistic world (much in the way we view Greek art now), and want to admire and analyse them. This may be a slightly controversial view, but nevertheless the idea is that something which is subjective is bound to change and evolve. Therefore, it almost seems like this idea has created an ultimate, indeed ever evolving, line of questions.