The Ancestor You’ve Never Heard About

Human evolution is a sensational story that captures our imagination, where breakthroughs are uncommon but revolutionize the field every time. Just off from the most recent success story of the Rising Star caves and Homo naledi comes another finding, this time two skulls in China about the ancestor most people outside the field have never heard of. 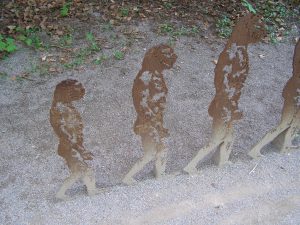 Tantalizing clues have been left, alluding to the existence of another human species in Asia while the Neanderthals lived in Europe, around 45,000 years ago. They are called the Denisovans, and the only physical manifestations we have left are two teeth, a bone needle, a bracelet and a carpal (finger bone) from the Siberian Denisova cave. Three of these items can gives us genetic information, and mitochondrial DNA (mtDNA is DNA that is passed down the maternal line) was extracted and used as molecular clock, to estimate when the species diverged from our last common ancestor. This came to about 1 million years ago!

The extracted Denisovan DNA showed that there were two adult males and a young female in the cave, and that two came from the same population, while the other had such a diverse mtDNA that it surpassed the diversity of all the Neanderthals. What does this mean though? Diversity tells us how populations are isolated and move geographically across history; isolation causes homogeneity of genomes while mixing causes greater diversity. Therefore, are we looking at a population which had a large range and a complex social history of interbreeding?

However, an even more spectacular clue lurks in our midst, and it’s not as tangible as the others. High-altitude inhabitants around the world share physiological features that adapt them to the thin air, such as larger hearts, lungs and greater sustained respiratory rates. Over 3,000 years of living on ‘the roof of the world’ has allowed for Tibetans to become better adapted than any other high-altitude populations, and their isolation has allowed for stabilizing selection to act on their genomes. A variant of the EPAS1 gene is responsible for this great adaptation, and this variant was found in 87% of Tibetans and 9% Han Chinese tested. This suggests little population mixing since their separation,  resulting in almost a complete loss in the Han Chinese population, who did not need this high-altitude variant.

Tibetan EPAS1 was compared to other mountainous populations, but their variant was so different that researchers had to look elsewhere for its ancestor. Then came a hit; the gene was found in the Denisovan genome, which had recently been published from the DNA extracted from the few finds we had – an absolutely extraordinary conclusion, no doubt. These Denisovans had interbred with Tibetan ancestors and given them their EPAS1 gene, which is unlike any other today. Despite not knowing what they look like, their cultural advancement or really anything beyond their genomes, we know they have left a hidden mark in modern humans. The Denisova caves aren’t at a high altitude despite being in the Altai mountains, and so the Denisovans must have gained this adaptation from the selective pressures of high-altitude living elsewhere.

As for the specifics of the new skulls, researchers are looking at fragments of the cranium and a mainly complete cranial base. They’re estimated at 105,000 to 125,000 years old, which is older than the previous Denisovan find. Despite the possibility that it may be Denisovan in origin, there is worldwide disagreement on whether it is its own species or just an ‘Asian Neanderthal’, so researchers have been cautious to call it Denisovan. The skulls have been described as a mosaic of Neanderthal features along with a more gracile bone structure and a larger brain cavity, which are indicative of the trends toward modern human morphology. These skulls are very fragile and old, and DNA may not be possible to extract, so finding the answer won’t be easy, but if more finds are dug up in the coming years, we may be able to piece together a better image.

Dr Trudi Buck, an anthropology lecturer at Durham, stated in her Human Evolution and Diversity module that she believed a complete, frozen Denisovan would be found in Siberia one day, as frozen woolly mammoths had been found wonderfully preserved in the permafrost. I’m sure that’s the exact find the rest of the field are hoping for and will be the greatest archaeological find in the last hundred years. For now, however, this elusive ancestor remains lost in time.