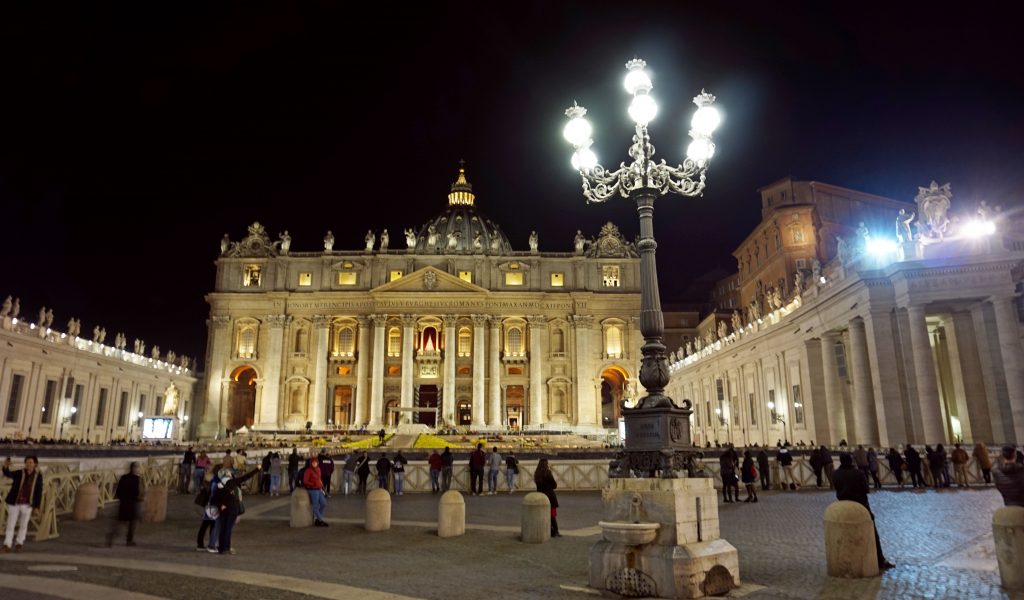 We had planned our trip to coincide our time in Rome with Easter Sunday. This has its risks – there are crowds everywhere, and St Peter’s Basilica is closed to the public on the Saturday and Easter Sunday. But if you got to see the Pope like we did, then it’s all worth it.

Sights
The Easter period is the perfect time to visit. As it’s outside the summer peak season, you’ll only have to queue for an hour outside the famous sights, instead of the many under the blazing summer sun. 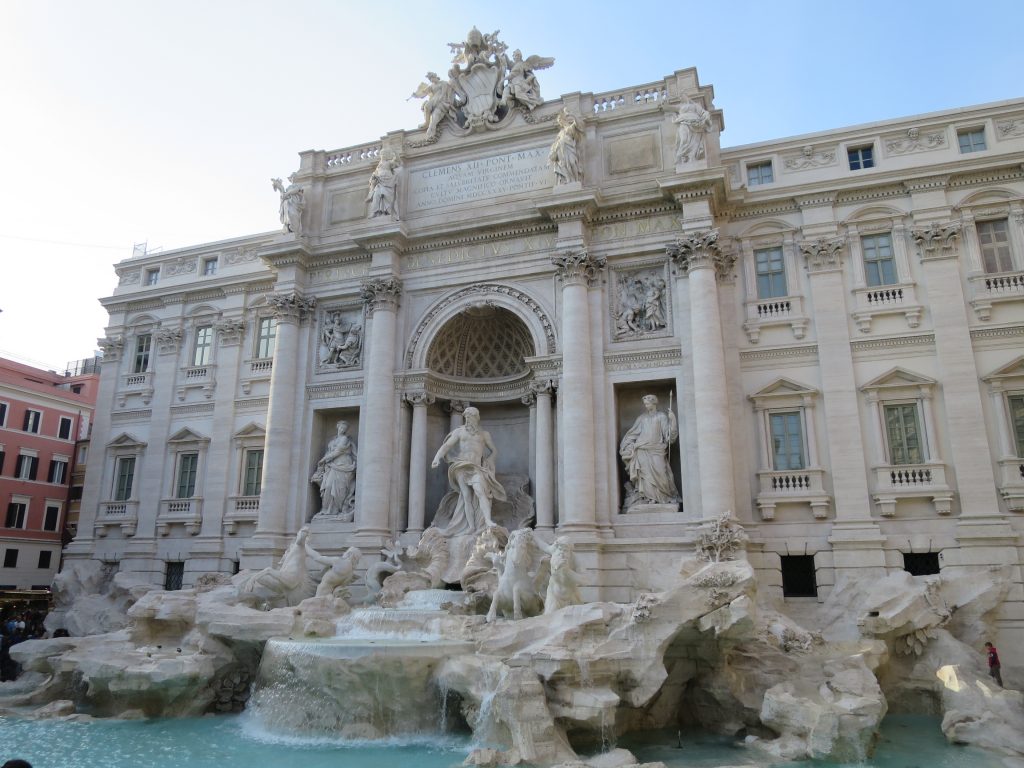 After failing to get into the Roman Ruins area because they were closed for Easter Saturday, we walked to the beautiful and deservedly famous Trevi Fountain. The piazza surrounding the fountain is surprisingly small, and was packed tight with tourists. Still, we managed to throw a coin over rows of tourists into the fountain. Passing through Rome’s high end shopping district and even venturing into Ferragamo on Via dei Condotti, we came to Piazza Navona. The piazza and the surrounding area is perfect for walking around at night, as the streets don’t get empty until 11pm. Only by walking do you soak up the atmosphere of central Rome, with its narrow cobbled side streets, charming piazzas and yellow buildings which glow in the setting sun. 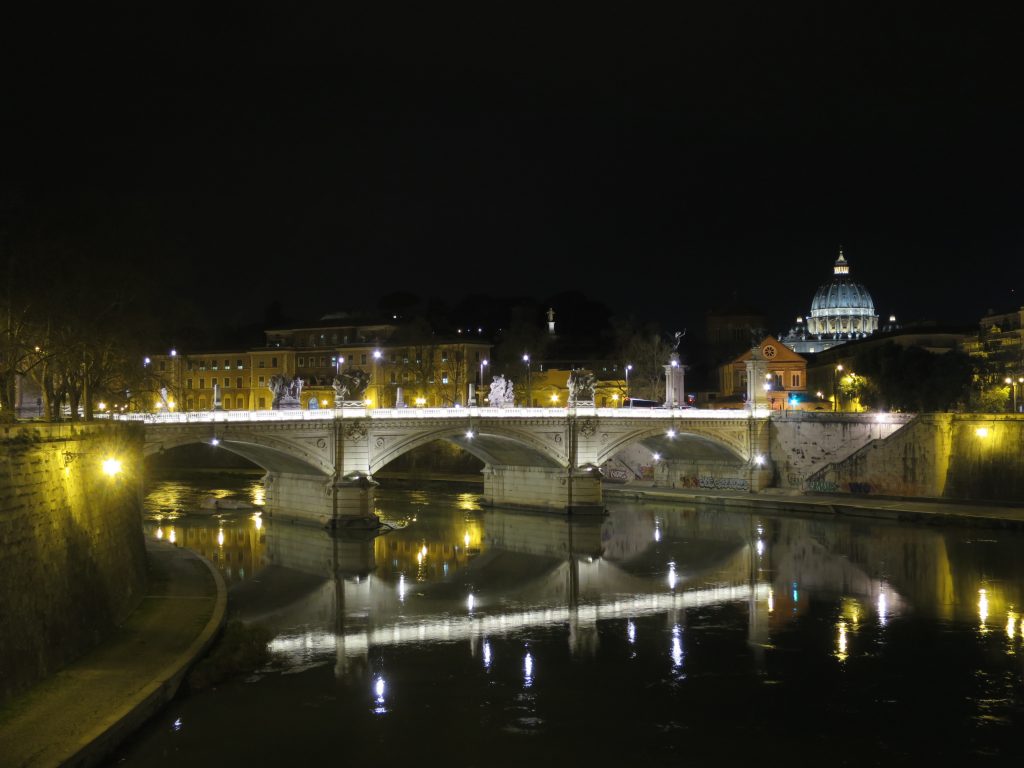 The next day we began at the Museo Vaticano. Remember to reserve online for the museum, this lets you skip 1-2 hours of queuing. This houses the Sistene Chapel, its ceiling decorated with one of the most famous paintings in the world, Micheangelo’s The Creation of Adam. You will have to shuffle along the museum’s many rooms for at least an hour before you can get to the Chapel, but most of these rooms feature beautiful tapestries and paintings, my favourite being Raphael’s Philosophy and Theology. As St Peter’s Basilica was closed that afternoon, we walked to the Roman Racecourse, where we lay in the grass to soak up the sun and some more gelato. We then watched the sunset in Giardino Degli Aranli – a hidden gem. From these orange gardens on the Aventine Hill one can watch the sun set over the River Tiber and St. Peter’s. There are more locals here than tourists – that’s when you know you’ve found a good spot. Beautiful view from the Giardino Degli Aranli of the River Tiber flowing through Rome.

That night we walked past an unusually well lit Vatican City, and to our surprise St. Peter’s Square was open to the public! We almost ran into the square, and that was definitely the quickest border crossing I’ve ever experienced. Remember to try and visit the square at night – it is beautifully lit and when all the crowds are gone the Basilica looks way more grand. Showing on giant screens in the square was the Pope’s Saturday evening mass from live from within the Basilica. The psalms flooded the empty square with holy melodies. 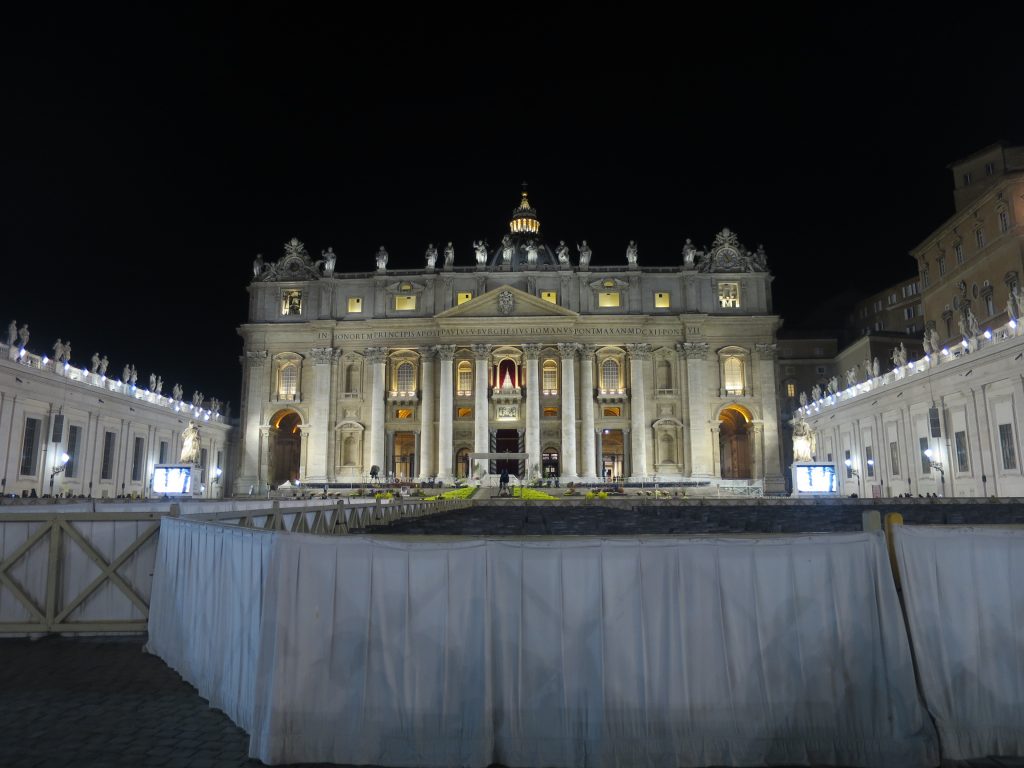 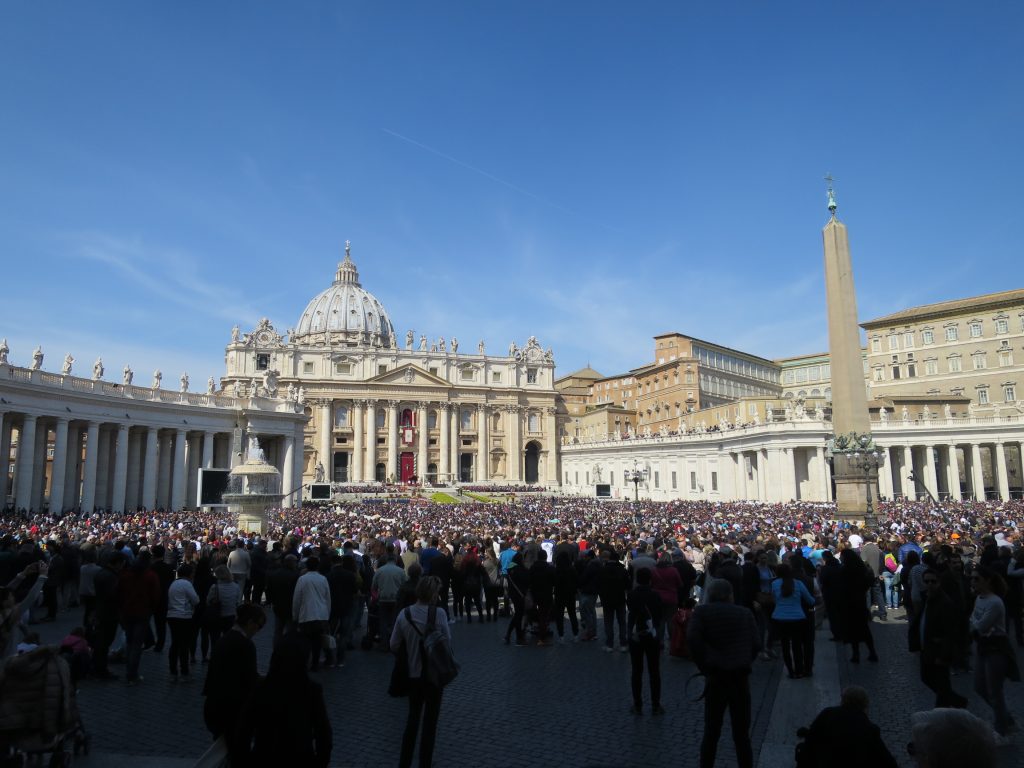 We never expected to be able to watch the Pope’s Easter mass from within St. Peter’s Square. We’ve all seen on TV the huge crowd that gathers every Easter to receive the Pope’s speech and and blessing. But this year, we were among the 80,000 that got to see the Pope in the flesh! Having gotten to the square at 11am, we were, to our total surprise allowed in. Although not religious myself, it was incredibly exciting to see the Pope emerge from the Basilica, then get onto his pope-mobile. At first he was just a white dot in the distance. Then the Pope had turned a corner and came straight towards the back where we were standing. The Pope whizzed past not more than 20m away from us, and seeing his smile and wave, I couldn’t help but join in with the cheering crowd. At noon, he emerged from the balcony to give a 15-minute speech in Italian. Not able to comprehend a word, I was still hypnotized by the silent crowd of 80,000, that white dot in the distance, and the perfectly blue sky. It’s a moment I’ll always remember, and definitely ended our trip on a high. 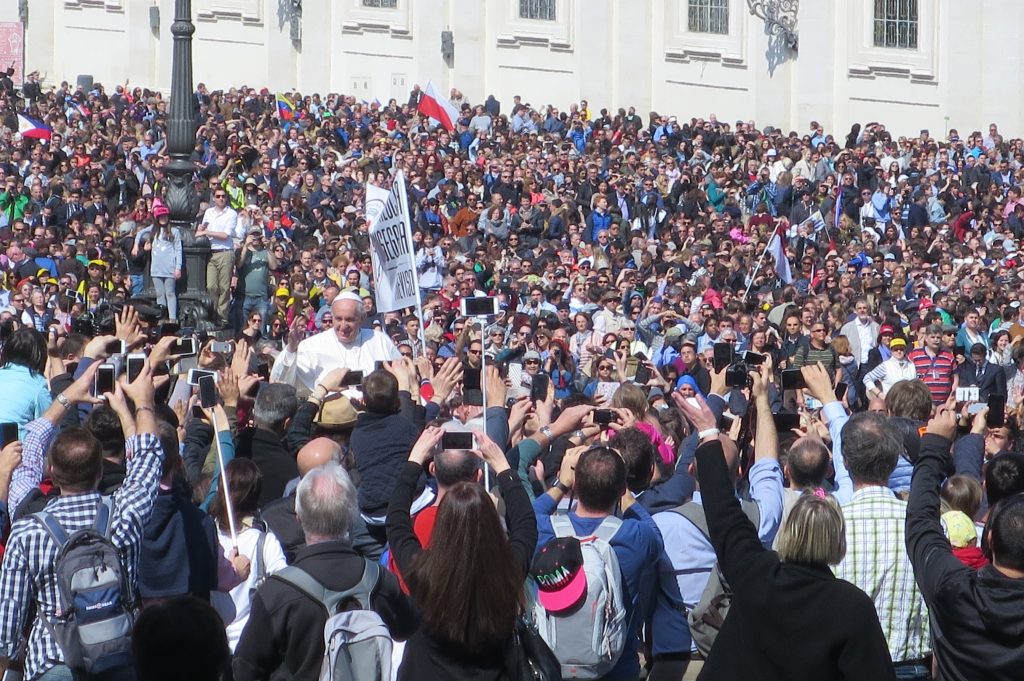 The smiling Pope a mere 20 meters away. The side streets beside Piazza Navona are a treasure trove of great eateries.

Rome has an endless number of great restaurants, but there are also a huge number of tourist traps. Well, basically all of those right next to or inside the big sights – Coliseum, Piazza Navona etc. That being said, the side streets beside Piazza Navona are filled with delicious restaurants and bars. We came back everyday to try something new and was not disappointed. I Pizzicaroli, ranked number two on Tripadvisor for restaurants in Rome is a small restaurant 2 minutes away from Navona that specializes in platters of cheese, meats and bread for around €11 per person. It is the perfect place for a snack or a light meal, but the food leaves you slightly baffled as to how it attained such a high ranking, as it is good, but nothing ground-breaking. Still hungry after our platter, we headed to a bar/restaurant around the corner called Mimi & Coco. Packed with locals, and welcomed by very friendly staff who gave us free Prosecco, you can sit for hours on the open-air tables, watching life in Rome walk past. We ended up sitting here for hours, partly because the staff were rather reluctant to give us the bill. I ordered a gin & tonic, which came as a large glass filled with three-quarters of gin and a small bottle of tonic water. Italians must be very generous with their alcohol, because there was almost more gin than water, probably five units’ worth for only €8! 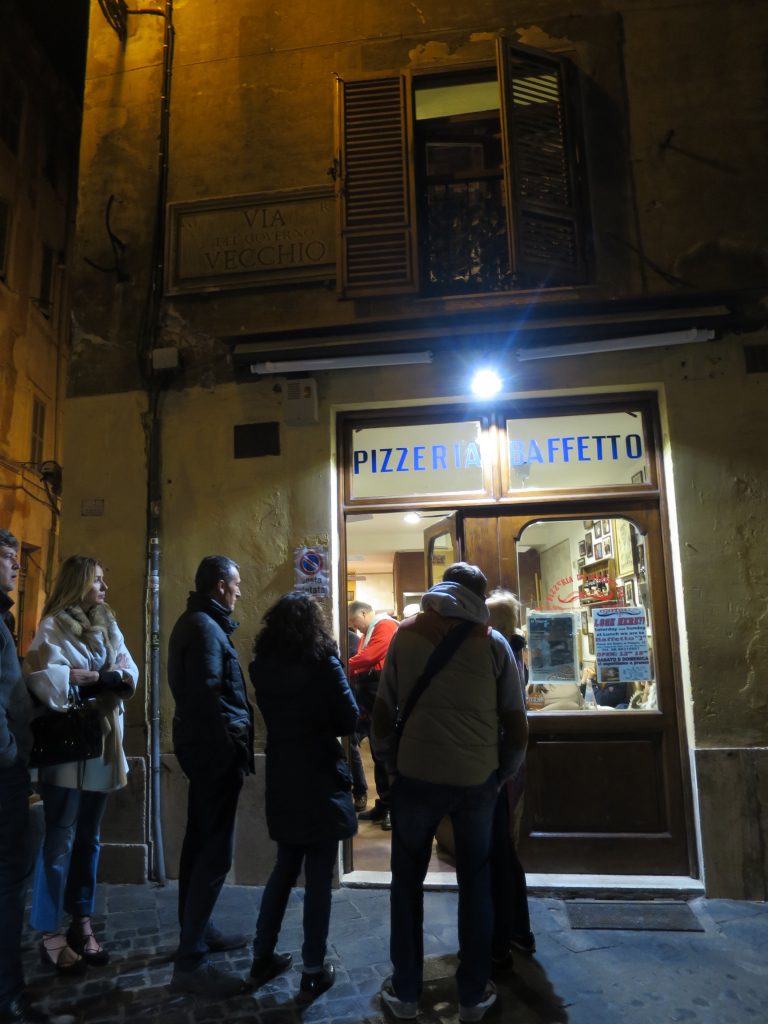 For authentic Romano pizza, you must try Pizzera Baffetti, located also on a street next to Navona. Every night there will be a queue from 7pm onwards, and the locals won’t give up until at least nine o’clock. So if you want to avoid a 30-minute queue get there by 6:30, as Italians don’t eat until at least 7:30. Try to get a pizza with a Italian sausage topping; it goes great with the extremely crispy and thin crust. Pizza Express really ain’t got nothing on this. When in Italy not a day goes by without having gelato, so afterwards we joined another queue right next to Baffetti – the queue for Frigidarium. Unlike the Baffetti queue this one consists of mostly tourists, but the gelato here will not disappoint. It’s only €2 for 2 huge scoops. And whatever flavour you try (I’m sure it’ll be delicious), ask to add their special chocolate sauce onto the gelato. It freezes to form a glossy glazing.

And so that was the end of my eight days in Italy. Out of all that I miss – its amazing cuisine that puts British food to shame, the beautiful streets and architecture, I’ll always reminisce most on the religious ceremonies which make Italy unique in Easter.