If I told my 16 year old self that hey, in 4 years you would be in Durham, having the time of your life, and see all the things your parents told you when you were six to make you fall asleep, she would laugh and tell me it’s impossible.

Before March, Durham was the furthest I’d come from my home in Singapore and the closest I’ve come to seeing the world. Durham was also the first place I fell in love with overseas. Despite its smallness, it kept me fascinated from the moment I stepped on its cobblestone paths, up to the Cathedral, down to the hill in search of Van Mildert College, then rushing back to the train station for a 3-hour train ride back to London.

But Durham is, after all, objectively small. Slightly too small to be staying in for 5 weeks over Easter. I needed a country I could cover in a short time, but big enough so I wouldn’t get bored.

Luxembourg is a landlocked country of about 7000km2 , and shares borders with Belgium, France and Germany. It is one of the founding countries of the European Union, and the Court of Justice of the European Union sits at Luxembourg city. Most know French, German and Luxembourgish (which is a less strict version of German), and have a bare knowledge of English.

Small as it may be, Luxembourg is one of the richest and happiest countries in the world. I visited Luxembourg City, Vianden, and Esch-Sur-Sure. It is said that there is on average one castle per 100 square miles. In just 3 days I managed to tour 3 castles: Vianden Castle, Castle Bock and Esch-Sauer Castle. The Grund from the Viaduct.

My AirBnb room is fairly central in Luxembourg City, but it was still a distance away from where tourists usually go. From my “house”, I took a direct bus into the heart of the city. There, I did what every tourist would do: take a picture of the Grund and the viaduct.

Most of Luxembourg is built on a hill, and the Grund is what they call the space beneath the viaduct. Translated from German, the Grund literally means the ground. There are many quaint little cafes, restaurants and pubs in the Grund; but the most significant structure in the Grund is a hotel, Barrio Grund. I also visited Castle Bock, which surrounded the remaining part of the Grund not beneath the viaduct. Imagine an egg – most of the city would be the whites, and the Grund the yolk. The viaduct surrounds about a quarter of the yolk, and castle Bock takes up another quarter. Its ruins form something like a trail, and there are plaques enacted to explain its history. 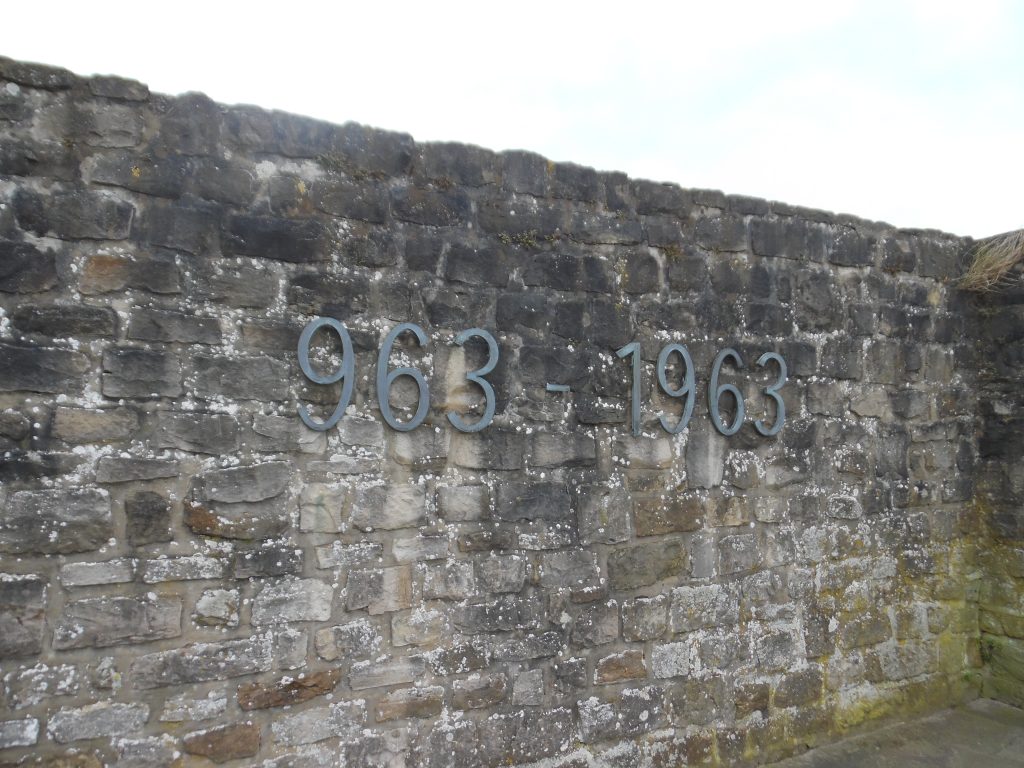 This one speaks for itself: Castle Bock really old. 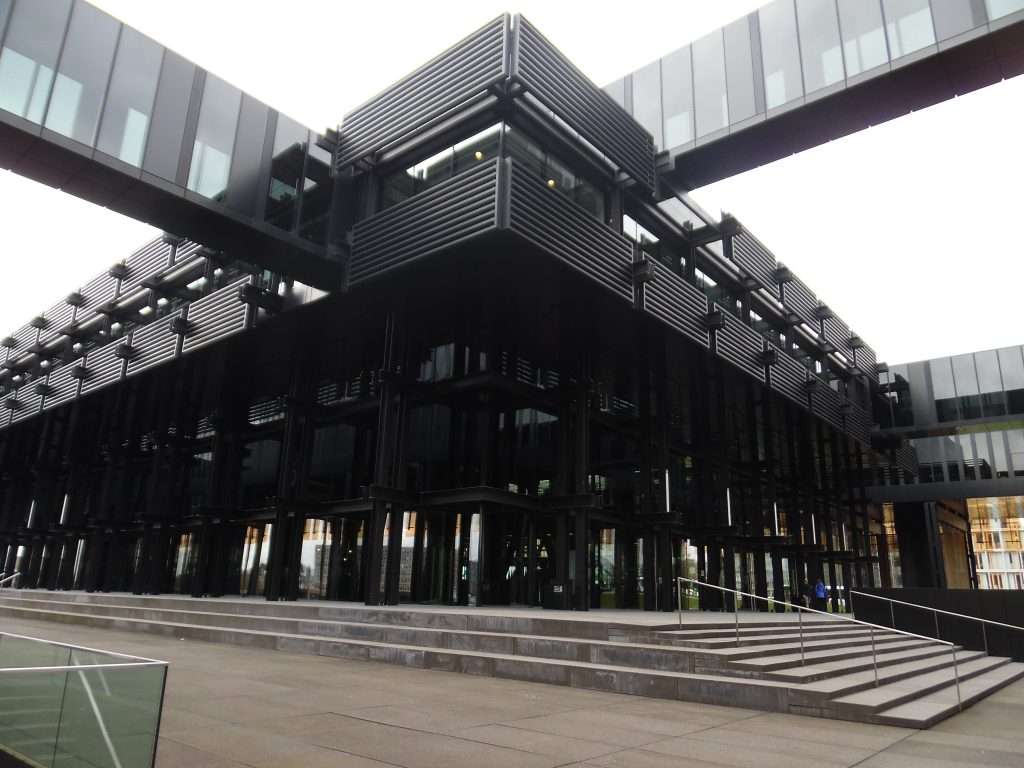 Despite all the excruciating judgments I had to read, the European Court of Justice was worth coming to.

Being one of the founding states of the European Union, it only makes sense that fundamental EU institutions are based in Luxembourg. The European district is an area dedicated to EU buildings, housing the European Investment Bank, the Court of Justice, and European Commission. The spiraling streets of Vianden. Worth the walk!

I ventured out of Luxembourg City to explore more of the country. The famous Vianden Castle is very well worth a visit, built between the 11th and the 14th century. The architectural is an apparent overlap of Romanesque (or Norman) and Gothic styles due to its arched windows and intricate designs of the ceiling vaults. There are guided tours, but I opted out of that in favour of a brochure explaining the route through the castle. Tickets are €6 each, but a student card saves €1.50. Yes, Durham University’s campus card works!

I have this tendency to want to go to the very top of a place wherever I am. So it didn’t trouble me that the castle sits at the very top of a hill in the town of Vianden. Vianden is near Ettelbruck, in the Diekirch region. The entire town spirals upwards, with windings streets lined by quaint little buildings on both sides, like in the picture above. However, Viaden is rather difficult to get to, as it is not serviced by a train station. I had to switch to a bus at Ettelbruck-Gare, which took another 27 minutes.

Vianden was so incredibly beautiful, but somehow too commercialised for my liking. The construction of a chairlift, though good for tourism, ruins the nature of the town. For the chairlift’s mechanic nature, descending from the hill to the centre of Vianden, is unsettling in that it shows how people have been willing to change the town for tourism. Don’t get me wrong, I adored Vianden. But it was perhaps not the truest portrayal of life in Luxembourg as I would have liked. 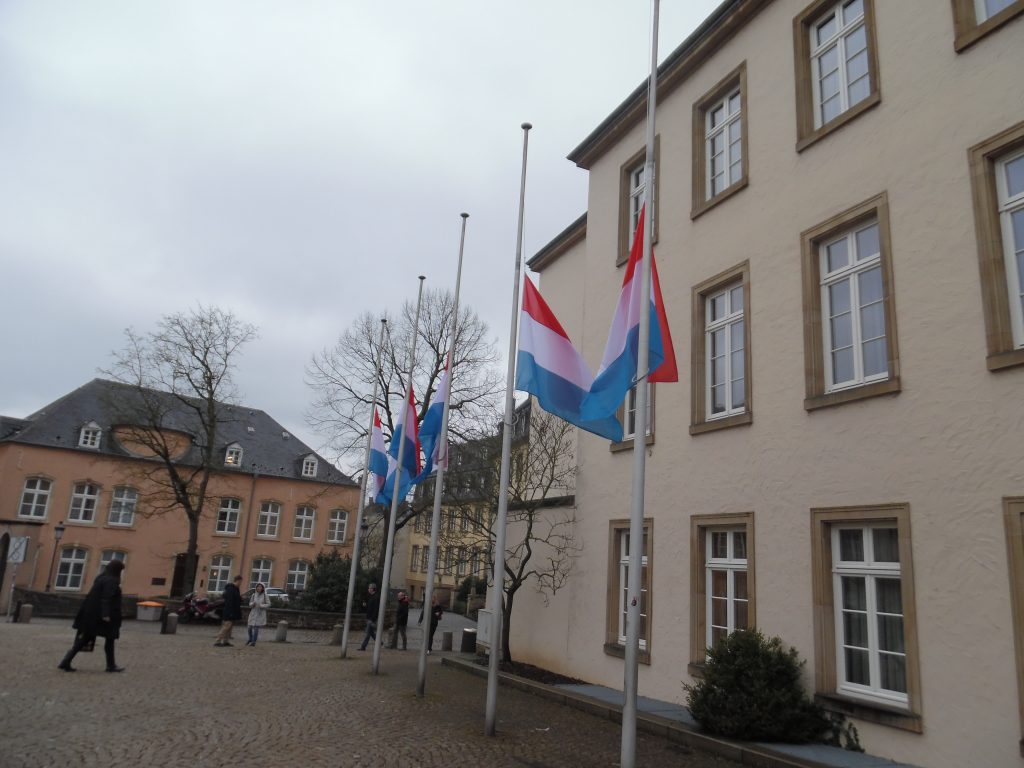 It was 22 March, the day of the Brussels blasts. It was horrible news to wake up to, especially since Belgium borders Luxembourg. The flags of Luxembourg were on half-mast for the remaining days I was there, in remembrance of the dead. 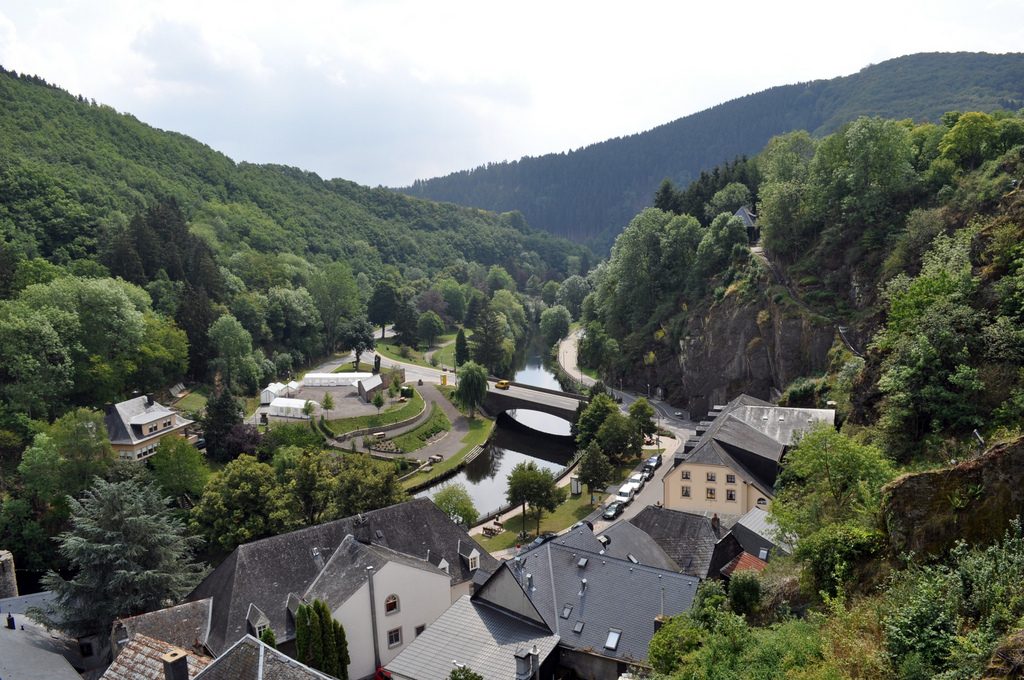 Esch-sur-sure – a town I thought only existed in my childhood bedtime stories.

I went on another day trip, this time south to a little town called Esch-sur-Sure. Almost completely encircled by a body of water, it has multiple bridges connecting it with the rest of Luxembourg. The water was so clear you could see the riverbed from on top of the bridge. There is a castle at the very centre of the town, only accessible via steep steps past a sculpture of Mother Mary. The layout of Esch-sur-Sure was, frankly, quite similar to Vianden, with its narrow winding paths.

Esch-sur-Sure was a town I thought only existed in bedtime stories my parents used to tell me when I was young. It was quaint and quiet. You know its inhabitants lead simple lives. A simple life and a happy one, evidenced by the owner of the only hotel in town being extremely friendly, not just to me, but to all his customers who he personally goes up to and makes the effort to get to know. This doesn’t happen everywhere, but it does here. This is what was missing from Vianden – ordinary Luxembourgian life, with little change made for tourism. The river goes around Esch-sur-Sure.

Luxembourg was a refreshing 5 days, away from thinking about exams, from college food, from tutorials. It was not just a trip in Easter, but it was my first and will always be special to me.