Day trip to Edinburgh: going to a different country?

I went to Argentina when I was 5-years-old, Barbados when I was 6 and California when I was 9. I have been all across Europe: from Paris to Prague, Munich to Montenegro, and Stockholm to Santorini. I have been to Nicaragua, Niagara Falls and Nazareth. But, until a few days ago, never had I visited our friends to the north of Hadrian’s Wall: Scotland.

Leaving Durham at 9:15 on a chilly Saturday morning in late-November, we boarded the train for our 90-minute journey north to Edinburgh. Having grown up in South London, Durham feels northern enough. And so, it seemed that we were about to make a journey to the frozen ice caps of the Arctic, a freezing polar tundra in an almost-but-not-quite England.

The train followed the eastern coastline from Newcastle, through Berwick, past the border and arrived in Edinburgh. Hordes of people disembarked from the train, who, like us, were making their way north to see the Christmas markets of the Scottish capital. Coming out of Edinburgh Waverley station, I saw an extensive number of St Andrew’s saltires, Scotland rugby banners – that day Scotland was playing New Zealand – and men dressed in kilts to mark this very occasion.

As we made our way to Edinburgh castle, the frosty, crisp air was filled with an electric atmosphere, as the streets were packed with locals, tourists, students and sports fans. The 12th century castle, built for Scotland’s King David I, stands over Edinburgh proudly, immediately capturing the gaze of anyone travelling to the city. It acts as a symbol of Scottish national pride, marking the site where Scottish forces, under the leadership of Mary Queen of Scots, defended the city from English invaders in 1571. Having stopped to take photos, and having tried to enter as far as possible into the castle without paying the exorbitant fee, we walked down ‘The Royal Mile’. 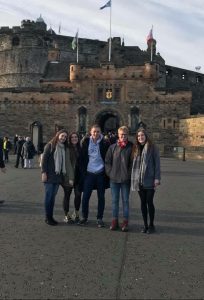 This street, running from Edinburgh Castle to Holyrood Palace, forms the principal passage in Edinburgh’s Old City, which has been populated since the early-medieval era. The thoroughfare is littered with quaint shops selling iconic touristy knick-knacks, including Scottish whisky, fudge, kilts, bagpipes and smoked salmon. At the end of the street, and opposite Holyrood Palace, is the Scottish Parliament, whose power over domestic affairs was significantly increased after the ‘Devolution-Max’ bill in 2014. 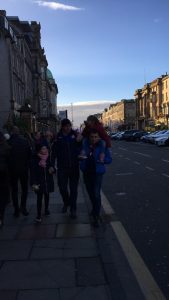 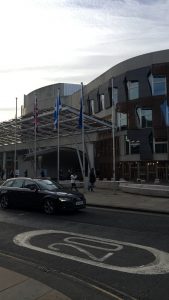 Yet, next to parliament, is St Arthur’s Seat: a 250-metre high hill overlooking Edinburgh from the city’s southeast corner. The hill’s name originates from tales about King Arthur, who, as the legends have claimed, used the site to meet with his knights and court. After climbing the mount, we were granted a stunning, panoramic view of Edinburgh. The early-winter midday sun, although rising rather low in the sky, still illuminated the city and gave us an impressive, clear view of the Port of Leith. Although only 200 kilometres north of Durham, exposure to the North Sea winds made standing on St Arthur’s Seat strikingly cold. Maybe it’s the temperature that has created the image, or perhaps stereotype, of the Scottish as tough, hardy and resilient people.

We climbed down St Arthur’s Seat and headed for Edinburgh’s Christmas markets, which were bustling with tourists and locals alike. The colour, lights and music lent an irresistible energy to the German-style Christmas markets, where Scottish and German flags were flying proudly. Albeit only November, the Christmas decorations created a festive flavour, and as dusk set in – at only 15:00 – Edinburgh’s stores were charged with an almost fairy-tale-like buzz. 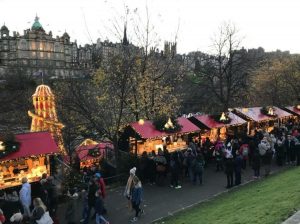 The Christmas Markets in Edinburgh

But beneath the happiness of the festivities lies, as I had come to notice, Scotland’s darker shadows. This nation – if I am to call it a nation – has something of an identity crisis. This was most notably reflected outside Scotland’s parliament, where I saw flying the Scottish, British and European flags. For the display of these flags reflects the distinct layers of Scottish national consciousness and the complexities that surround it. The Independence Referendum of September 2014, where 55% of Scots voted to stay part of the United Kingdom has, instead of resolving the country’s internal political divisions, served to embolden them. Nationalist politics to Scotland is daily politics, and June 2016 clearly enhanced these tensions. 62% of Scots voted to remain in the European Union, whereas 52% of Brits, overall, voted to leave it. Scotland, on the far fringes of the continent, rejected England’s euroscepticism and, unlike the majority of the UK, made clear its intention to stay in Europe.

This begs us to ask: is Scotland the nation and the United Kingdom merely the political state? Are ‘Scottish’ and ‘British’ mutually exclusive identities? When the train leaves Durham and heads north to Edinburgh, what border am I crossing? Is there even a border? For the line feels simultaneously both very imaginary yet strangely real. While it is no political border, it certainly still acts as a cultural, national, and perhaps linguistic one. But imagined borders matter. For it marks the distinction between two opposing – Scottish and English – identities, but the meaning in this divide is reduced when we imagine a collective British identity. Can you be Scottish and European, but not British? Can you be Scottish and British, but not European? Or why not just British, or Scottish, or neither, or everything? Do multiple identities contradict each other or shape each other? 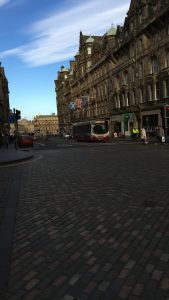 Competing, or complimentary, natonalisms in Edinburgh. This is reflected in the presence of both Scottish and British flags

Scotland acts as a microcosm for nationalist crises, arguments and aspirations. Edinburgh, a city with roads such as ‘Union Street’ – named after the Acts of Union between England and Scotland in 1707 – yet littered with St Andrew’s crosses – the symbol of Scottish patriotism – embodies this nationalist conundrum. Rich in culture, history and tradition, I have no shame in saying that, in the event Scotland became independent, the UK would be sad to lose Edinburgh. And I too would be deeply upset to lose this city.

For in times of great political uncertainty, I believe that nations have a duty and responsibility to come together, not detach and disconnect from each other. I remain deeply suspicious of separatist movements. Countries find strength, or at least should find strength, in including and welcoming others into the general body of the nation. So, I apologise to any fervent Scottish nationalists, as much as I can sometimes sympathise with your cause. For the beauty of Edinburgh has made me feel even more strongly about preserving the United – not Disunited – Kingdom.