Basque in All Its Glory 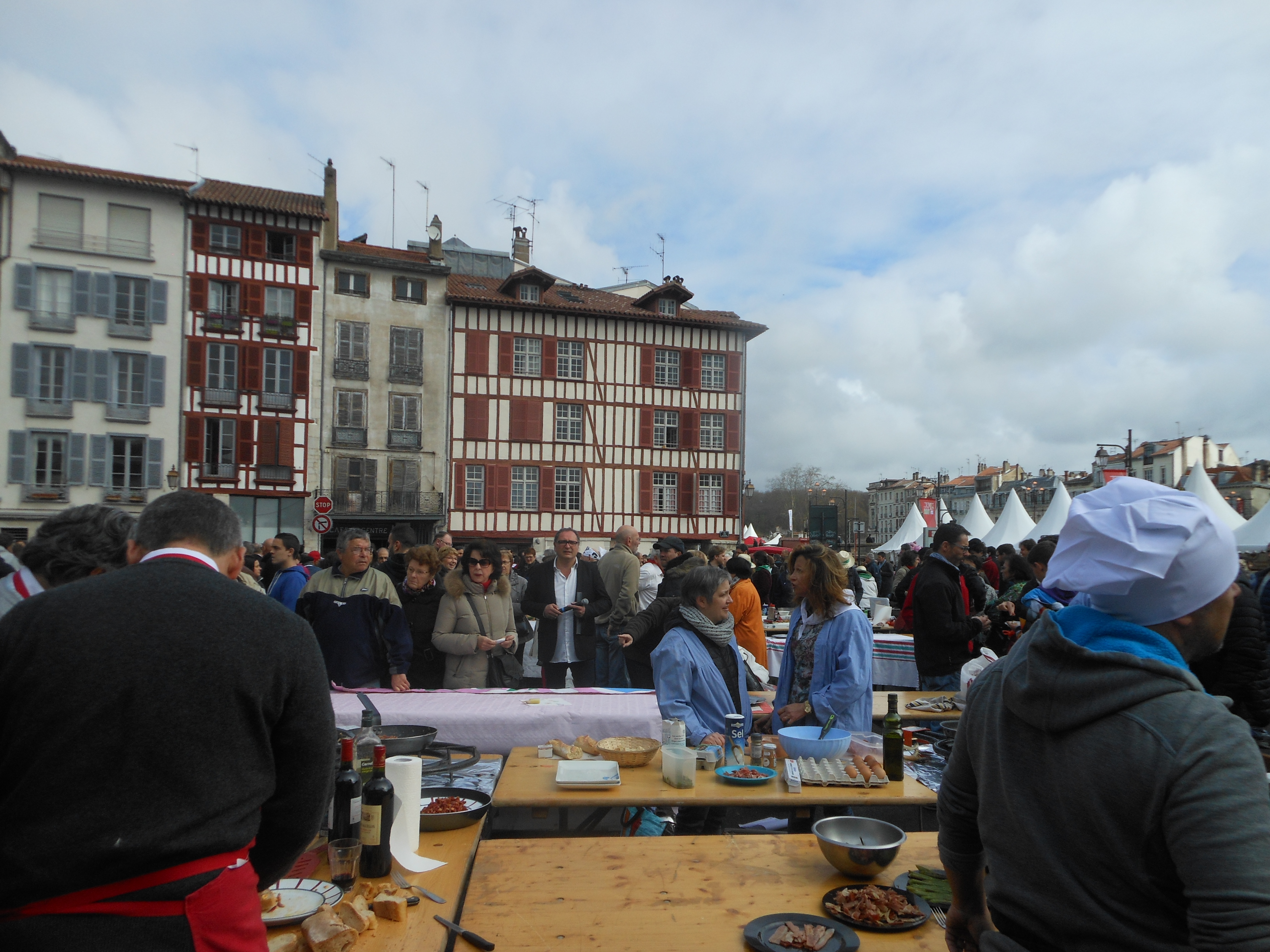 I was always looking forward to travelling during my year abroad so, when the long Easter weekend came up, I jumped at the chance to explore somewhere new. Unable to decide whether to remain in France or travel over the border to Spain, I naturally opted for both and, along with my boyfriend, ended up planning my first trip to the Basque Country. And fairly successful it was, too. Here’s a little round-up of the places we visited:

Our first stop was Bayonne. Arriving late at night, we were surprised to find the town centre jam-packed with people eating and drinking (having spent the past six months in a quiet village in rural France, I have become very easily impressed by any sign of nightlife). As we walked on, it became pretty clear that these people were more than the average Friday night crowd; it turns out that our visit coincided with the annual Foire au Jambon (‘Ham Fair’). We were pleasantly surprised, then, to spend the following morning sampling local meats and other gastronomic delights, including tortilla flavoured with piment d’Espelette, a chilli pepper cultivated in the region. Attracted by the irresistible smell of open-air cooking, crowds of people milled around, eager to get their hands on some fresh local delicacies, while jazz bands added their own musical flavour to the already lively ambience. All this in the beautiful setting of the main square. Situated right by the river (Bayonne stands at the confluence of the Nive and Adour rivers), the place is surrounded by tall stone houses, the windows of which are adorned with maroon-coloured shutters. These are a prominent architectural feature in the region, so much so that this deep-red colour has become widely known as rouge basque. All this made for a wonderful visit to a delightful town; Bayonne is definitely worth a stopover while visiting the Pays Basque, even more so if there’s free food going! 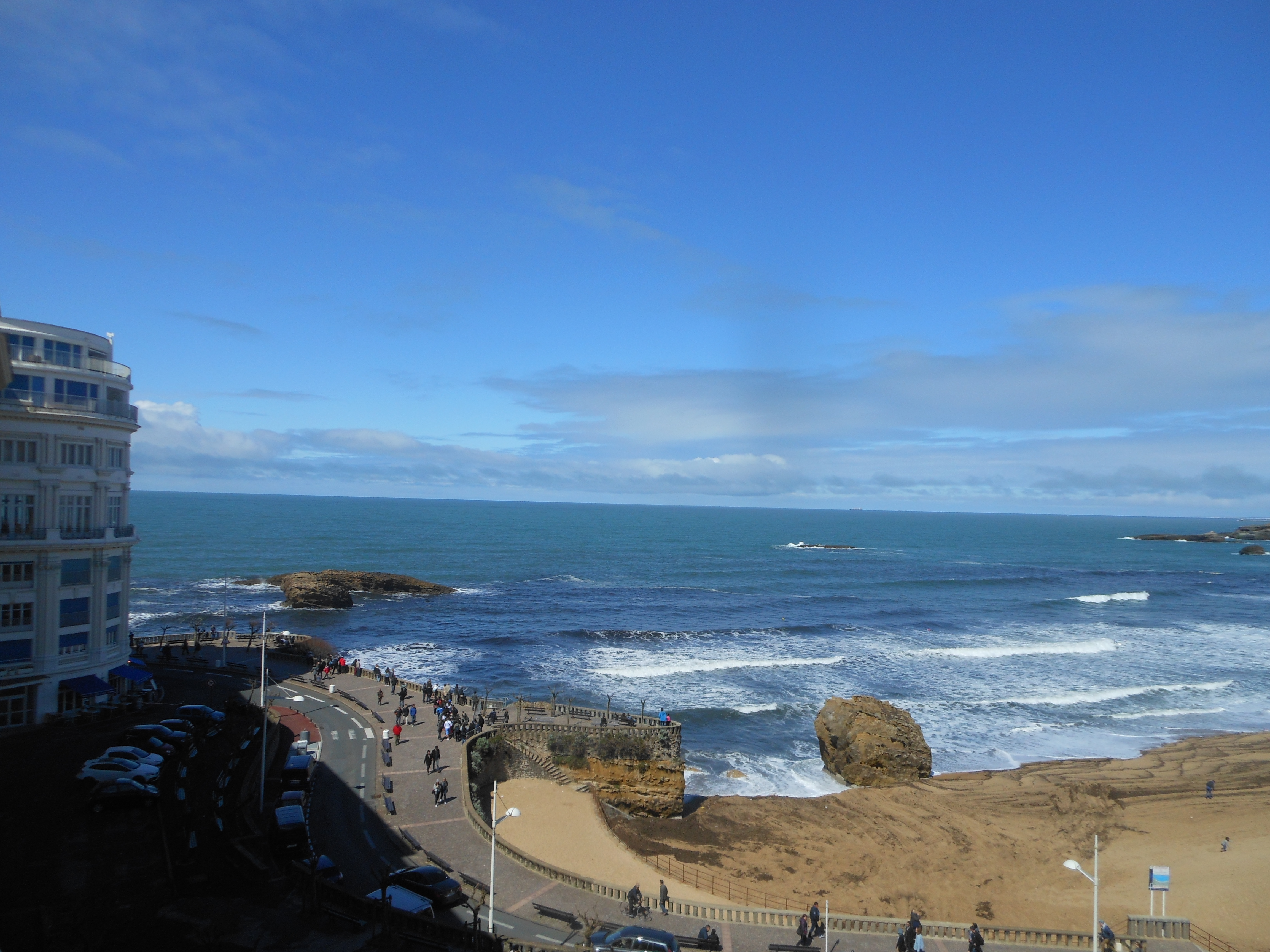 The Basque coastline from Biarritz.

The following afternoon, we spotted a bus to Biarritz and, with a few hours to spare before our next train, we decided to climb aboard. I didn’t know much about the city itself, but to me, the name Biarritz conjured up the typical image of a wealthy seaside town frequented by well-dressed tourists seeking a little southern-French sun. For good or for bad, this is exactly what it was. Situated right on the coast, the town boasts a lovely beach and laid-back atmosphere, but I couldn’t help but feel it had a little something lacking compared to the other places we visited. I think perhaps it was a bit too in-line with the tourist trail – more expensive, less authentic – for my liking. We spent a pleasant few hours wandering along the seafront and, ultimately, I left the town neither impressed nor disappointed. Quite simply, I would sum up Biarritz as nothing more or less than ‘a nice place’: worth seeing while you’re in the area, but not at the expense of nearby towns (which have, I think, more character and finer beaches) especially if, like me, you’re someone who prefers to stray off the beaten track. 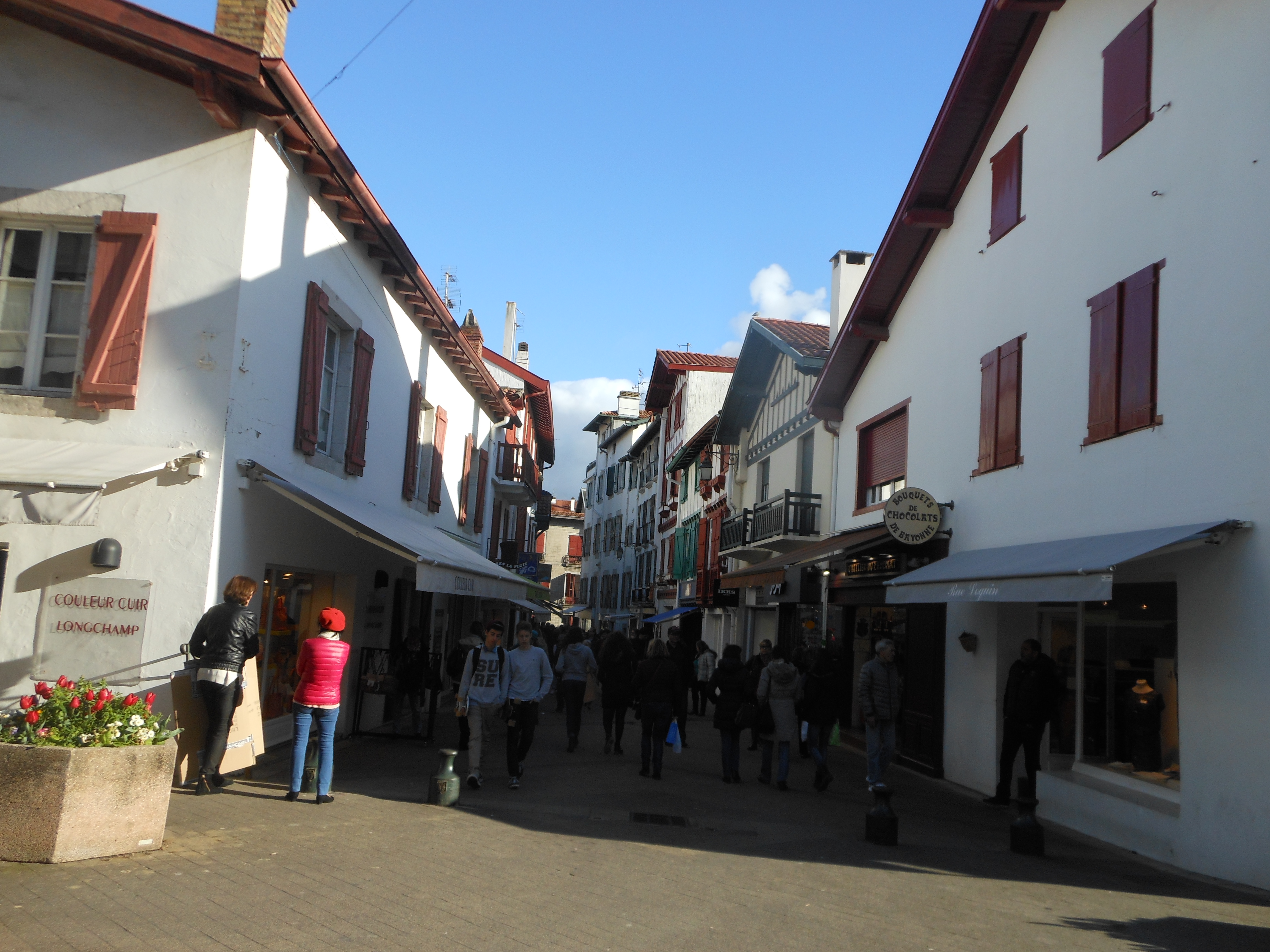 Next on the list was, without doubt, my favourite of the towns we visited in France. Situated only twenty kilometres from the Spanish border but somewhat less famous than Biarritz, Saint-Jean-de-Luz is a hidden gem on the Côte basque (indeed, it didn’t even make its way onto our itinerary until the day before the trip, when it was recommended to me by a teacher). The town is stunning. We strolled down street after street lined with beautiful Basque houses; as in Bayonne, deep-red shutters frame each and every window, but their colour is all the more striking against the whitewashed walls of these charming little chalets. We came across several boulangeries and chocolateries, a reminder that we were, in fact, still in France, but also that this area has a prominent identity of its own; as well as traditional croissants and pains au chocolat, we found on offer here a wide variety of other sweet treats, my personal favourite being the classic gâteau basque (‘Basque cake’).

Reaching the edge of town, the bay opened out in front of us and we continued our walk along the promenade and up to a viewing point across the cove. The panorama from here was, quite simply, breathtaking. The deep, definite blue of the sea expanded as far as the eye could see until it met, to our right, the softer baby blue of the sky. To our left stretched the coastline, the soft yellow sand outlining the water in a near-perfect curve. Behind the beach glinted the red shutters and white walls of the town. And all against the vivid backdrop of teal-green mountains rolling into the distance. Tranquillity and picturesque scenery with the hustle and bustle of a balmy coastal town – Saint-Jean-de-Luz definitely deserves a visit. 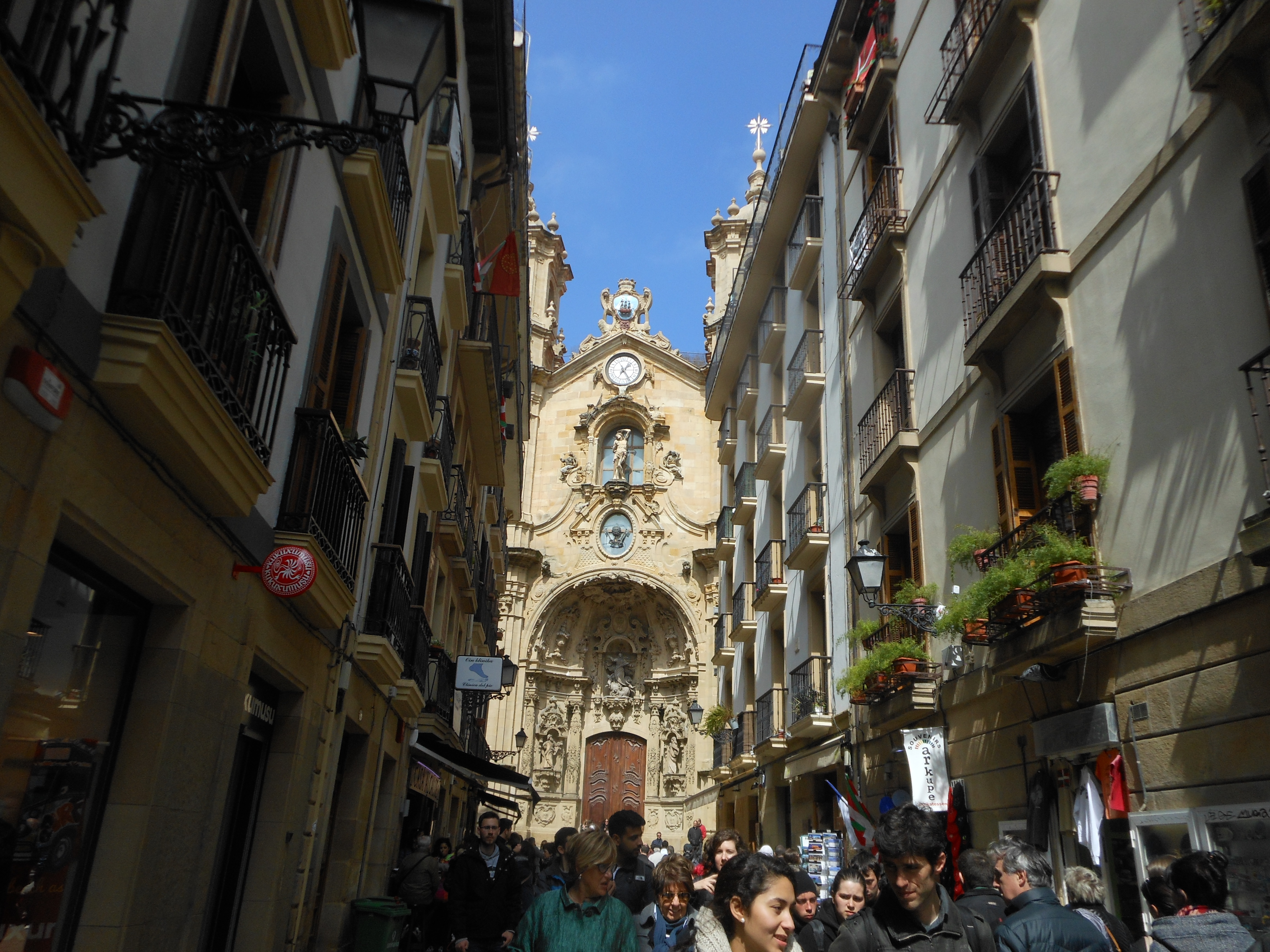 Walking the streets of San Sebastian.

Two days to go, one more place to visit. After negotiating several train delays, we eventually made it over the border to our final destination: San Sebastián (or Donostia, to give it its Basque name). Having never visited north-west Spain, I was initially unsure what to expect, but I am delighted to say that my first taste of the Spanish País Vasco was everything I hoped it would be. San Sebastián may be only a stone’s throw from France, but the rustic beauty of its narrow, balcony-lined streets instantly evokes a Spanish feeling. It has that dynamic atmosphere I have come to associate so strongly with the country, yet the region is, of course, quite unique; the Basque identity also prospers here and it was extremely interesting to witness this from both a cultural and linguistic perspective.

A highlight has to be the city’s vast array of bars, their counters hidden beneath plates and plates of traditional Basque tapas. We were spoilt for choice when it came to food, and everything we tried was delicious; the gastronomy is definitely not to be missed here! Another fantastic element of San Sebastián is the bay. Famously named La Concha due to its shell-shaped shoreline, it is a truly beautiful sight to behold, especially from the vantage point of the Sacred Heart statue at the summit of Mount Urgull. At the centre of the cove lies the Isla Santa Clara. We took a boat trip out there, something I would definitely recommend for the stunning views over the city and the water that this tranquil, secluded spot can offer. After two fantastic days, I left San Sebastián feeling that I had only touched the surface of a previously undiscovered charm – I will certainly be returning soon to see what else the Spanish Basque Country has to offer.

So that’s that; after a blissful few days eating, drinking and walking in the (rare) Basque sunshine, it was time to head back to my temporary home in central France. To say I enjoyed the trip would be an understatement: with buzzing cities, beautiful scenery and culinary delights, the Basque Country has something for everyone. Definitely one for the travel bucket list!